The company is better known for its industrial products, but it is servicing them that really counts in terms of the bottom line. Let's look in more detail at how important services revenue is, and at its future growth prospects

Industrial services matter to General Electric's profitability, and growing services profit is also a plus for its valuation. Services revenue has a tendency to decline less in an economic downturn compared to equipment orders -- a quality that reduces the cyclicality of earnings, and should encourage investors to pay a higher earnings multiple for the stock.

Looking ahead, there are three reasons to believe the company can boost its industrial service revenue.

Ultimately, it allows for greater interactive engagement with the client, which should result in additional recurring revenue (including services) for General Electric For example, embedded devices could monitor and then communicate when equipment needs servicing

At the company's Services & Industrial Internet Investor Meeting in October, CEO Jeff Immelt said: "One of the big paydays of analytics, I think, in services is going to be higher margins, better productivity; better analytics is going to drive a lower cost structure. So one part of innovation is the new products; the other part is really driving cost and productivity in a very accelerated way." 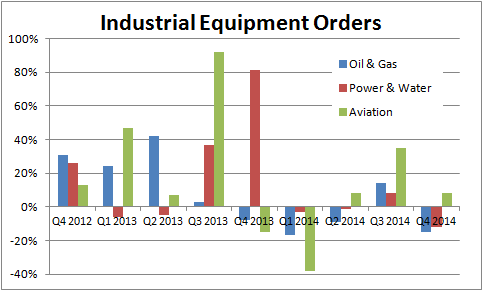 The reported 12% quarterly decline in power and water industrial equipment orders is an obvious concern, but Immelt said during the earnings call in Januarythat with the exclusion of a large Algerian deal in 2013, overall fourth-quarter orders were up 13%. In addition, the integration of the energy operations purchases from French company Alstom will add to service growth in the future. Power and water service revenue rose 3% for the full year.

The primary worry is with future service revenue from its oil and gas operations. The segment's equipment orders declined 15% in the fourth quarter and 8% for the full year, suggesting the 4% growth in service revenue for 2014 could be hard to replicate. 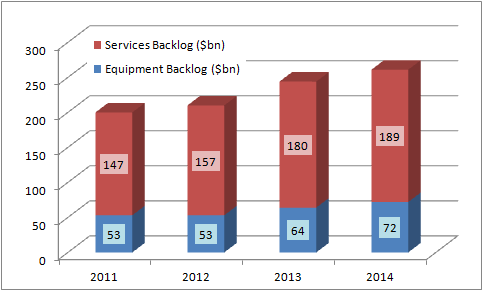 Meanwhile, its services backlog is strong, and the trend of its overall equipment orders (up 5% in 2014) supports future growth. Throw in the potential for the Alstom deal to increase future industrial services demand, and there is much to look forward to with General Electric.