Do you like beer or wine or distilled spirits? Ever think of investing in the businesses that make your favorite drinks?

While some investors won't touch alcoholic-beverage makers or other "sin stocks" -- and that's fine -- those of us who indulge from time to time, and even teetotalers, can find much to like in this category. The moats are big, the profit margins and cash flows tend to be fat, and -- for the best companies, at least -- the opportunities for global growth remain significant.

Here are two alcoholic-beverage companies that are worth watching. I say that because they're both in interesting spots: One is a great company that has stumbled a bit, the other is finding its way with a new (and fast-growing) product line.

They might not be ready for investment quite yet, but I think they're both worth a closer look if you, like me, are drawn to this space. Read on.

Trouble for this giant could spell opportunity for investors
Global booze giant Diageo (NYSE:DEO) is a great company that has hit a tough patch recently. That should always get investors' attention.

Diageo is a British company that owns the Guinness beer brand and a slew of big-name distilled-spirit brands. It has been a Foolish favorite for years, thanks to a terrific management team, great brands that go well beyond Guinness, a huge distribution channel, and a large presence in emerging markets, which would seem to bode well for long-term growth. (Full disclosure: Your humble Fool has owned Diageo since 2009.)

But check out the path taken by its stock price over the past year. 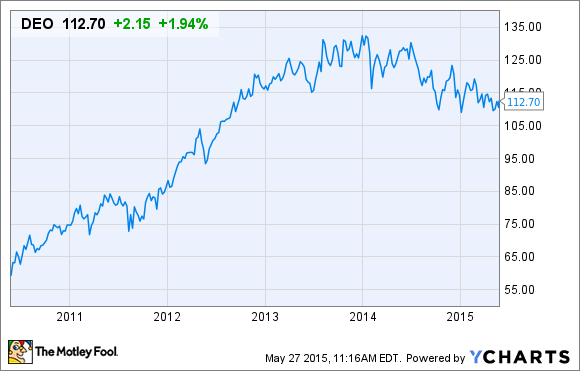 Diageo's 2014 efforts were hurt by the devaluation of several emerging-market currencies, by lackluster sales in developed nations, and by an anti-corruption crackdown in China that led to a sharp drop in boozy gift-giving among officials and executives.  Revenue was down 9% and operating income fell 18%. For U.S. Investors, the situation was made even worse by the dollar's appreciation against Diageo's home currency, the British pound, which (in dollar terms, at least) took another whack out of the company's value.

Sales fell another 0.7% in the most recent quarter, suggesting the company isn't out of the woods yet. But there's still much to like here, starting with its brands. Guinness, of course, but also Tanqueray gin; a slew of big-name rums including Captain Morgan and Myers's; Don Julio tequila; the Ketel One and Smirnoff vodka lines; a large portfolio of premium single-malt Scotch whisky brands including Lagavulin, Cragganmore, and Oban; a terrific blended-Scotch brand in Johnnie Walker; and a significant presence in premium American bourbon with the Bulleit line.

CEO Ivan Menezes is confident Diageo can return to growth, and he's working to reduce costs while the company looks to new markets and a few new products to get things going, including a new Guinness Golden Ale and a white-rum-based version of Captain Morgan. The stock price is probably still a little too high to make it a buy, but if growth heads in the right direction again -- or if the stock should drop below $100 or so -- it' will be worth close attention.

A big wine player jumps into the beer wars
For years, Constellation Brands (NYSE:STZ) focused mainly on wine, particularly California wine. With control of big-name operations including Robert Mondavi, Ravenswood, Clos du Blois, and the premium-but-affordable Black Box line, it has long been a relative powerhouse in a category with many small players but few dominant companies.

However, growth in wine has been somewhat hard to find lately.  That's why in 2013, the company jumped on an opportunity to buy the U.S. distribution rights to the famous Corona Extra beer, along with ownership of a Mexican brewery and several other brands.

That cerveza has given Constellation a huge boost. For the fiscal year ended Feb. 28, the company posted impressive growth: net income of $893 million (up 39%) on revenue of just over $6 billion. Better yet, the company announced its first-ever dividend, which it paid earlier in May.

Part of that gain was due to the timing of the acquisition (so don't expect those eye-popping rates to continue), but net beer sales did grow 12%, and the company is investing aggressively in its new beer brands, which also include the Modelo and Pacifico lines, to drive future growth. 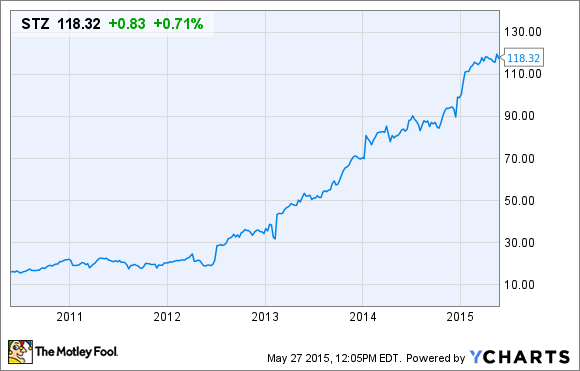 Wine (and the company's small spirits business, which includes Svedka vodka and Casa Noble tequila) has been less exciting recently. Sales were up just 1% in the year ended in February. And as you can see from the chart above, the stock has already had a tremendous run since 2010, but the growth potential of its Mexican beer businesses makes Constellation Brands a company worth watching.