Please ensure Javascript is enabled for purposes of website accessibility
Log In Help Join The Motley Fool
Free Article Join Over 1 Million Premium Members And Get More In-Depth Stock Guidance and Research
By Sam Mattera – Updated Oct 10, 2018 at 11:19AM

AeroVironment, GoPro, NVIDIA, and Amazon could offer investors upside as the market for drones matures.

This article was updated April 13, 2016, to account for ongoing shifts in the drone industry. It was originally published June 18, 2015.

Unmanned aerial vehicles -- drones, as they're commonly known -- remain in their infancy. Although the U.S. military has used them in various capacities for several decades, their civilian and commercial use remains limited. That should change soon. Research company The Teal Group believes spending on drones will double over the next 10 years, totaling more than $93 billion in the process. The Federal Aviation Administration projects that 7 million drones will fly over the U.S. in 2020, up from an estimated 2.5 million at the end of 2016.

For investors, the coming drone revolution represents an opportunity. Although it may be impossible to pick the winners and losers at such an early juncture, the following four stocks could benefit as drone use becomes more common. 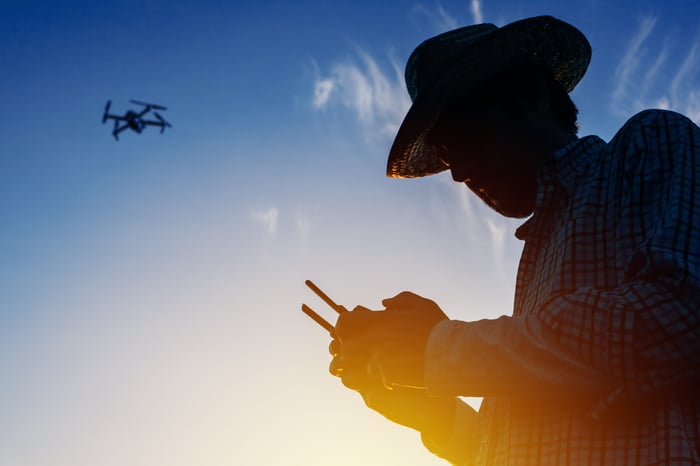 Still, that means about 90% of AeroVironment's revenue is coming from its drone business, which could allow it to benefit as the demand for drones surges in the years ahead. Currently, AeroVironment is largely a government contractor, with little exposure to the commercial drone market. Year-to-date, about 88% of AeroVironment's drone revenue was defense-related. Yet management believes it can establish a strong commercial drone business in the years ahead.

Already, AeroVironment has been working with some companies in a limited capacity. Oil giant BP used some of its drones to inspect pipelines in Alaska, for example, and the company plans to establish similar projects with other firms. Unfortunately, AeroVironment's management has declined to offer hard figures on this side of its business. On the company's earnings call in March 2016, COO Wahid Nawabi admitted that it wouldn't add meaningful revenue in the fiscal year, as its commercial drones remain in early development.

GoPro plans to break into the drone market

GoPro (GPRO -0.80%) hasn't sold a single drone. But that will change soon. The action camera company plans to release its first drone, the Karma, before the end of June. Unlike AeroVironment's products, it will be aimed explicitly at the consumer drone market. If nothing else, GoPro has a strong brand, and management believes that the company is uniquely positioned to succeed.

Unfortunately, important details about GoPro's quadcopter (like price and specs) remain unknown, but GoPro has released footage of its drone in action. In October, CEO Nick Woodman said it would appeal to a subset of GoPro's existing customer base, and that its relationship with distributors and retailers would give it an advantage.

There's clearly a market for consumer drones: Last May, Chinese company DJI raised $75 million at an $8 billion valuation. DJI is the current market leader for consumer drones -- it makes most of the models you'll find for sale on Amazon (AMZN 1.20%). DJI's revenue has been growing rapidly in recent years: The company projected its 2015 sales at $1 billion, up from just $130 million in 2013, according to The Wall Street Journal [subscription required].

In 2015, GoPro's revenue totaled roughly $1.6 billion, and analysts expect GoPro to generate about $1.7 billion in sales in 2017. If GoPro could become a meaningful participant in the drone market, its annual revenue could rise 50%-100%.

Tegra could power the drones of the future

NVIDIA (NVDA -2.30%) doesn't make drones, and it hasn't announced any plans to make one. But in the years ahead, NVIDIA could become a major supplier to the drone industry.

NVIDIA's mobile chip platform, Tegra, has been a relative failure when it comes to smartphones and tablets: Tegra-powered mobile devices are few and far between. Still, NVIDIA hasn't given up on Tegra; in fact, it's doubled down, rolling out a continuous slew of new Tegra models with ever-increasing power. The latest version of the Tegra, the Tegra X1, is among the most powerful mobile chips available. When NVIDIA announced it back in January 2015, it partnered with German automaker Audi to show how it could power the self-driving cars of the future.

Could it also power tomorrow's unmanned aerial vehicles? At the Consumer Electronics Show in 2015, drone-maker Parrot showcased a demo of a new consumer drone concept that relied on the Tegra X1's predecessor, the Tegra K1. And in later 2015, DJI announced Manifold, an embedded drone computer powered by the same chip. As the market for drones matures and their capabilities increase, drone makers may need increasingly powerful chips for their products. NVIDIA appears to be one chipmaker actively courting the industry.

A new way to ship

But of all the companies that could benefit from drones, Amazon may have the most to gain. In November 2013, Amazon unveiled "PrimeAir" -- a concept in testing that would allow it to deliver its customers' packages with drones. Last year, it reiterated its commitment. In an ad narrated by former Top Gear host Jeremy Clarkson, Amazon detailed how its drones would work, and promised a "whole family" of different models.

Amazon faces obvious technical challenges, but regulators could also pose a problem. Amazon spent $9.4 million on lobbying government officials last year, according to The New York Times, double what it spent in 2014. Amazon has many desires, but drone policy is central to its lobbying efforts.

Many industries are likely to adopt drones, but online retail could be completely revolutionized by it. Amazon is a monstrous company, but it still lags far behind the likes of Wal-Mart in terms of total sales. Last year, Amazon's revenue totaled roughly $107 billion, including the sale of non-physical goods (digital books and movies) and cloud services. Wal-Mart's net sales, meanwhile, exceeded $129 billion. Online shopping has its perks, but having to wait even two days is still too long many for many shoppers. Near-instantaneous drone delivery could be the final push Amazon needs to become America's largest retailer.

If you think drones have a bright future, Amazon may be among the best -- albeit indirect -- ways to invest.

Sam Mattera has no position in any stocks mentioned. The Motley Fool owns shares of and recommends Amazon.com, Costco Wholesale, GoPro, and Nvidia. The Motley Fool recommends AeroVironment and BP. Try any of our Foolish newsletter services free for 30 days. We Fools may not all hold the same opinions, but we all believe that considering a diverse range of insights makes us better investors. The Motley Fool has a disclosure policy.