I've never been a fan of Chesapeake Energy Corporation's (NYSE:CHK) dividend. It just never fit the company's growth-focused model, as Chesapeake always seemed to have better opportunities for cash as evidenced by the fact that it outspent cash flow for 22 of the past 24 years, according to Bloomberg data.

This seemingly never-ending cash-flow gap is why I've been questioning Chesapeake Energy's dividend for years, and I recently said that I thought its dividend was at risk of being cut. That's why I'm glad to see that the company has finally eliminated a dividend that it really shouldn't have been paying for most of the past 14 years.

Minding the gap
In axing its quarterly dividend, Chesapeake Energy will save about $240 million per year in cash that can be better used elsewhere. By cutting that cash outlay, Chesapeake Energy can begin to narrow the growing gap between its capex and cash flow, which has widened along with weakening commodity prices. In fact, prior to the dividend elimination, analysts projected that the company's cash flow shortfall would reach $2.1 billion this year, and $2.7 billion in 2016.

In addition to the dividend elimination, Chesapeake Energy is eliminating another recurring cash outflow, as the company also announced that it's redeeming the preferred shares of its CHK Cleveland-Tonkawa subsidiary. That redemption is a direct result of the company's recent sale of properties in Oklahoma for $840 million that also subsequently included the sale of adjacent properties to the same buyer for another $90 million in cash. As a result of these transactions, Chesapeake Energy will eliminate $75 million in annual preferred dividend payments, which will reduce its annual preferred dividend obligations to $155 million per year, and further reduce its expected cash-flow gap.

The dividend really had to go
Chesapeake Energy's dividend was always tough to justify, as it had only been paying a pedestrian dividend that really didn't enhance investors' returns. Particularly because the yield itself was low. Only more recently has the yield increased to the point where it could have been viewed as compelling for new investors; however, the only reason why the yield increased was because the stock price plunged.

We can see this inverse relationship on the following chart: 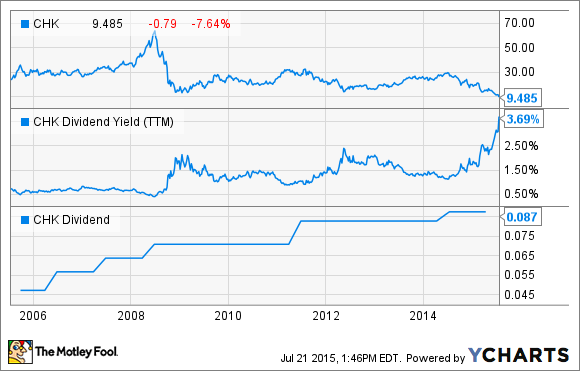 Aside from not driving shareholder returns, the real reason why no dividends should even have been paid to investors is the simple fact that dividends are meant to return excess cash that's not needed to fund growth. However, given that the company almost never generated excess cash, the dividend simply never made sense. Instead, the more than $200 million in cash the company annually sent back to investors should have been used to reduce the recurring gap between capex and cashflow.

While eliminating the dividend earlier wouldn't have prevented most of these shortfalls, it would have reduced some of the debt the company used to bridge the gap. That debt has been collecting interest for years, and has acted as a weight on the stock price whenever commodity prices are weak.

Investor takeaway
More often than not, dividend cuts, or eliminations, are an ominous sign for a company. Given the reaction of Chesapeake's stock, this might seem to be the case.

However, in this case, Chesapeake Energy's dividend elimination is welcome news. The company should have never been paying a dividend in the first place due to the simple fact that it almost never generated excess cash flow. Further, the payout was never high enough to be a compelling driver of shareholder returns, and the case could be made that it really had a negative impact on returns, as the dividend was basically being paid with borrowed money. This was simply a move that should have been made a long, long time ago.