What: Shares of Capital One Financial (NYSE:COF) are trading lower by more than 12% after the company reported earnings that fell well below the market's expectations.

So what: Capital One's earnings of $1.50 per diluted share were down 25% from the year-ago period.

Excluding restructuring expenses, it reported earnings of $1.78 per share, well below the consensus estimate compiled by Bloomberg of $1.97 per share. Underlying the earnings decline was a massive jump in provisions for credit losses, which grew 21% year over year to $1.1 billion.

The company's commercial loan book is showing signs of credit problems. Where delinquency and performance trends were mostly stable in its cards and consumer banking, commercial banking saw a sizable jump in its nonperforming loan rate, which jumped from 0.31% to 0.90% quarter over quarter. 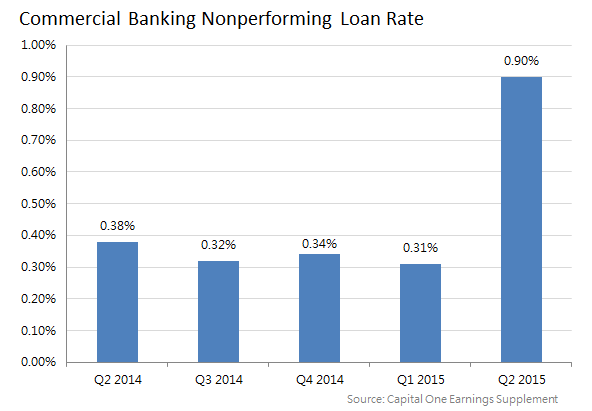 The company's lending exposure to energy companies and taxi medallions appears to be the primary driver of commercial lending weakness. On the conference call, the company noted that it had $3.4 billion in oil and gas loans, and a medallion loan portfolio of "less than $1 billion." For perspective, the commercial lending unit reported $51.2 billion in total loans outstanding at the end of the period.

Now what: It's never a good sign to see a bank miss earnings, especially on the back of significant year-over-year increases in loss provisions. Commentary on the conference call suggests that Capital One expects slightly higher loan losses in many of its business lines going forward, and higher provisions were intended to build reserves against these losses.

Chief Financial Officer Stephan Crawford opined to one analyst that their expectations hadn't changed. In credit cards, its largest source of interest income, he noted that the company expects losses in the "mid-to-high 3% in the fourth quarter of 2015 and higher from there."

If there's anything to glean from Capital One's performance it's that the period of historically low loan losses across its business lines may be coming to an end. As loss rates normalize (increase), the company's earnings may remain under pressure for some time to come.