Microsoft (NASDAQ:MSFT) recently acquired Incent Games, the developer of sales "gamification" platform FantasySalesTeam. The platform, based on fantasy sports, splits sales reps into teams that earn points for every task they accomplish -- such as closing deals or scoring new leads.

Microsoft will directly integrate the platform into its Dynamics CRM suite. The terms of the deal were not disclosed.

FantasySalesTeam can natively connect to Dynamics CRM and salesforce.com's (NYSE:CRM) CRM platform. Through its APIs, it can also process data feeds from other CRM platforms. After the acquisition closes, FantasySalesTeam will still connect with Microsoft's rival platforms, but it will offer tighter integration with Dynamics CRM. In a recent blog post, corporate VP of Dynamics Bob Stutz explained that making individual and team results more visible through gamification would generate "positive" and "impactful culture change" at companies.

How much does Dynamics CRM matter?
Dynamics, along with Office 365 and Azure, are the three pillars of Microsoft's cloud business, which achieved 88% annual sales growth last quarter, with an annual revenue run rate of over $8 billion.

Microsoft didn't disclose exactly how much of that total came from Dynamics, but it's estimated that most of it came from Office 365, followed by Dynamics and then Azure. Microsoft reported Dynamics' annual growth figures for the first time last quarter, stating that revenue rose 6% annually as its online install base more than doubled.

Research firm Gartner estimates that global CRM spending rose 13.3% annually to $23.1 billion in 2014. Within that market, Salesforce was the market leader with an 18.4% share, followed by SAP at 12.1% and Oracle at 9.1%. Microsoft came in fourth with a 6.2% share. Based on those figures, we can estimate that Dynamics generated about $1.4 billion in revenue last year -- which equals less than 2% of Microsoft's fiscal 2014 revenue.

The effect of fantasy sports and gamification
Dynamics might not be a major growth engine for Microsoft yet, but gamifying the system with FantasySalesTeam could yield positive results.

According to the Fantasy Sports Trade Association, the estimated number of fantasy-sports players in the U.S. and Canada soared from 12.6 million in 2005 to 56.8 million this year. This means that employees are more likely to embrace the FantasySalesTeam system over older CRM solutions. Gamified fitness apps and wearables have also become wildly popular in recent years, indicating that gamifying mundane tasks increases personal discipline with structured rewards.

Plenty of companies have taken notice. Just a year after FantasySalesTeam launched in 2013, over 75 customers had deployed the system, including some large enterprises. 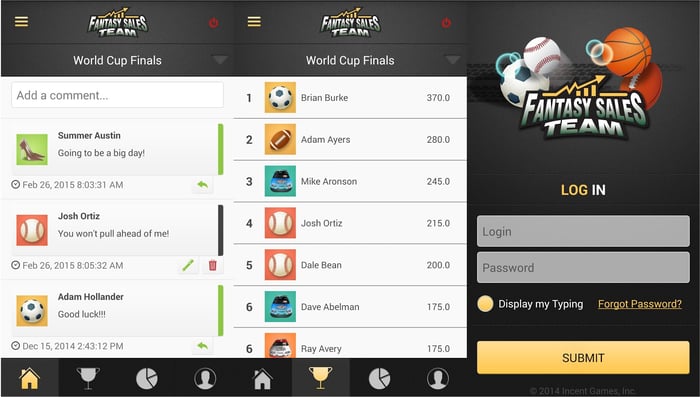 Why Microsoft investors should care
In April, Microsoft CEO Satya Nadella boldly claimed that his company could generate $20 billion in annual cloud revenue by the end of fiscal 2018, which would be equivalent to about a fifth of Microsoft's 2015 revenue. Dynamics must keep growing, alongside Office 365 and Azure, for Microsoft to achieve that ambitious goal.

The CRM market still represents a small part of Microsoft's business, but its growth potential was significant enough for Microsoft to consider buying Salesforce for $55 billion earlier this year. Microsoft wisely backed down from that massive acquisition, but it continues to expand its business applications presence with smaller purchases. In addition to Incent Games, Microsoft also acquired FieldOne Services, a developer of field-service applications for businesses, last month.

More acquisitions ahead
With the Salesforce acquisition off the table, investors should expect Microsoft to make similar, smaller deals in the near future. After all, the top five players claimed only half of the global CRM market last year. The remaining half consists of small but rapidly growing players such as SugarCRM.

With over $96.5 billion in cash and short-term investments, Microsoft could scoop up smaller CRM or business applications companies to expand Dynamics' presence. It could also make other purchases to strengthen Office 365 and Azure, to boost the cloud unit's growth toward Nadella's $20 billion target.