Shares of Chevron (NYSE:CVX) have reached a point that they have not reached in the past 20 years. They are trading for less than the tangible book value of the company. By now, most investors are aware that today's energy market is not great, but is it worse than the market at the bottom of the financial crisis? Is it worse than the oil rout in the late '90s from the Asian financial crisis? Even during these times of distress for the energy market, shares of Chevron never traded at these kinds of lows. 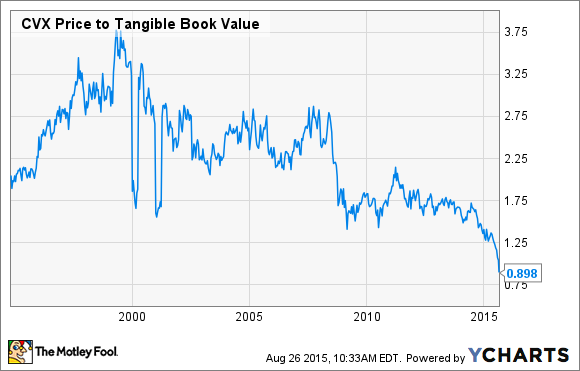 So let's take a look at why Chevron's stock has been hit so particularly hard recently and whether the distress under which it finds itself today is worse than what we saw over the past 20 years. Maybe this is just a sign that it is time to buy.

Why so bearish on an industry giant?
Chevron has had a bit of a bad rap as of late. Compared to all of its peers in the integrated major space, it has the most exposure to the exploration and production side of the business versus the others that have larger refining, chemical, and retail operations. With such an emphasis on the upstream side of the business, you would expect the company to be much more efficient at managing costs for that side of the business. However, as we saw last quarter, its costs have not come down enough to compensate for the decline in oil prices.

The other component that makes Chevron's investors slightly more nervous than those of the other Big Oil players is that despite some cuts to its capital spending budgets, the company is still not able to meets its budgetary goals with the cash that it generates from operations. Over the past 12 months, cash from operations has generated $24.7 billion, but its capital expenditures and dividend payments were $41.7 billion over that same time frame. This has forced the company to sell off assets at a higher than normal rate as well as take on a decent amount of debt to fill the spending gap. Chevron certainly has the financial flexibility to do this for several quarters, but this is not something that can happen in perpetuity.

Too much panic
As much as these issues above and the decline in oil and gas prices over the past year or so are concerns for Chevron's future, it is still hard to imagine that these threats translate to the company being worth $100 billion less than it did just one year ago. 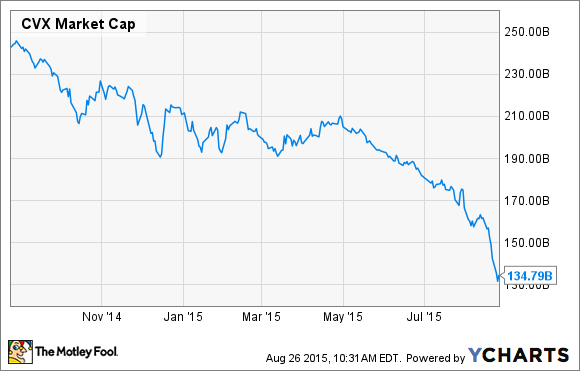 The first thing investors need to probably remind themselves with a company like Chevron is that this is not the first price collapse it has had to deal with. It may have not been in the best position at the beginning of this oil price decline, but it has shown over the years that it has the ability to adjust to these sorts of issues. Also, the company's AA credit rating means that its financial standing is equivalent to that of the United States Treasury. With that standing comes an immense ability to raise cheap capital that can help it bridge any funding gaps.

Another thing to consider here is that the company working through a few long-term projects that consume a lot of capital, most notably its Gorgon and Wheatstone LNG facilities in Australia. According to management, Chevron is spending about $8 billion annually on construction of these two facilities. In 18 months, both of them will be up and running. When you also add the cash generation from Gorgon and Wheatstone -- both have long-term LNG sales contracts -- and the reduction in capital spending from these coming online, it will help to significantly swing that cash deficit issue back in Chevron's favor.

Good time to buy?
So therein lies the debate for someone looking at buying shares of Chevron today. Based on the its capital spending needs to get its long-term projects up and running, it could take a few quarters before things get better. Once they do, though, Chevron should be in a pretty good position afterwards. So you have to ask yourself whether it's worth buying shares today and wait until things turn around. Based on the price for a share of Chevron today, that is a pretty tempting proposition.

By almost every measure of valuation, a share of Chevron gives you more than what a share in any of its Big Oil peers do today.

The one that you should really look at here is price to tangible book value. Since all of these companies are in the business of selling commodities, profits can change wildly and may not give the most accurate picture of the long-term value of the company. Price to tangible book, however, is more related to the price paid for the assets that the company owns. What this means is that the market is valuing shares of Chevron for less than the book value of its assets minus its total debt. This is the first time in 20 years that shares of Chevron have traded for less than book value, which suggests this is one of the best times to buy shares of Chevron in recent history.

What a Fool believes
Just about everyone talks a big game when it comes to investing in great companies when the market is down and everyone else is panicking, but very few are actually able to make those investing decisions when times get rough. Well, it appears as though the market has undervalued shares of Chevron to what could be considered a historical low. So are you willing to look past the market hysteria?