A major earnings miss and "We're doing what we can" from management were not what shareholders wanted to hear.

Some of the comments in Chevron's (CVX 1.65%) recent earnings release and the knee-jerk market reaction from the market can only really be described this way. The company's not-even-close earnings miss sent shares sliding, and the combined effect of tumbling oil prices recently suggests that Chevron and others could be struggling for longer than many are willing to wait. Here's a quick snapshot of what you need to know about this past quarter.

This past quarter's asset impairments can be best seen in the company's segmented earnings, as seen in the following chart: 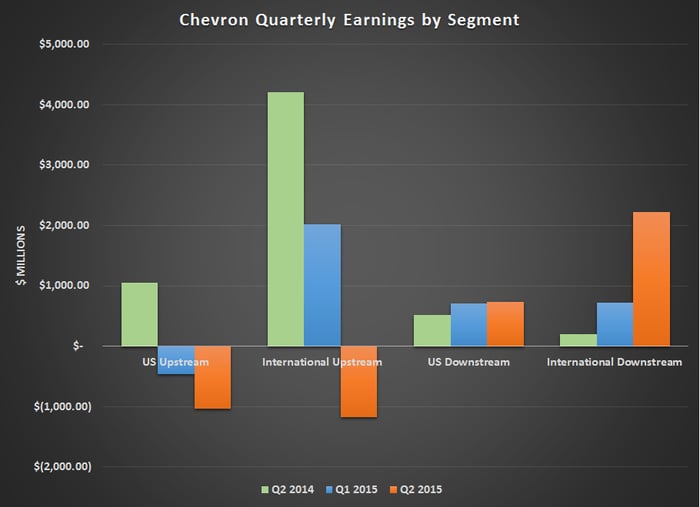 The other aspect of these numbers that really pops out on the page is the big uptick in interntaional downstream earnings. We have seen several companies see large increases in downstream earnings this past quarter, but in this case, Chevron's numbers are a bit of a red herring. This quarter's profits were slightly inflated because the company sold a 50% stake in its Australian retail business Caltex Australia, which netted the company $1.6 billion. Without this big boost, international downstream earnings would probably have been much more in line with the first quarter of this year.

We tend to lump big oil companies like Chevron and others into one conversation because they are big, diversified companies in the oil and gas space. However, each has its own little unique traits that sometimes work for or against them. Of the oil majors, Chevron's defining trait is that it is much more dependent on its upstream production for its profits than its peers. So while earnings for others in the space have been propped up by downstream refining and chemical manufacturing, Chevron has not had that luxury.

If there was one thing that might let investors breathe a slight sigh of relief, it was that cash flow numbers fared much better than earnings. So far in 2015, Chevron has generated about $11.6 billion in operational cash flow, which is 31% less than last year. It's still not enough to cover the company's current capital expenditures and dividends, but every dollar helps as it is still plowing loads of capital into its Gorgon and Wheatstone LNG projects.

Outlook
Just about everything Chevron rests on the completion of the Gorgon and Wheatstone LNG projects. As CEO John Watson put it in the company's press release:

Project execution on our Gorgon and Wheatstone Australian LNG projects is a priority for us. Incremental production and cash generation from these projects and others, along with a curtailed capital program, should provide support for continuing competitive shareholder distributions.

One can only hope that this is true, because these two projects are huge bets for the company. Combined, the cost of these two facilities is equivalent to about one-quarter of the entire company's market capitalization. Simply bringing them online and not having to spend money on their development will help the bottom line, and the long-term contract structure of their LNG sales should provide steady cash flows going forward.

These projects cannot get brought online soon enough, though. For several quarters now, Chevron's spending has wildly outpaced its cash-generating capabilities and it has been forced to fund some of its spending and dividends with asset sales and debt issuance. It's a move that Chevron does not want to continue long term.

What a Fool believes
Things aren't going to look much better for the next couple of quarters for Chevron as long as oil prices remain low and the two Australian LNG facilities are under development. So investors who are betting these projects will help right the ship will need to wait out some very rough waters in the meantime. If you are looking at Chevron as a potential value investment, just keep in mind that it's entirely possible that things could get worse before they get better.