Despite low oil prices fueling sales of SUVs and trucks, Ford's and GM's stock prices have failed to move higher. However, that doesn't mean there hasn't been a positive impact for the companies.

Cheers, America! It's been quite some time since we've cringed at ridiculously high gasoline prices that grabbed far too many greenbacks from our wallet when filling up -- we've now enjoyed about a year of cheap prices at the pump.

This is having a positive impact on many industries, but how much of a boost is it for investors of Ford Motor Company (F -2.72%) and General Motors (GM -1.99%)? 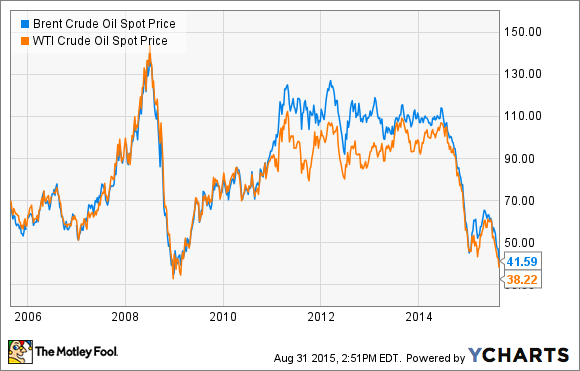 Oil price plunge
In the last year alone, Brent crude and WTI crude prices have declined nearly 60% and are still down a respective 45% and 49% from half a decade ago. Heck, oil prices are knocking on the door of lows not seen since the Great Recession, when the world economy was in far much more turmoil than it is today.

For investors, this is a very good thing on multiple fronts. Obviously, as consumers pay less at the pump, there is more cash left over to be spent on consumer goods or big-ticket items such as a new car. Which new vehicles look especially appetizing with cheap gas? The answer, of course, is SUVs and full-size trucks -- which generate far better margins and profits for Ford and General Motors.

So just how much is cheap gas fueling sales of these vehicles, and is there a measurable impact on profit margins and bottom-line earnings for Detroit automakers? Let's dig in.

Now, as General Motors and Ford both sell far more SUVs and full-size trucks in North America, the recent uptick in sales should boost operating margins. 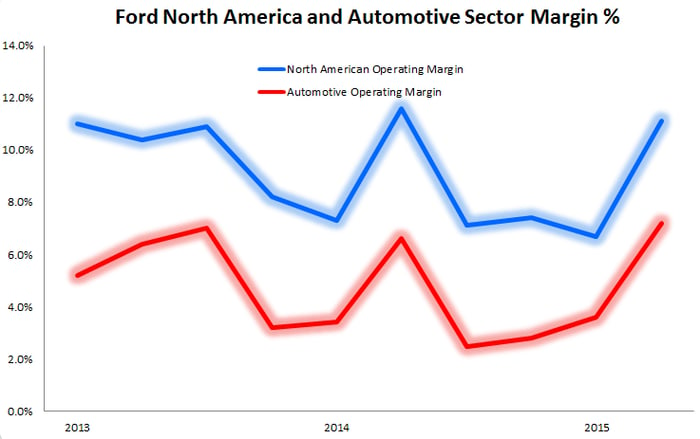 To add some context, the three-quarter dip in the graph between 2014 and 2015 is mostly due to the higher costs associated with Ford's launch of more new or significantly redesigned vehicles than it had launched in any other year in its history. That aside, Ford has still posted its two best operating margin performances in recent history after 2014, when gas prices began to slide and SUV sales started to accelerate. Here's a look at General Motors' EBIT-adjusted operating margins, which is even more indicative of how higher SUV and truck sales influence margins. 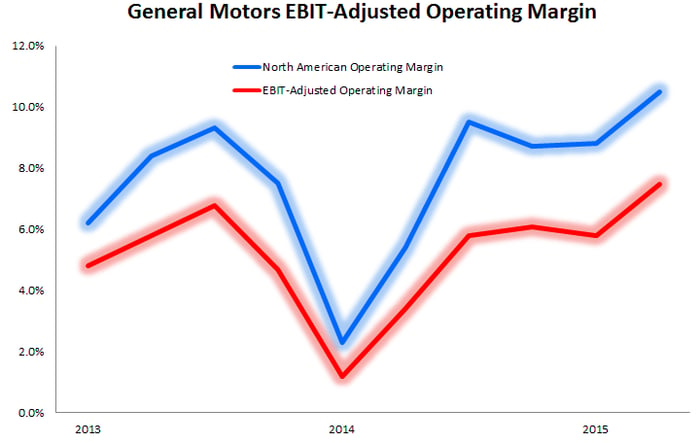 Both Ford's and GM's operating margins had a significant boost in the recent quarter, and GM has also posted its best two quarters of EBIT-adjusted operating margins since gas prices began to slide lower. In fact, not only was GM's second-quarter EBIT-adjusted margin of 10.5% a quarterly record, but it was the eighth consecutive quarter of year-over-year margin improvement based on core performance.

Furthermore, GM's EBIT-adjusted operating margins in North America over the past four quarters averaged 9.4%, which is much higher than the mid-single digits that investors have been accustomed to in years past.

Both graphs also hint toward the fact that SUVs and full-size pickups heavily boost North American margins compared to the rest of the world -- and the gap between the two would be more pronounced if I excluded North America results from overall EBIT-adjusted operating margins.

Ultimately, as long as cheap gasoline prices stick around and Detroit automakers continue to improve fuel economy of larger SUVs, investors should remain very optimistic that the automakers' margins and profits will remain at high levels -- and that's good news for shareholders.