Please ensure Javascript is enabled for purposes of website accessibility
Log In Help Join The Motley Fool
Free Article Join Over 1 Million Premium Members And Get More In-Depth Stock Guidance and Research
By George Budwell - Sep 7, 2015 at 8:43AM

The markets have been on a roller coaster-like ride over the past few weeks. Here are five dividend stocks that could anchor your portfolio during these turbulent times.

The markets have been nothing if not volatile of late. But before you go stuffing all your cash in a mattress, consider this chart: 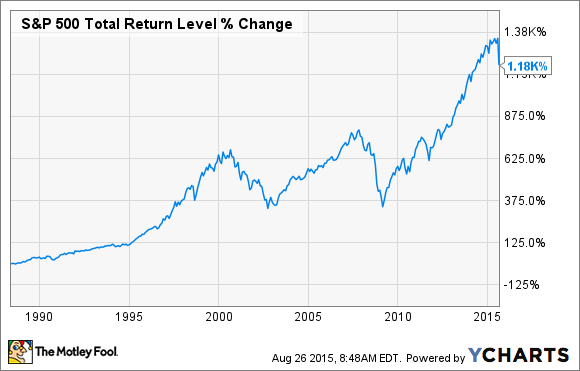 The overall trend for the broader markets is up, especially when factoring dividend payments into the equation. So it might be a wise move to start moving some money into less risky types of stocks, and into, perhaps, stable large-cap companies with sustainable dividend payments.

AbbVie is a top dividend stock primed for long-term growth
AbbVie's stated goal is nothing less than to serve up industry-leading growth, and so far, it's fulfilling that goal in spades. In the second quarter, for instance, the drugmaker generated $5.475 billion in revenue, a 19.4% rise over a year ago, on an operational basis. That kind of double-digit revenue growth is nearly unheard of among big pharmas, but it has essentially been an AbbVie hallmark since Abbott Laboratories spun off the company in 2013.

This strong revenue growth has enabled the company to up its dividend several times over the past two years, giving it one of the highest yields in the healthcare sector -- 3.23% at current levels. That said, AbbVie does sport a 12-month, trailing dividend payout ratio of 73% (expressed as annual dividend per share divided by free cash flow per share), suggesting that further increases are unlikely in the near-term.

Turning to AbbVie's long-term outlook, management believes its recent acquisition of Pharmacyclics will begin to add to AbbVie's earnings in a meaningful way by 2017 and potentially drive earnings to more than double by 2020 -- depending, perhaps heavily so, on how the patent expiration for its flagship anti-inflammatory drug Humira plays out in terms of the timing and impact of biosimilars hitting the market.

Bristol-Myers' new immuno-oncology drug, Opdivo, is a game-changer
Bristol-Myers is starting to emerge from the patent cliff thanks to its PD-1 inhibitor Opdivo that's proving to be a major advancement in the fight against cancer. Although the drug has garnered only two regulatory approvals as a monotherapy in the U.S. thus far -- for advanced melanoma and metastatic squamous non-small-cell lung cancer, respectively -- its sales rose more than 300% in the second quarter to $122 million, just from the first quarter alone. Furthermore, the drug is on track to rack up several additional approvals in the U.S. and EU in the coming months, and that should ratchet up sales even further.

Given that Opdivo's peak sales could reach into the $8 billion stratosphere according to some analysts, and that Bristol already sports over $10 billion in cash, the company's sector average dividend yield of 2.47% looks, to me, to be sustainable for the long term. Even so, it is important to note that Bristol has one of the highest cash payout ratios in the sector at a noteworthy 154%, resulting, in part, from the loss of patent protection for former top selling drugs and the sale of its diabetes assets to AstraZeneca.

Gilead has plenty of dry powder to fund its significant shareholder rewards
Gilead isn't known for its dividend, because it only recently initiated a payout. But with over $14 billion in cash at the end of the second quarter and a history of staying away from bank-breaking acquisitions (with the one exception of the brilliant $11 billion deal that netted blockbuster hepatitis C drug Sovaldi), Gilead is probably going to significantly ramp up its meager yield that currently sits at 1.6%.

What makes this stock "low-risk," though, goes beyond its strong financial position and has everything to do with management's rock star-like ability to identify promising clinical candidates and subsequently bringing them to market in record time.

Right now, Gilead has several intriguing experimental products aimed at liver diseases, infectious diseases, and various cancers that haven't gotten much respect from the Street. In fact, the stock is currently trading at a highly compressed P/E ratio of 11.2, relative to its biotech peers. As history has repeatedly shown, however, Gilead's pipeline is one of the most productive in all of big pharma and big biotech, giving investors good reason to feel comfortable holding this stock for the long term.

Johnson & Johnson takes care of its shareholders -- in good times and bad
Aside from it being a Dividend Aristocrat, J&J is a favorite name among income investors because the company has returned the bulk of its cash to shareholders through share repurchases and dividend increases, and its total gains (including dividends) have beaten the broader markets for two decades running.

J&J's safety factor nevertheless comes from its industry-leading pharma pipeline. Not only did the IDEA Pharma Productive Innovation Index for 2015 recently rank J&J's pipeline as No. 1, but the Big Pharma is also on track to potentially bring another 10 blockbusters to market in the next three years. Adding to its safety factor during turbulent times, J&J has one of the strongest balance sheets in the industry, with over $10 billion in cash and cash equivalents at the end of the second quarter.

Given its strong balance sheet, clinical pipeline, and reasonable cash payout ratio of 60%, J&J's sector-beating yield of 3% therefore looks safe for the long-term.

Pfizer's return to growth is finally taking shape
Pfizer has long been a favorite name among income investors, but it hasn't attracted many folks seeking growth because of its nasty run-in with the patent cliff. Put plainly, Pfizer's stock has struggled mightily for the better part of a decade as a result of exclusivity periods expiring on its key drugs. That said, the drugmaker's newer products, such as its breast cancer drug Ibrance and its pneumococcal pneumonia vaccine Prevnar 13, are starting to help it turn the corner in terms of top-line growth. Looking a bit further down the line, Pfizer is also building out a potentially game-changing immuno-oncology pipeline, and its experimental PCSK9 products aimed at lowering bad cholesterol could also be future blockbusters for the drugmaker.

Now, Pfizer does have a problem with its legacy product portfolio, and this issue is only going to get worse as generic competitors continue to clobber key products such as Celebrex. But keep in mind that Pfizer has over $30 billion in liquid assets alone that it could put to work to acquire another drugmaker with better growth prospects. This mountain of cash, and a cash payout ratio that presently stands at 50%, also suggests that its sector-beating dividend yield of 3.45% is safe.

Should you pick up these stocks right now?
I think all five of these stocks would be great pickups for investors looking for relatively safe plays in such a violent market. While the sustainability of some of their dividends may look questionable at present (especially AbbVie and Bristol), their strong cash flows, balance sheets, and emerging clinical pipelines all give them a comfortable economic moat -- even in a worst-case scenario where global economic conditions continue to deteriorate. And in sunnier times, these dividend stocks should continue to provide market-beating returns because of their top-notch clinical portfolios that provide deep value for investors with a long-term outlook.