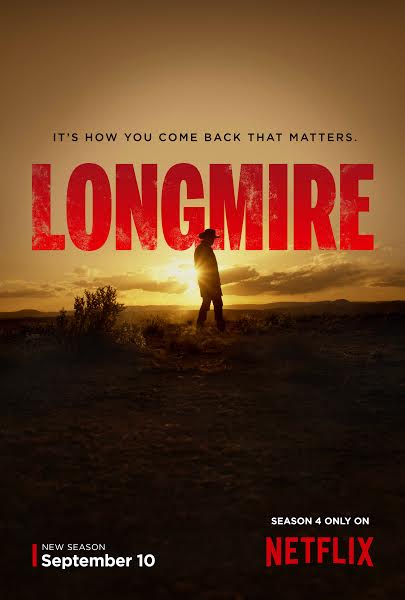 We are now just a few hours away from the next Netflix (NFLX 4.15%) exclusive. Longmire -- the fourth season of the Western serialized mystery drama -- hits Netflix's growing digital vault on Friday.

The first three seasons aired on A&E Network, but when the cable network bailed on the show last year, it was simply a matter of time before Netflix rode in to save the day.

This isn't the first time a show airs for three seasons, gets canned, and Netflix negotiates a fourth round of episodes. We saw this happen with Arrested Development, though those fans had to wait a lot longer between seasons than what Longmire fans are going through as they count down the clock until midnight. Netflix also bankrolled a fourth season of The Killing.

Why would Netflix want a show that couldn't cut it on cable television? Well, let's back up a bit. Industry watcher Deadline calls Longmire the most-watched original drama in A&E's history. Viewership peaked during the second season, with an average of nearly 6 million watchers, up 9% since the first season. The audience dipped to an average of 5.6 million viewers during the third season, bud Deadline credits the decline to A&E going from using the original The Glades as a lead-in during the second season to just using Criminal Minds reruns last year. When your lead-in slot sees viewership tank by 72%, it's going to be hard for even a cult favorite to gain traction.

It's not just Netflix picking up a critically acclaimed show from the cancellation dumpster. Next week, we find Hulu as the new home for the fourth season of Mindy Kaling's The Mindy Project.

It's never been easier to breathe new life into dead shows, as long as the right audience was watching before cable networks and broadcasters moved on. Streaming services have given Community, Ripper Street, and Degrassi a way for fans to continue their viewing relationships.

Naturally, not every show deserves a second chance. I'm not necessarily talking about you, Full House, but stay close when Fuller House debuts. I have my doubts.

However, it's hard to question the logic. A cancelled show has a built-in audience, and even if one can argue that it's hard for someone to hop into a serialized drama like Longmire without having caught it the first time around, that misses the entire point of what Netflix is doing.

Netflix is helping get the fourth season off the ground, but it's also been streaming the first three seasons. It has four seasons of content -- not just one -- for folks who stumble upon the show over the weekend. Netflix is also a data-crunching beast. It knows the viewership trends of the first three seasons through its leading platform. It probably knows what will work and what won't work better than Hollywood executives. That's a meatier advantage than you probably think, making it easier to make these big life or death decisions on cancelled network shows.

The third season of Longmire ended on a cliffhanger that is about to resolved. Netflix doesn't have to worry about these pesky unknowns when it's armed with data.