It has taken a lot of hard work, but a number of oil companies have gotten their costs down to the point where they can handle a $50 oil price. It's not an ideal scenario by any means, but for Whiting Petroleum Corp. (WLL), it will mean that the company can generate just enough cash flow to keep its production flat next year. That ensures its survival if oil remains weak for a few years, while also positioning it to grow once prices rebound.

It's all starting to come together
There are three vitally important factors that are all working together to enable Whiting Petroleum to make a $50 oil price work next year. It all starts with its costs, which have been declining through a combination of oil-field service price reductions, materials cost deflation, and efficiency gains. That's allowing the company to simply produce more oil for less money.

On top of that, production from the company's legacy oil wells is starting to flatten out. It's a well-known fact that production rates from horizontal wells initially decline very rapidly before eventually flattening out at a much lower rate. We can see this decline curve on the slide below: 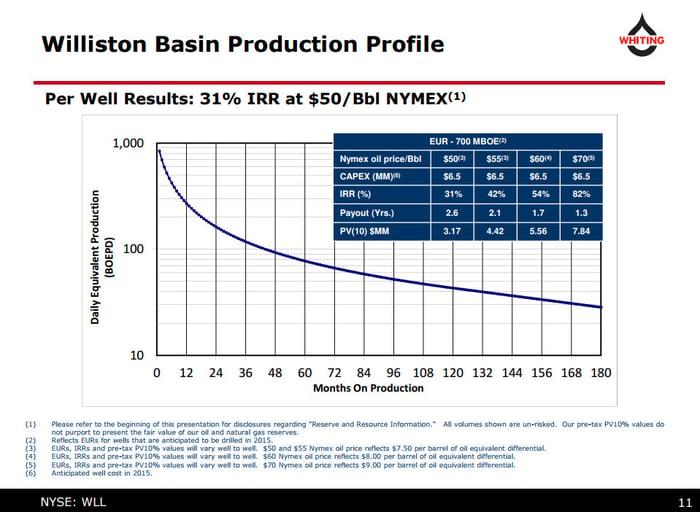 As this flattening happens, the company needs to drill fewer wells to replace the lost production from these legacy wells. At one point, this steep initial decline rate meant that three out of every four barrels added by Whiting and its Bakken shale peers were just replacing legacy production declines. 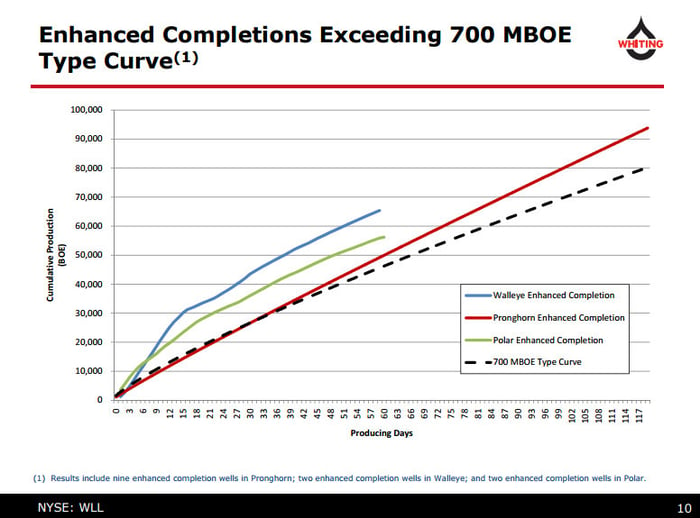 More oil, less money
The net result of these three factors is that Whiting Petroleum will need to spend far less money next year just to keep its production flat. In fact, it estimates that at a $50 oil price, it will generate about $1 billion in discretionary cash flow. That just matches the amount of capex it would need to spend to keep production flat at its current decline rate, cost profile, and new well production rate. Furthermore, the new wells that it does drill can still deliver a compelling internal rate of return of 31% in the Bakken and 22% in the Niobrara.

The $1 billion capex need next year represents a significant reduction from the company's 2015 capex plan. After several revisions, Whiting had settled on a plan to spend $2.15 billion this year, which would result in 6.5% production growth. Any production growth is likely out of the window next year. That is largely because Whiting Petroleum won't generate as much cash flow at a $50 oil price in 2016 due to the fact that its cash flow this year was supplemented by oil hedges that were set at much higher oil prices. With those hedges rolling off, Whiting will have much less cash flow to work with, leaving it with roughly $1 billion to invest, which again is now just enough to keep production roughly flat.

While it's not an ideal scenario, it is one that will enable the company to keep its head above water for the time being. It will also buy it time to continue to improve its balance sheet, which it plans on doing by selling higher cost non-core assets. That will improve its financial flexibility and set the company up to grow once oil prices do improve.

Investor takeaway
A few years ago, it was thought that shale drilling would be toast if oil prices collapsed. That has proven not to be the case as a combination of factors is leading to much lower costs, enabling companies like Whiting Petroleum to survive at a $50 oil price. What this also means is that when oil prices go up, companies like Whiting should be able to cash in.