This past April North Dakota finally hit the magical mark of a million barrels of oil production per day. The state had expected to hit that mark late last year, but Mother Nature had other plans and really wreaked havoc on the plans of oil and gas drillers like Kodiak Oil & Gas (NYSE: KOG). But as much as producers blame the weather for holding back America's energy boom, that's not the main culprit. Instead, it's the steep production declines at the wells previously drilled by Kodiak Oil & Gas, Devon Energy (NYSE:DVN), and Continental Resources (NYSE:CLR) that's really holding back booming production growth.

Unconventional shale wells have a very steep decline rate. Because of that three out of every four barrels of oil added in the Bakken and Eagle Ford Shale plays are simply going to replace the declining production of wells drilled over the past few years. This has producers like Kodiak Oil & Gas and Continental Resources drilling more wells just to maintain production rather than to grow it.

The following graphic from the U.S. Energy Information Agency shows the dramatic impact the decline rate will have on the Bakken Shale's production growth rate from June to July of this year.

Same theme, different play
We see the same issue in the Eagle Ford Shale, which is an area that Devon Energy recently made a big splash as it acquired a position in the play. The EIA sees a big decline in legacy production there holding back growth as this next graphic portrays.

This makes it harder for companies like Devon Energy to grow Eagle Ford production as the company needs to first make up the production decline from older wells. As this next slide shows, Devon Energy sees staggering first year decline rates of upward of 90% in some of its Eagle Ford Shale wells. 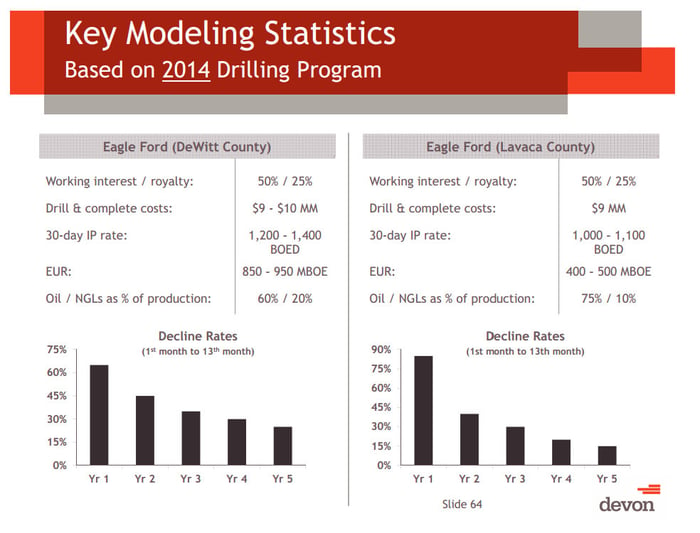 Further, as that slide also notes production from these new wells will continue to steadily decline each year. That forces Devon Energy to drill a good portion of future wells just to maintain production levels each year before it can even drill wells that are additive to production.

Investor takeaway
Steep decline rates from unconventional shale wells really hamper growth. Overall, three out of every four barrels of new oil that Kodiak Oil & Gas, Devon Energy, and Continental Oil produce simply replace the production from previously drilled wells. That being said, these companies are able to overcome the decline rates and still grow production by double digits, which is a pretty healthy clip even if it's not as strong as it would have been if the wells didn't decline so fast.