AbbVie's share price has broken down in recent trading sessions, falling by double-digits for the year. Can the drugmaker's stock rebound before the end of 2015?

AbbVie's (ABBV -1.45%) stock has definitely had an off year. Prior to 2015, AbbVie's shares had appreciated an astounding 83% since the company was spun off from its parent company, Abbott Laboratories, in 2013: 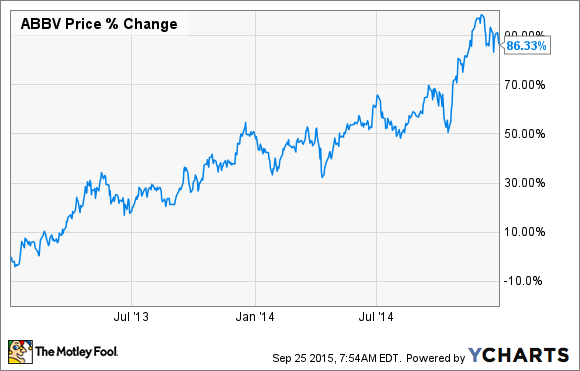 However, this year has been a different story altogether, with the drugmaker's shares falling by double digits, outpacing even the downturn in the broader markets: 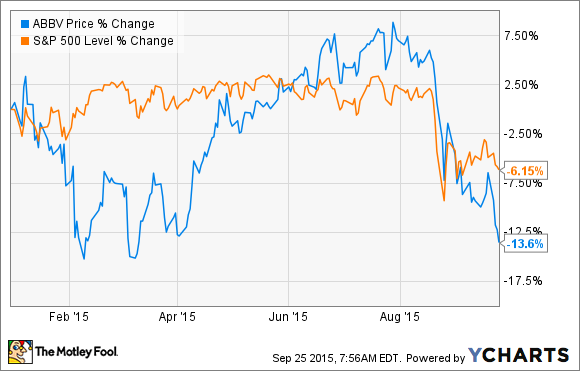 The underlying reason behind AbbVie's rough year is no secret. Put simply, investors are deeply concerned that the upcoming patent expiration for the company's flagship anti-inflammatory drug, Humira, will cause revenues to plummet within the next two years.

After all, Humira does tend to make up over 60% of the drugmaker's quarterly revenues, and several competitors are attempting to bring a biosimilar (generic) version of the drug to market when it loses patent protection in the U.S. at the end of 2016.

The odd part of AbbVie's story, though, is that the average price target among 12 different analysts surveyed by S&P Capital IQ stands a whopping 34% higher than today's price, or $76 a share. Given that the market obviously disagrees with this figure, at least right now, let's consider if AbbVie indeed has what it takes to break out of this recent slump and head higher going into the end of the year.

Brighter days ahead?
Before we peak into AbbVie's future, I think it's important to sum up the drugmaker's 2015. At present, AbbVie is on track to post a 15% increase in product sales and a healthy 28% rise in EPS, year over year.

Those numbers are critical to note at this juncture, because they show that AbbVie's share price isn't lagging because of any major problem with its top or bottom lines. In fact, AbbVie's shares are currently trading at around 4.6 times trailing-12-month revenue -- a figure markedly lower than those of many of its peers.

Taking a look ahead, the bull case for AbbVie definitely picks up steam if we consider the Street's forecast for 2016. Specifically, AbbVie should see yet another 15% rise in annual revenue, and an 18% increase in EPS, relative to 2015's final figures.

The good news is that these double-digit projections do look realistic for a couple of reasons. First, AbbVie recently secured another label expansion for Humira, this time for the treatment of moderate to severe hidradenitis suppurativa. Most importantly, though, the drugmaker has made steady progress advancing its broader clinical pipeline, helping to bring important new drugs and revenue sources, like the intestinal gel Duopa for Parkinson's disease, into the fold.

So, while the concerns over Humira's exclusivity shouldn't be brushed aside, I think investors may want to keep in mind that this isn't an issue that will have any impact whatsoever on the drugmaker in 2016. In other words, the market appears to be hitting the panic button over an issue that is at least a year away from mattering, and perhaps much longer, depending on how long it takes a biosimilar to gain a regulatory approval.

Is AbbVie a buy right now?
Like many investors, I've recently grown somewhat cautious of AbbVie because of the glaring mismatch between its fundamentals and the market's perception of the company's future growth prospects. In short, the market has blatantly ignored the drugmaker's top-notch levels of growth this year, instead letting fear overcome common sense.

As AbbVie's shares are now trading at a forward price to earnings ratio of around 11, though, I do have a hard time believing they will go much lower at this point. Basically, the stock isn't garnering much of a premium to speak of, especially for a company that is leading the pack in terms of industrywide growth.

So, my hunch is that once the storm clouds dissipate over stocks in general, and healthcare stocks in particular, AbbVie is going to be one of the first to rebound. I'm thus cautiously optimistic that AbbVie is nearing an inflection point in terms of its stock price, perhaps making now a good time to pick up some shares.

George Budwell owns shares of AbbVie. The Motley Fool has no position in any of the stocks mentioned. We Fools may not all hold the same opinions, but we all believe that considering a diverse range of insights makes us better investors. The Motley Fool has a disclosure policy.