Afer completing its acquisition of Hospira earlier this month, Pfizer is increasing its full year sales and profit outlook

Pfizer (PFE 0.56%) has updated its full year sales and earnings forecast to include the impact of its recent acquisition of biosimilar drugmaker Hospira. Specifically, Pfizer thinks it will generate at least $46.5 billion in revenue and $2.04 in non-GAAP earnings per share this year. Those projections are above prior guidance for sales and non-GAAP EPS of at least $45 billion and $2.01.

Because Pfizer's purchase of Hospira closed only a few weeks ago, yet the company is already issuing new guidance, Pfizer appears to be quite comfortable with its postacquisition integration plans. If so, then Hospira's future impact on Pfizer could be better than previously thought; especially as Hospira's pipeline of generic biosimilars matures.

Ushering in a new era
The complexity and expense of biologics have insulated them against generic competition for years, but that's quickly changing now that the FDA has established a clear pathway to approval that's already resulted in the launch of the first biosimilar in the United States.

Small molecule drugs, which are made chemically, are much easier to duplicate and mass produce than biologics, which are created in living cells and are impossible to copy identically.

But thanks to advances in technology, biopharma companies are finally producing biologics similar enough to their brand-name counterparts to work as effectively and safely and as a result, these biosimilars are expected to significantly reshape the market for biologics over the coming years.

Because of patent expirations over the coming five years to top-selling biologics, roughly $67 billion in revenue will be up-for-grabs for biosimilars, which will likely be sold at roughly a 30% discount to their branded counterpart.

To capture that opportunity, drugmakers are funneling billions into R&D, but arguably none of these companies has made as big of a commitment this year to the market as Pfizer.

Pfizer's $17 billion acquisition of Hospira leapfrogs it to the front of the pack of drugmakers hoping to tap into the market for biosimilars because Hospira has a long history of developing and marketing biosimilars in Europe, where biosimilars have been available for years.

After buying Hospira, Pfizer's late-stage pipeline of biosimilar drugs in development totals five drugs, all of which have multibillion potential that could give Pfizer a very good shot at capturing a big chunk of what it expects to be a $20 billion market by 2020.

Turning the corner
The acquisition of Hospira comes as Pfizer is finally at a point where it may be able to return back to top- and bottom-line growth.

In 2012, Pfizer lost patent protection on its top-selling drug, Lipitor, which is used to lower cholesterol to reduce the likelihood of cardiovascular disease.

At its peak, Lipitor was racking up sales of more than $12 billion annually. But today, sales of Lipitor are running at an annualized $2 billion clip, and while that's still a solid showing for an off-patent drug, it's still far south of its peak.

Unsurprisingly, Pfizer's inability to launch enough new drugs to make up for the sales decline for Lipitor has led to its revenue and profit steadily declining over the past few years. 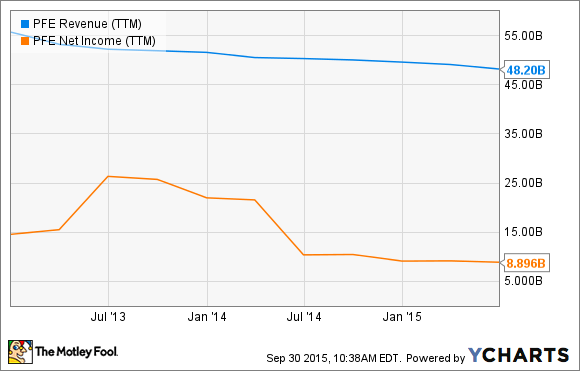 However, that decline appears to be leveling off as Lipitor scripts stabilize and that means that new drugs and financial upside tied to its acquisition of Hospira could mean that Pfizer's darkest days are behind it.

Looking ahead
Industry watchers were already modeling for $2.09 in non-GAAP EPS this year before Pfizer's increased guidance, so it's uncertain if Pfizer's news will lead to analyst's upping their outlook for 2015.

A more likely scenario would be that analysts will bump up their outlook for 2016. Currently, Wall Street is looking for Pfizer to deliver $2.35 in EPS next year, up from $2.33 estimates 90-days ago.

Pfizer shares are already relatively cheap at just 13 times their current forward year earnings per share estimates, but if analysts update their models to expect a greater benefit from the Hospira, then Pfizer's could get even cheaper.

Since Pfizer is paying a 3.5% forward dividend yield and an improving top and bottom line could lead to future dividend increases, the combination of Pfizer's opportunity in biosimilars and attractive valuation make it one of my favorite stocks to buy in big pharma.