What: Shares of Blue Buffalo Pet Products(NASDAQ: BUFF) continued their post-IPO slide last month, falling another 30% according to data from S&P Capital IQ. 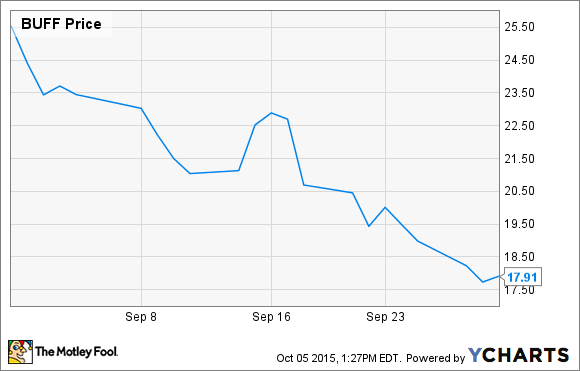 So what: There was little news surrounding Blue Buffalo in September, yet shares continued to pull back last month as the market struggled to agree on a fair price for the stock following its IPO in July. After initially selling its shares for $20, the stock spiked as high as $28 in its first week of trading before entering a downward trend toward the end of August.

Over the course of the month, the stock became a popular target for short sellers. Short interest spiked more than 400% between Aug. 31 and Sept. 15 as a number of other recent IPOs fell during the month, indicating investor anxiety regarding unproven growth stocks during the wider market pullback.

Shares of Blue Buffalo got a bump on Sept. 15 when Wells Fargo upgraded the stock to outperform from market perform. However, those gains quickly disappeared in the market panic following the Fed's decision not to raise interest rates.

Now what: Trading at over 30 times expected 2015 earnings, Blue Buffalo is modestly priced for a recent IPO, and though the company competes in the stagnating pet products industry, it has managed to find steady growth by selling healthier products and should also benefit from a trend of greater spending on pet supplies in the U.S.

Sales grew 16% in its second quarter earnings report, its first as a public company. The company has recently seen sales boom, more than quadrupling between 2010 and 2014, and its operating margin has grown to 20%, an impressive level for a consumer products company. Using brand ambassadors and pet supply stores, Blue Buffalo has helped cultivate growing loyalty to its brand, which is now the largest natural pet products supplier in the country.

After a 40% drop from its recent highs, Blue Buffalo shares now seem correctly priced. If the company can execute on its plan of grabbing more share from the huge pet products market, the stock should be a long-term winner.