Please ensure Javascript is enabled for purposes of website accessibility
Log In Help Join The Motley Fool
Free Article Join Over 1 Million Premium Members And Get More In-Depth Stock Guidance and Research
By Matthew DiLallo - Oct 15, 2015 at 11:21AM

Oil-field service giant is expected to report third-quarter results on Monday, Oct. 19, before the market opens.

The oil market continued to be turbulent during the third quarter with the price of oil down more than 20%. That had a pretty direct impact on the rig count, and therefore oil and gas activity, as producers added but then quickly laid down rigs. 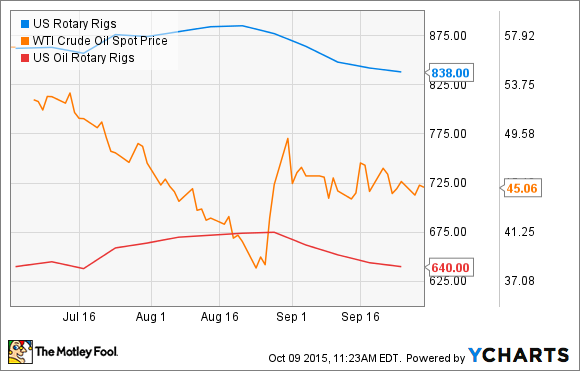 That's not exactly the recipe for a strong quarter for oil-field service companies, but it is the backdrop we find as we consider what's ahead in Halliburton's (HAL 2.82%) third-quarter earnings release on Monday. Knowing that oil and gas activity was likely volatile during the quarter, here are three areas investors will want to monitor this quarter.

First, let's review
Last quarter Halliburton surprised the market with a strong quarter after it beat on both the top and bottom lines. This was despite a staggering 40% drop in the U.S. rig count from just the prior quarter. Halliburton, however, was able to outperform the slumping rig count, which is evident by the fact that revenue in its key North American segment only fell 25% as we see in the chart below.

Overall, Halliburton reported $5.9 billion in revenue, which was just 16% off the prior quarter despite a 26% plunge in the global rig count. Meanwhile, earnings came in at $0.44 per share, which was just a nickel off the prior quarter. The company was able to accomplish this feat by controlling its costs and delivering higher margin technology to its customers, which kept its margins from being compressed as deeply as feared.

In North America, if we extrapolate the current rig count forward, it suggests that the average rig count for the third quarter should decline by at least 5% compared to the prior quarter. This, in combination with a full quarter impact of lower pricing, leads us to believe that revenues and margins in the third quarter will be under pressure. This pattern is consistent with previous cycles where we typically see at least a one-quarter lag when the market is transitioning toward the bottom. Based on our visibility today, we're currently expecting a low single-digit decline in sequential revenues with margins also drifting modestly lower.

What Garcia forecast -- a single-digit sequential decline in the rig count -- is exactly what happened during the quarter. So, it's no surprise to see analysts are expecting a similar sequential decline in Halliburton's revenue. The current consensus estimate is for revenue to drop 4.3% over the last quarter to $5.66 billion. Earnings, on the other hand, are expected to drop much further, falling to just $0.28 per share according to analysts. This is due to the expectation that margins will be under more pressure as a result of lower activity levels and the impact from lower pricing.

Having said that, Halliburton has demonstrated its ability to beat the estimates quite regularity during this downturn. The key to its ability to do that again will be if it managed its costs and drove strong sales of its higher margin technology products. If it did both, it should beat analysts expectations yet again.

2. Progress on the Baker Hughes (BHI) merger
There were a number of reports over the past month regarding the company's pending merger with rival Baker Hughes. A couple of the reports suggested that the company was having a hard time getting regulators to approve the deal in its original structure. This is why the company recently announced that it has proposed additional asset divestitures to ease the fear of regulators that competition would be stifled as a result of the merger.

Given the conflicting reports, investors will want to take a look at the company's update on the progress of the merger. They'll want to look for any major changes to its outlook for the deal. Further, Halliburton will need to alleviate concerns that the original merger rationale and synergies are being affected by the additional divestitures. The company can calm these fears by reiterating its $2 billion merger synergy cost savings target.

3. Its outlook for the fourth quarter and 2016
The final thing investors should keep an eye on is Halliburton's outlook for next quarter and next year. As of the end of the second quarter, the company expected that conditions would remain tough during the near term, but that activity levels could improve at some point in 2016. However, with oil prices remaining volatile in recent weeks, it's possible industry conditions could remain muted. On the other hand, any indications from the company that there are signs that activity levels should improve in 2016, such as its customers expressing optimism that oil and gas budgets won't be cut as deeply as feared, would be a welcomed sign.

Investor takeaway
The foundation of Halliburton's third quarter really comes down to two things: margins and outlook. If its margins aren't compressed as deeply as feared the company should manage to beat expectations yet again. Further, if its outlook remains positive, both for the Baker Hughes merger and industry activity heading into 2016, that would go a long way to soothe investors fears as it suggests that better days lie just ahead.