Back in 2011, it looked like the future was bright for metals and mining stocks and the rising commodity tide lifted all boats, even those of marginal industry participants. But 2011 turned out to be a turning point in the commodity markets, with most natural resources and associated products falling hard since that point. No one has been spared in the downdraft, including some of the best companies in each industry. And that's why now is a good time to look at industry leaders like diversified miner BHP Billiton Limited ADR (NYSE: BHP) and American steel giant Nucor Corporation (NYSE: NUE).

Digging in
BHP Billiton is one of the world's largest miners. Its primary focus is iron ore, copper, metallurgical coal, and oil. It's also laying the foundation for a potash mine in Canada that isn't likely to start producing until after 2020. In fact, it's doubled down on these assets recently, with the spinoff of pretty much everything else it owned in South32. However, what's left are the miner's crown jewels, with higher margins and more growth potential.

A BHP mine being worked. Source: BHP Billiton.

Moreover, BHP is one of the best run miners around. For example, BHP's operating margin has been around the 60% range over the last three years. Rio Tinto, one of its main megaminer competitors, has seen its operating margin sit below 30% over that span.

Simply put, BHP's focus is on owning long-lived, low cost assets. And it's been working hard during this downturn to produce more with less. For example, it increased production of iron ore, oil, and coal in fiscal 2015, with copper production flat because of a planned plant outage. At the same time, the company was able to reduce its costs at key operations, examples include a 31% reduction in cash costs at Western Australia Iron Ore and a 23% cash cost drop at Queensland Coal. That's an impressive showing and proves BHP can and does do more with less.

And while earnings have fallen because of the weak commodity price environment, the company is strong enough to survive the downturn. Moreover, it continues to reward investors with annual dividend increases, with more than a decade of hikes under its belt. If you are a contrarian looking for a mining play, BHP should be on your short list. It is, simply put, one of the best mining stocks around.

The metal maker
The story is pretty similar at Nucor, only Nucor's focus in making steel. Predominantly a U.S. mill, the company has an impressive history of using its financial strength to not only survive the cyclical steel industry's ups and downs, but also to get better while others are suffering.

On the financial strength side, consider these facts. Nucor's debt makes up only around 35% of the capital structure. It has a $1.5 billion line of credit, but it doesn't have any money drawn on it. Its cash balance was around $1.5 billion at the end of the second quarter. And its current ratio was over 3, meaning it could pay its near-term bills three times over with its cash and other easily movable assets like inventories. During the second quarter conference call CEO John J. Ferriola was asked about the potential for steel companies to fold based on the current difficult market, and he replied, "We won't be one of the one[s] that will be closing." Looking at the balance sheet, you can see why he's so confident of that.

If that were all Nucor had to offer it would be pretty interesting. But there's more. It's part of the company's business plan to use downturns to get better. For example, Nucor has spent nearly $6 billion since the steel industry downturn started in 2008 to become a better company. That's included acquisitions and investment in new plant and equipment intended to reduce costs, control access to key supplies, and improve productivity. And while its been spending all of that money, it's lost money only once, in 2009.

Moreover, it also has a long history of rewarding shareholders with dividend hikes. Although the increases have been tiny of late (just a penny a share in each of the last five years) the commitment to hiking the payment goes back over 40 years. So the small increases may not be desirable, but they show that Nucor hasn't forgotten about its shareholders. Once again, if you are a contrarian looking for a great steel company on sale, Nucor should be on your watch list. 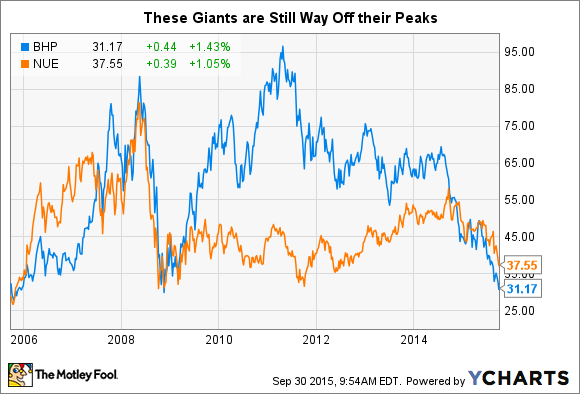 Babies and bath water
When markets go to extremes, even the best companies find their stocks getting hit. BHP and Nucor are both dealing with material headwinds. However, both have the financial strength and assets to not only survive the rough waters but also to get to the other side in stronger shape. That is what makes them some of the best stocks around in metals and mining.