Stocks ended the day slightly lower after spending most of the trading session in the red. The S&P 500 (SNPINDEX: ^GSPC) lost 0.2% today while the Dow Jones Industrial Average (DJINDICES: ^DJI) ended 0.1% lower. 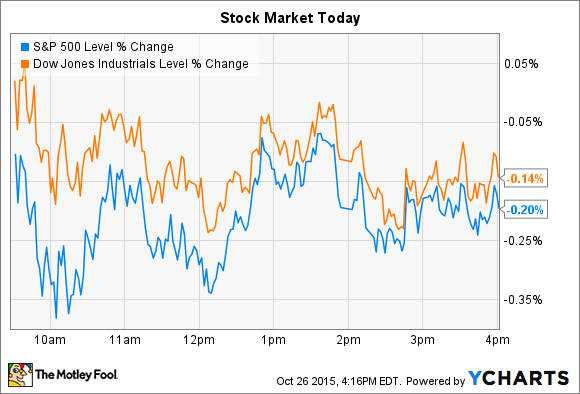 Apple's (NASDAQ: AAPL) stock fell ahead of its critical earnings report due out tomorrow. And Tyson Foods (NYSE: TSN), the nation's largest beef producer, slipped after a new study found a link between cancer and some types of red meat.

Apple was the biggest percentage loser in the Dow today, falling 3% on unusually high volume. The tech giant – and most valuable company on Earth -- is slated to post third-quarter earnings results after the market closes on Tuesday, Oct 27. Wall Street pros are forecasting a 21% revenue pop for consumer electronics maker, pushing sales up to $51.1 billion from last year's $42.1 billion mark.

That result would be a slowdown from last quarter's 33% sales increase. Yet it's more optimistic than Apple's own guidance that in July called for $50 billion of quarterly revenue. Analysts see profit continuing to grow at faster rate than sales, rising 32% to hit $1.88 per share. Apple accounts for a disproportionate chunk of earnings for the market: It was the second biggest contributor to S&P 500 earnings as a whole last quarter .

As usual, iPhone numbers will be critical to Apple's results this quarter. The company last posted a 35% increase in unit sales of the blockbuster product, to 47.5 million devices. But revenue jumped 59% higher as the larger iPhone 6 and iPhone 6 Plus pushed average selling prices dramatically higher. Investors are hoping for more strong growth in both unit sales and total revenue for the iPhone .

Apple's guidance for the holiday quarter might be what really drives the stock reaction tomorrow. It will be going up against tough comps with the prior year's record Q4, which could bring a flat -- or even negative -- iPhone growth forecast from CEO Tim Cook tomorrow. On the other hand, positive remarks about customer reception of the Apple Watch and iPhone 6s and 6s Plus could reinject optimism into a stock that's currently valued at 13 times trailing earnings, down from 17 times earnings earlier this year.

Tyson falls on cancer talk
Tyson Foods' stock slumped 5% after the World Health Organization today published a report that linked certain types of red meat products with increased risk of cancer. The analysis was built on a review of 800 health studies, and found that processed red meats like bacon and salami are "carcinogenic," meaning that steady consumption of them carries an elevated risk for developing cancer – akin to keeping a long-term smoking habit. Other types of red meat, like steaks and roasts, aren't as dangerous, according to the report .

Tyson is the largest beef producer in the United States, with the capacity to process 175,000 cattle per week. It booked $16 billion of beef sales last year and managed a small but significant 2.1% profit margin on the revenue. Because of that dominant market position, Tyson stands to lose the most if consumers cut back sharply on their red meat consumption. In fact, management warns investors in the 10-K that its results could be hurt by "negative perceptions concerning the health implications" of its products. Tyson highlights the risk of "negative publicity about our products (whether or not valid)," and today's report likely qualifies as just this kind of publicity. Yet many such reports have been published over the years, and that didn't stop the company from logging 12% higher beef sales last year .

Tyson is set to post third-quarter on Nov. 16, and Wall Street expects flat results, with profit even against the prior year and sales up by less than 2%.