When Apple (NASDAQ:AAPL) reports second-quarter results on Tuesday, investors will hone in on revenue, earnings per share, and iPhone numbers, as per usual. But the tech giant's guidance for its current quarter, which wraps up at year-end, will get extra attention. Here's why.

In fact, it's pretty much impossible to overstate just how big of a quarter Apple's first fiscal quarter of 2016 (which is the fourth calendar quarter of 2014) was. The company reported 48% year-over-year growth in EPS during the quarter, driven by big increases in iPhone sales and a well-executed and ambitious share repurchase program. 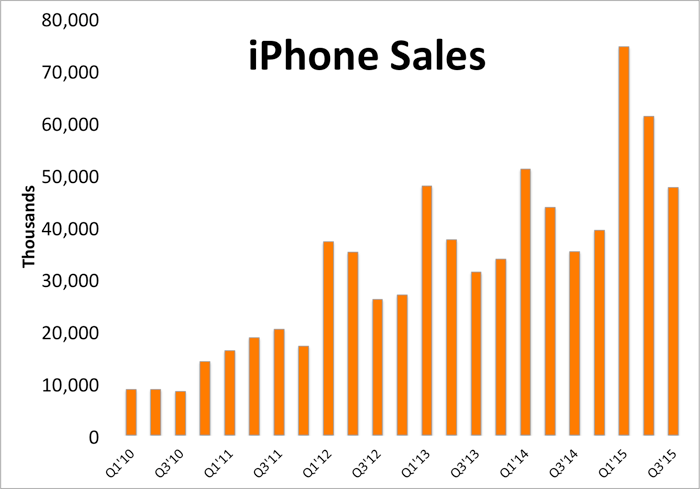 iPhone unit sales for the quarter soared 46% from the year-ago quarter, riding on the success of the company's first foray into phablet territory. With Q1 2015 marking the first full quarter of iPhone 6 and 6 Plus availability, the new model absolutely stole the show.

And even more impressive than the year-over-year growth in iPhone unit sales was the 57% year-over-year increase in iPhone revenue. This outsized growth of iPhone revenue in relation to iPhone unit sales was driven by a higher average selling price for the smartphones as the company flexed its pricing power with more expensive versions of the iPhone when it launched new models last year.

Apple raked in a record $74.6 billion in revenue during the quarter -- its biggest quarter ever by a long shot. Indeed, the fiscal first quarter of 2015 remains its biggest to date by a margin of more than $16 billion over any other quarter.

Measuring up against this strong year-ago period in the first fiscal quarter of 2016 won't be easy.

Checking in on guidance
With a comp like this, there's a chance that Apple could guide for flat year-over-year revenue growth -- or even a decline -- when it provides quarterly guidance on Tuesday. This would mark a major shift in the storyline of Apple's revenue growth rates in recent quarters. In its third fiscal quarter of 2015, it posted 33% year-over-year revenue growth. And it guided for about $50 billion in revenue for its fourth fiscal quarter of 2015, a figure that would represent an 18.8% increase from the year-ago period. Going from rates like these to flat growth or even a decline could spark concern among investors.

Furthermore, guidance will be important this quarter for reasons beyond the fact that it will likely represent a new phase of more difficult year-over-year comps; it could also provide insight into the health of Apple's new products -- particularly the iPhone 6s and 6s Plus and the Apple Watch. iPhones are largely represented in the company's guidance, given that the product segment currently makes up an impressive 63% of revenue. In addition, since Apple Watch wasn't for sale in the year-ago quarter but is during this holiday quarter, investors will be hoping the new product line will be meaningfully accretive to the top and bottom lines; if Apple guides for a year-over-year increase in Apple's holiday quarter revenue, it could be due to high expectations from management for Apple Watch.

By checking in on Apple's outlook for next quarter, investors will get an idea of how bullish managment is on both its current product suite and its ability to produce and deliver these products during the quarter. Management will likely provide some insight into the reasoning behind its guidance for the first fiscal quarter of 2016 in the earnings call following its fourth-quarter earnings release on Tuesday.