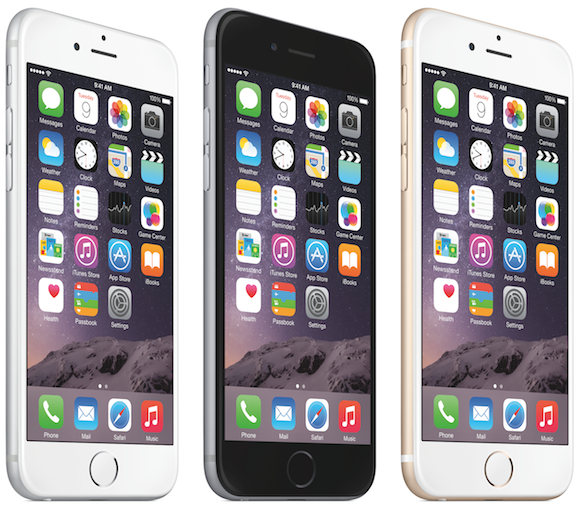 After last quarter's blowout earnings release, Apple (AAPL 2.21%) is following up with yet another blowout. And then some.

But this time around, the Mac maker completely crushed all expectations by a significant margin. The Street would have been satisfied with $67.5 billion and $2.61 in earnings per share, which would have been higher than Apple's own guidance. iPhone unit sales were expected anywhere from 67 million to 70 million.

Instead, Apple brought in nearly $75 billion in sales, posted $3.06 in earnings per share, and shipped 74.5 million iPhones. Net income was an astonishing $18 billion, and earnings per share grew 48%. Apple is now a hair shy of $200 billion in trailing 12-month revenue, which is a stunning accomplishment in itself. Additionally, Apple shipped its 1 billionth iOS device in November.

The iPhone 6 and 6 Plus crushed it
Investors already knew that the iPhone 6 and 6 Plus were important catalysts as Apple entered the growing phablet market. The growing consumer preference of larger phones wasn't going away anytime soon, so moving upmarket was absolutely the right call. Large phones had historically been a differentiator for Android OEMs, but Apple has now closed that gap. This year's iPhone launch saw a higher rate of Android switchers than any of the last three launches.

Tim Cook noted that the preference for larger phones varies by geography. While Cook didn't mention China specifically here, big phones have been soaring in popularity in the Middle Kingdom, and this was naturally a key factor for the iPhone 6 and 6 Plus considering the fact that China is Apple's second largest iPhone market behind the U.S.

Just look at Greater China revenue, while keeping in mind that the new iPhones didn't go on sale until late October, so they weren't available for the full quarter. On top of that, the Chinese New Year and associated holiday shopping season are coming up next month. 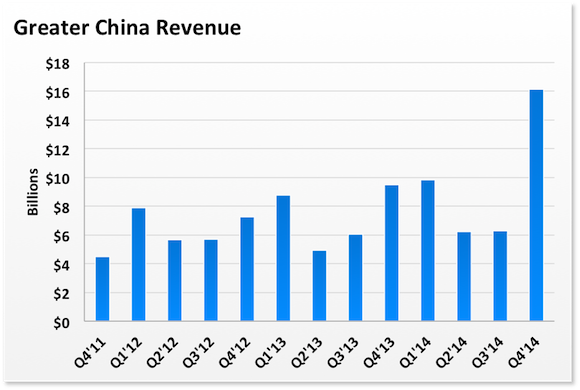 As if investors needed even more evidence that going big was smart, iPhone average selling prices put up a major boost. In fact, iPhone ASP has quite literally never been this high, coming in at $687 last quarter -- a new all-time record. This is predominantly a function of the iPhone 6 Plus, which sports a $100 premium alongside the new pricing structure for storage configurations that strongly encourage upsells.

iPad recovers and Mac soars
The iPad also has been experiencing a speed bump for the past few quarters. Unit sales did bounce back nicely sequentially following the product cycle refresh and holiday shopping season. Apple sold 21.4 million iPads last quarter, which was down 18% year over year. iPad ASP continues to fall, to a new low of $419.

Meanwhile, the Mac continues to maintain its broader momentum in the global PC market, slowly increasing its market share. Mac units were up 14%, to 5.5 billion, while the PC market contracted by 3% during the quarter.

Analysts framed this as a one-to-two month "delay," but that would only be relative to rumors that Apple was hoping to ship Apple Watch by Valentine's Day. Cook said that Apple Watch's development is proceeding "right on schedule." Developer interest is already on the rise following the release of the Apple Watch SDK in November.

Apple repurchased $5 billion in shares last quarter, leaving just more than $17 billion left of its $90 billion authorization. Apple has conducted three separate accelerated share repurchase programs since 2013, each time bringing its repurchases for those respective quarters to around $17 billion, on average. It's conceivable that Apple will do another one. 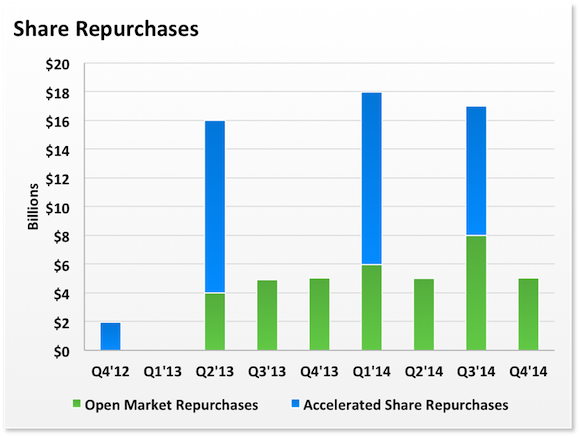 While the current authorization is expected to conclude at the end of 2015, Apple did confirm it would provide an update in April during its next earnings release.

You can't say that Apple didn't warn you
In fact, as strong as the results were, they would have been even stronger if it weren't for pesky foreign exchange headwinds -- the same ones that CFO Luca Maestri warned investors about in October.

The U.S. dollar's continued strength is hurting Apple's business abroad, including important markets like Japan and Europe. On a constant currency basis, revenue growth would have been 4% higher, and gross margin would have been 150 basis points higher. Yet Apple still managed to post an impressive gross margin of 39.9%, well above its guidance.

The foreign exchange challenges aren't going anywhere anytime soon; but even after factoring in these hurdles, Apple's guidance for the current quarter is quite bullish. The company expects revenue to come in between $52 billion and $55 billion. Cook believes that current iPhone 6 demand is sustainable because only a fraction (in the "mid-teens") of the installed base has upgraded.

Let's just say, the iPhone 6 and 6 Plus are only getting started.