Apple Watch isn't the only catalyst investors should be watching. Image source: Apple

Even without a firm timeline, we do know that the company is planning on launching Apple Watch in "early 2015," so we're still talking about mere months before the device hits the market. Analysts are already bullish on the device and have begun factoring unit estimates into their models.

I've argued that the Apple Watch opportunity is asymmetrical, since a potential failure would likely carry more weight than a possible success in terms of investor confidence. But there's another catalyst also on the horizon for early 2015, and it could be even more important than Apple's first wearable device.

Returning even more capital to shareholders
Beyond product plans, Apple has taken to providing updates to its capital return program near the beginning of each calendar year, typically in March or April. Less than seven months after Tim Cook became CEO, Apple announced its plans in March 2012 to bring back its dividend alongside a share repurchase program. Next, Apple more than doubled its capital return program in April 2013, expanding it further in April 2014.

For the last two years, the updates have come alongside Apple's fiscal second quarter earnings releases, and Cook has set expectations for this trend to continue going forward. Apple solicits input from major shareholders, and takes these suggestions into consideration.

Apple currently pays a respectable quarterly dividend of $0.47, which translates into a 1.6% yield right now, but I believe that Apple's commitment to aggressive share repurchases has done more to drive share gains and fortify upward momentum than its dividend.

At the rate that Apple is going, it will need to increase its share repurchase authorization yet again within a matter of months if it wants to stand by its commitment to keep giving money back to shareholders. That's the catalyst that investors should be watching.

Right on schedule
At last count, Apple had repurchased a cumulative total of almost $68 billion, leaving just $22 billion of its current $90 billion authorization. Over the past six quarters, Apple has repurchased $11 billion on average (including the occasional accelerated share repurchase program).

If that trend were to hold true, that would actually put Apple exactly on schedule to exhaust its authorization by the end of the first quarter -- precisely when it typically updates its capital return program. A picture is worth a thousand words. 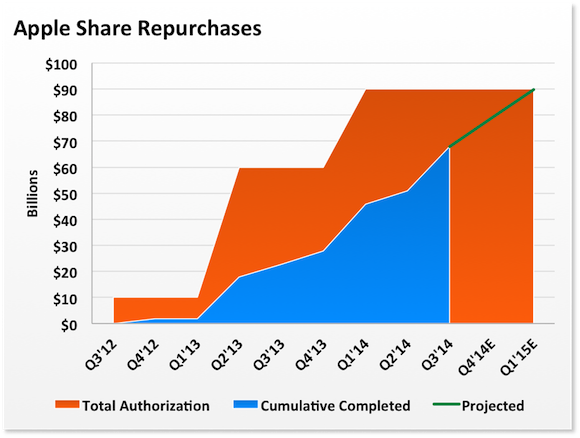 There should be little doubt that Apple will indeed boost its share repurchase authorization. Not only has management committed to ongoing capital returns, Apple generates so much in operating cash flow that even after giving so much back, it still has more net cash than when it started the program ($9.2 billion more to be precise).

How high can Apple go?
That brings us to the next inevitable question: How much will Apple increase its share repurchase authorization? Once upon a time, Carl Icahn pushed for Apple to implement a massive $150 billion repurchase program.

The current share repurchase program is supposed to be completed by the end of calendar 2015. Considering the aforementioned historical average of $11 billion per quarter, Apple would then need to increase its authorization by at least $33 billion.

Of course, the company will probably implement an entirely new authorization program after the current one, which has been modified several times, completes. Longer term, Apple could likely sustain $40 billion to $50 billion in annual share repurchases. Apple has generated over $50 billion in operating cash flow in each of the past three years.

Apple needs more (domestic) cash
This also means that Apple will need to issue more debt to continue funding the capital return program, as its domestic cash flow is not sufficient. The company's domestic cash position has continued to dwindle as it plunges those dollars into share repurchases.

Apple issued an additional $12 billion in bonds in April, but has already blown through all of that money. The company's domestic cash is now right back to where it was just before the offering, around $18 billion. 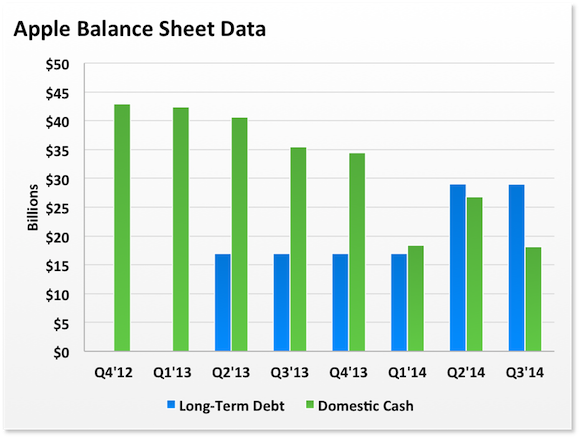 Another accelerated share repurchase program, this time for $9 billion, on top of $8 billion in open market repurchases will do that.

Forget Apple Watch, This Is the Apple Inc. Catalyst You Should Watch In 2015 @themotleyfool #stocks $AAPL Next Article
Current