Please ensure Javascript is enabled for purposes of website accessibility
Free Article Join Over 1 Million Premium Members And Get More In-Depth Stock Guidance and Research
By Evan Niu, CFA - Jul 28, 2014 at 11:40AM

Apple has been trying its best to get rid of cash by returning it to shareholders. The problem is that the Mac maker generates way too much of it. Fortunately, that's a good problem to have.

Yet, Apple can't seem to give its cash to shareholders fast enough.

A trip down memory lane
Back in 2012, Apple announced the initiation of a dividend alongside a relatively modest $10 billion share repurchase program. Dividend payouts started in Q4 2012, and share repurchases commenced the very next quarter. Here's a timeline of how the capital return program has changed in the past couple of years.

The capital return program has now nearly tripled over the course of 2 years. That's what I call aggressive. At $130 billion, Apple's program is larger than many mega cap stocks. Theoretically, you'd think that such a massive program would help Apple reduce its overall cash position as it works to give as much of that back as possible. After all, that was sort of the idea in the first place.

Making money faster than you can spend it
Apple simply generates cash faster than it can give it back. Back when the capital return program kicked off in Q4 2012, Apple had a total of $121.3 billion in cash. After factoring in the two separate bond offerings over the past two years, Apple's current net cash position is $141.2 billion. 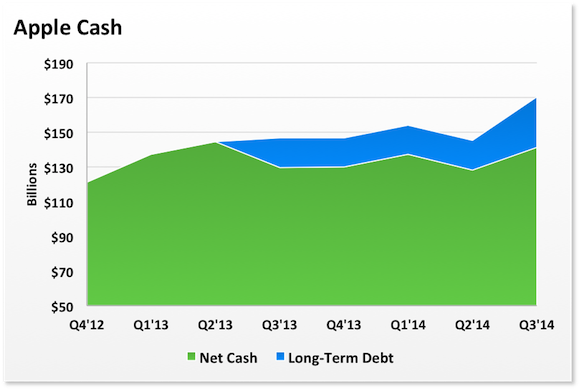 In the chart above, if you add long-term debt to net cash, you get Apple's gross cash position of nearly $165 billion. Apple's net cash position is what's important here though, since Apple's use of debt is merely a way to avoid repatriation. Net cash has still increased by nearly $20 billion since the program started.

Apple has now completed $74 billion of its $130 billion capital return program. Of that total, approximately $51 billion has been allocated to share repurchases with the remaining $23 billion going toward dividends. The thing is that Apple has generated $109.3 billion in operating cash flow over that same time period. Even Apple's enormous capital return program isn't able to keep its net cash position from rising over time. This raises an inevitable question: should Apple be even more aggressive with returning cash?

Moving parts
Last year, activist investor Carl Icahn was pushing Apple to boost its buyback program to $150 billion. Icahn was "extremely pleased" with the company's latest increase to $90 billion. As Apple approaches its current authorization, another increase wouldn't be out of question.

Easier said than done
There are a couple limitations worth noting. Not all of Apple's cash flow is domestic, and its capital return program must be funded with domestic cash. The Mac maker's domestic coffers currently stand at $26.8 billion. That's after selling $12 billion in bonds because it needed more domestic cash. Apple also has other operational needs for cash, such as the $18.5 billion in capital expenditures over that same time period.

Despite its best efforts, it looks like nothing can stop Apple's net cash from continuing to gradually rise.