Please ensure Javascript is enabled for purposes of website accessibility
Log In Help Join The Motley Fool
Free Article Join Over 1 Million Premium Members And Get More In-Depth Stock Guidance and Research
By Evan Niu, CFA – Feb 13, 2014 at 10:00AM

If you thought Apple has more money than it could possibly need, you'd only be half right. The Mac maker needs to pad its domestic coffers every once in a while.

"Opportunistic." That's how Apple (AAPL -2.12%) CEO Tim Cook characterized the decision to repurchase $14 billion in stock over the past couple weeks in an interview with The Wall Street Journal a week ago. I couldn't have put it better myself:

If you look at last year, [Apple] bought back $23 billion. But at a certain point in there [it] did a $12 billion accelerated share repurchase program, which is one of those things where you hook up with an investment bank and basically buy back a ton of stock as a one-time deal. And then the bank covers it and helps facilitate the transaction.

The point is that Apple saw that the price was low, and that was [the company] being opportunistic with this giant accelerated repurchase program.

I think that [it] could go out and do another one of these repurchase programs if [it] wanted to.

Chances are that you think Apple has more cash than it could possibly need. In a way, you'd be absolutely right. In another way, you'd be dead wrong.

Domestic cash is king
Since Apple can only use its domestic cash for dividends and share repurchases, its stateside coffers might actually be relatively light right about now compared to its historical horde over the past couple of years. At the end of 2013, Apple's domestic cash position was $34.4 billion. The $14 billion that Apple just repurchased will take a notable chunk out of that total.

The Mac maker's domestic operating cash flow will certainly help cover the bill, but that figure is hard to quantify. Investors can look at total domestic cash flow to get an approximation. In the six quarters prior to initiating its capital return program in 2012, Apple was adding an average of $3 billion per quarter to its domestic stash.

For the past several quarters, Apple's domestic cash has been on the decline, in large part due to its aggressive share repurchase activity and dividend payouts, which totaled $7.8 billion last quarter.

History repeats itself
Last year, Apple repurchased a hefty $16 billion of its own stock in a single quarter. Of that total, $12 billion was done through an accelerated share repurchase program, with the remaining $4 billion bought in the open market. This was back when shares were trading below $450, which Apple believed was too cheap.

Much like last summer, Apple just conducted another accelerated share repurchase program to buy back $12 billion in stock, in addition to $2 billion in open market purchases. 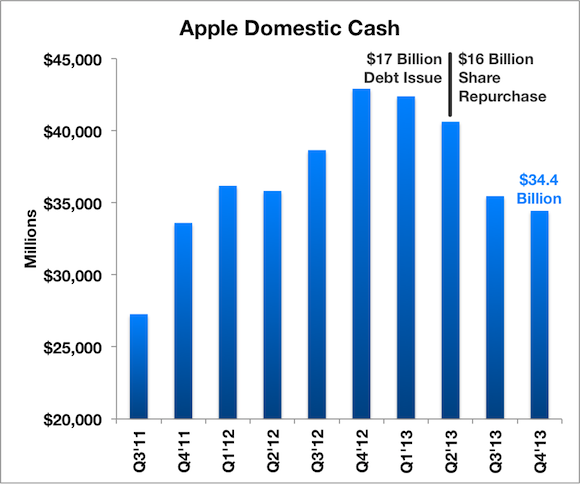 When Apple conducted its accelerated share repurchase program last year, its domestic cash position only declined sequentially by less than $2 billion. How did Apple buy back $16 billion in stock but see such a relatively minor drop in cash? Debt.

Borrowing bills
In order to fund its repurchase program, Apple issued $17 billion in bonds last year as a cost-efficient way to tap foreign cash reserves without tapping foreign cash reserves. As hard as it is to estimate Apple's domestic operating cash flow, it's even harder to figure out how much Apple actually needs to run its U.S. business.

Still, Apple just undoubtedly spent a sizable portion of its domestic cash and it still has $18 billion left on its current share repurchase authorization. Investors won't know for sure how much domestic cash Apple has until next quarter.

Looking farther out, Tim Cook has expressed his commitment to ongoing share repurchases in the long term. Investors should not only expect Apple to boost its repurchase authorization as it approaches the current limit, but also that Apple will inevitably need to issue more debt in order to fund said buybacks. It's just a matter of when.