The famed activist investor has written another open letter to Apple CEO Tim Cook, outlining a case for even more share repurchases. 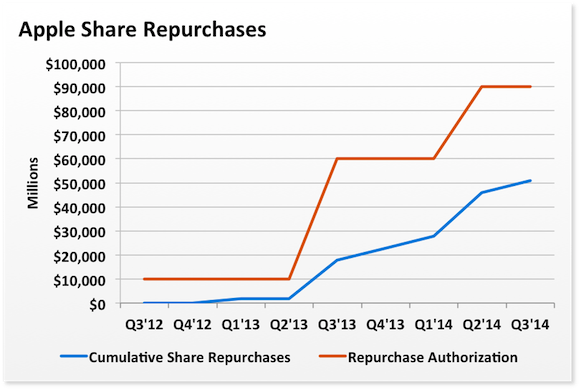 As promised, Carl Icahn has penned another open letter to Apple (AAPL 1.25%) CEO Tim Cook. The activist investor has been one of the most vocal proponents of having the company increase its share repurchase program, and Apple has taken his input (along with that of other major shareholders) to heart.

He's at it again.

"Apple shares at half price"
While Apple's repurchase authorization increase earlier this year wasn't quite the $150 billion that Icahn suggested in 2013, the boost to $90 billion was still impressive. That's especially true since Apple remains committed to its capital return program, and will likely boost it yet again once it approaches the limit.

Icahn argued that the current share price reflects "a massive undervaluation" when considering the strength of the business, the copious amounts of cash on the balance sheet, and Apple's discount to the S&P 500.

Additionally, Icahn went so far as to assign a $203 per share valuation based on Apple's current fundamentals. This estimate is derived by applying a market multiple of 19 times to Icahn's fiscal 2015 estimates. The activist investor said current market conditions are offering the shares at "half price" (just over $101 in Friday afternoon trading). What Icahn doesn't know is that The Motley Fool already offered a 50% off coupon on Apple shares to prospective investors in our S-1 registration statement over two years ago. 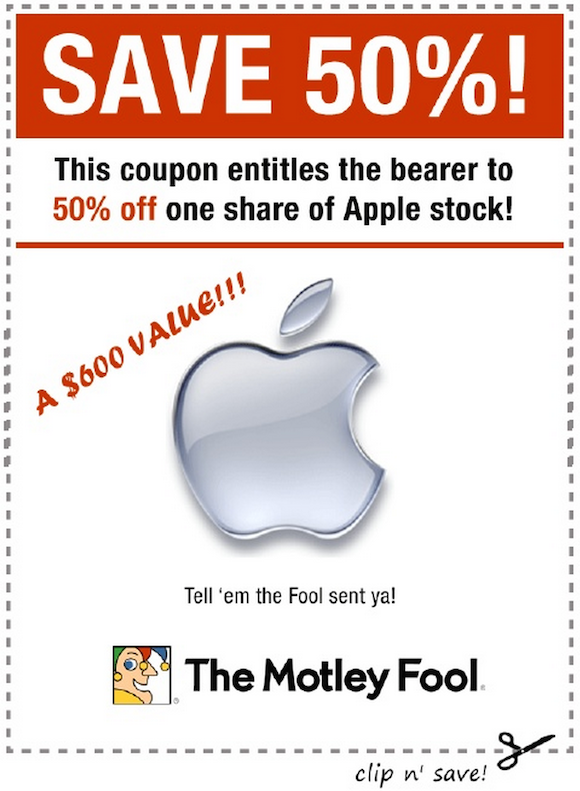 Source: Motley Fool S-1 Registration Statement. $600 value based on pre-split prices. Coupon not valid for anything or redeemable anywhere.

Combining this Foolish coupon with Icahn's valuation estimate, investors are looking at a 75% discount at current prices.

Icahn's tender embrace
Specifically, Icahn suggested that Apple implement a tender offer as a means to repurchasing a large quantity of shares in a fairly short period of time.

As a quick refresher, tender offers are typically conducted at premiums to current prices, but the prices are specified in the offer and as such aren't subject to immediate market fluctuations. Shareholders can then opt to sell their shares back to the company at the specified price, or not. Tender offers can also be prorated if investor interest is oversubscribed relative to what the company seeks to repurchase.

Icahn would not take advantage of the tender offer himself, as his team has no interest in selling in the near term, even at a premium. Rather, a tender offer is but one means to an end. He noted that the "exact method and the exact size" of any repurchase is not the primary concern. Icahn just wants Apple's board to buy back a ton of stock and deliver significant earnings accretion to remaining shareholders.

Much like David Einhorn's "iPrefs" idea, a tender offer might be unnecessary. Apple likes to keep things simple, and its current use of accelerated share repurchase programs gets the job done just fine, even if the final price the company pays through these programs is subject to market fluctuations.

A numbers game
Included in the letter are rather generic descriptions of all the parts of Apple's business, as well as a detailed model forecasting Apple's results through fiscal 2017. Here at the Fool, we tend to poke fun at models of this nature.

Perhaps the most peculiar aspect of this model is the incorporation of an UltraHD Apple TV set, which may or may ever actually happen. Icahn predicted that Apple can sell 12 million units in fiscal 2016 and 25 million in fiscal 2017, at a $1,500 average selling price. Icahn assumes its gross margin profile will resemble the corporate average.

While Icahn acknowledged that Apple "may never" launch such a product, it still seems odd to bake the presumed device into the model. Especially since his team says excluding a TV set would not have a significant impact on the model's earnings estimates and current use of a market multiple for valuing shares. How could a possible product that is expected to generate $37.5 billion in revenue in 2017 (11% of Apple's total estimated revenue) not significantly impact investor confidence?

The assumption that Apple will repurchase $25 billion in stock per year is conservative, but the earnings-per-share growth rates that Icahn is forecasting (44%, 30%, and 30% for the next three years, respectively) seem rather aggressive, particularly given the sheer size of Apple's business. Growing the bottom line to $87 billion, which is bigger than Microsoft's current top line, is much easier said than done.

There's more where that came from
The overarching theme is still that Apple should continue its aggressive repurchase program. The company's pace has slowed as its shares recovered and are now back to hitting all-time highs, but the fact still stands that Apple can't seem to give away its cash fast enough. Even after repurchasing nearly $51 billion to date, Apple still has more cash than when it started.

Apple has begun giving annual updates to its capital return program, typically in March or April, so investors can expect then to learn more about what's in store. Until then, Cook and Apple's board will presuambly consider Icahn's input, along with other large shareholders, when putting together next year's plan.

At least Apple still has nearly $40 billion of its existing repurchase authorization to fulfill in the meantime.