MGM Resorts (NYSE:MGM) has announced that it will form a REIT called MGM Growth Properties LLC to own 10 of its casinos real estate. The portfolio will have 24,000 hotel rooms, 2.3 million square feet of convention and meeting space, and take on about $4 billion of debt.

This continues a trend of gaming companies pursuing REITs, started by Penn National's (NASDAQ:PENN) spinoff or the REIT Gaming and Leisure Properties (NASDAQ:GLPI) in 2013. MGM has fought the REIT until now, acquiescing to demands from shareholders looking to extract more value from the company.

On the surface, a REIT makes some sense for MGM, but long-term is this really the best move for the gaming giant?

Taxes aren't MGM Resorts' problem
What's a little strange about the move to offer a REIT is that taxes aren't exactly a big line item for MGM Resorts -- at least not in the U.S. Below is the line item for federal, state, and foreign income taxes paid, net of refunds for the past three years. For a company worth $13.4 billion that's chump change.

MGM does have a lot of money in deferred taxes, which it would pay if it brought Macau profits home to the U.S., but those aren't affected by the REIT move at all.

Why a REIT makes sense
The theory is that a REIT brings in a new class of investor to MGM that may otherwise stay out of the stock. REIT investors are looking for stable long-term cash flows and are willing to take a low rate of return to get it. That contrasts to the high rate of return gaming investors expect, both in debt and equity markets.

If there's one advantage to spinning off a REIT it's this new class of investors and the ability to reduce debt by about $4 billion. But MGM will also be locked into a lease with a third party company, which may become complicated years from now.

What about flexibility long-term?
The biggest question MGM faces owning a REIT surrounds how it will handle capital expenditures. The regular $50 million upgrade to a resort may not be a big deal to work out, but what happens when it comes time to blow up Excalibur and build the next Las Vegas megaresort? What's good for MGM may not be good for MGM's REIT, making for some complicated board room discussions.

When a gaming company spins off a REIT it's also giving up its largest tangible asset, which has long been used as a borrowing tool for gaming companies. What's left is a company leveraged to gaming operations with little tangible value for new debtholders to fall back on. This could prove to move the risk in gaming stocks even higher.

As you can see below, the Penn National/Gaming and Leisure Properties split hasn't exactly been a hit as a whole. There's no guarantee the REIT will add value for both type of investor. 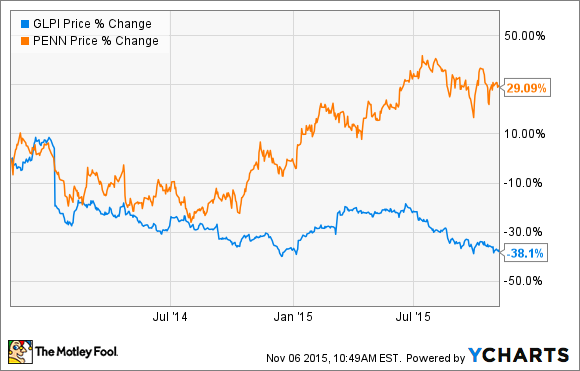 Complex may not be good in gaming
MGM is giving in to pressure to create a REIT, but investors should notice that it didn't include its best assets, Bellagio and MGM Grand, in the deal. That's somewhat telling that the company didn't want to embrace the REIT model wholeheartedly. It also doesn't have a particularly high tax bill that makes a REIT a necessary reform.

Long-term, I think this new structure is only going to complicate the company's business and create strain when it wants to invest in new resorts. That conflict may not arise for years, but it'll come eventually. And then MGM Resorts may wish it had stayed a single company that can do what it wants without negotiating with this new third party, which owns its buildings.