At some point, oil has to bounce, right? That's the question investors in Dover Corporation (NYSE:DOV) must be asking themselves. Dover may be classified as a diversified industrial company, but in 2014, it generated around 35% of its earnings from the oil and gas industry. Given the slump in energy capital spending this year, it's hardly surprising that Dover's full-year revenue and earnings are expected to slump in 2015. However, the stock is also 19% cheaper than it was a year ago. So, is now the time to be picking up shares of Dover? Here's what you need to know before buying. 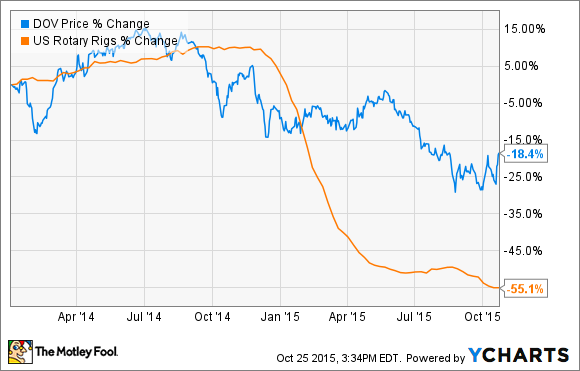 The case for and against Dover

And now the bear points:

It's not just about oil
Eighteen months ago, it all looked so different for Dover. The company had spun off its communication technology segment as Knowles Corporation (NYSE:KN) , which removed the vagaries of the mobile handset market from the concerns of Dover investors. If you want to try to predict which handsets will be hot, and how many microphones they will use, then Knowles could be the stock for you.

A sign of the inherent volatility in a business like Knowles was displayed recently when the stock fell nearly 19% after its third-quarter results. Analysts were left speculating on risks relating to handset launch delays, as the company's guidance came in lower than expected.

Post-Knowles, Dover offered a different proposition. Its management was free to focus on the remaining segments. The plan was to expand internationally in energy and fluids, while launching new products within refrigeration and food, and selling into new industry verticals with printing and ID within its engineered systems segment.

Unfortunately, it didn't all go to plan. Investors need no reminders here about the weakness in energy capital spending in 2015 -- suffice it to say that the steep decline in the U.S. rotary rig count depicted in the chart above illustrates the tale clearly. Dover CEO Bob Livingston has said he believes that rig count is the best leading indicator for its energy segment.

However, Dover's difficulties haven't arisen solely from weaker oil prices. As you can see in the chart below, only the fluids segment has consistently posted earnings increases in the last two quarters. 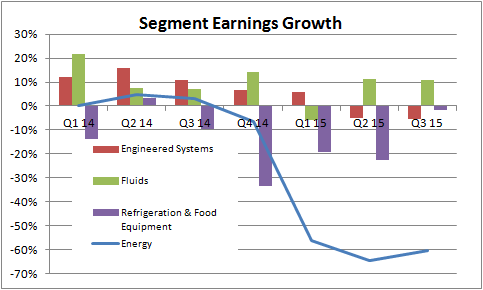 Dover Corporation bookings
In addition, as the chart below demonstrates, bookings growth has been weak across all four segments in 2015. 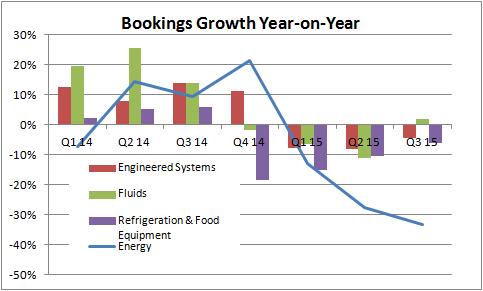 To understand the importance of bookings as a leading indicator, here is a chart demonstrating how bookings tend to lead future revenue. 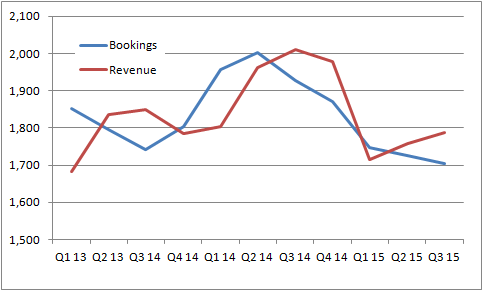 Another source of concern is the company's recent guidance regarding its strongest segment this year (in terms of earnings growth and bookings): fluids. The segment was responsible for 24% of the last four quarters' income, but in the recent third-quarter earnings call, CFO Brad Cerepak announced a downward revision to its full-year organic revenue forecast for the segment. "Fluids' growth rate has been reduced 3 points to 2% to 3%, driven principally by weak oil and gas markets," he said.

As Brad said in his script or in his prepared comments, the down guide on fluids is principally oil and gas, but it's not all oil and gas. We are seeing some softness in Europe and China in fluids as well. We'll see how the fourth quarter shakes up. The third quarter concerned me a little bit in China.

The takeaway
There is no doubt that Dover gives the appearance of being a good value right now, but it would be a mistake to assume that the weakness this year is just about energy -- Dover is also being hit by the uncertain outlook in emerging markets like China. Furthermore, the bookings data -- energy and non-energy -- suggests a possible deterioration in the near term. It's not a stock I would buy right now.

On a brighter note, the company remains highly cash-generative, and if you strongly believe that oil prices will rise in the future, then Dover is worth a close look. Just don't be surprised if it gets worse before it gets better.