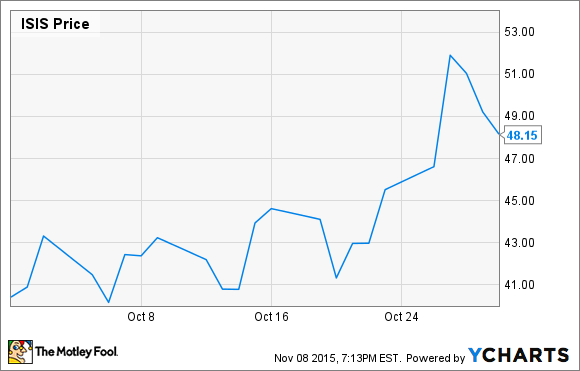 Shares of Isis Pharmaceuticals (NASDAQ:IONS), a drug developer focused on a variety of indications using its proprietary antisense drug development platform, exploded higher by 19% in October, based on data from S&P Capital IQ, after the company announced a number of pipeline advancements.

First up was the announcement that it had initiated phase 1 studies of ISIS-GSK4-Lrx, a therapy targeted at an undisclosed ocular disease. This experimental ophthalmic drug is being developed in collaboration with GlaxoSmithKline, and the initiation of phase 1 clinical studies triggered a $5 million development milestone payment. Isis Pharmaceuticals relies on these milestone payments to help fuel its research and keep the lights on.

In mid-October Isis announced that it had initiated its open-label extension study known as SHINE for ISIS-SMNrx for infants and children with spinal muscular atrophy who participated in the phase 3 ENDEAR and CHERISH studies (and who are eligible to participate in SHINE). Biogen is Isis Pharmaceuticals' partner in developing ISIS-SMNrx, and the initiation of SHINE triggered an $11 million milestone payment.

Then, on the final trading day of October, Isis Pharmaceuticals announced that it had initiated a phase 2 study of ISIS-FXIrx in patients with end-stage renal disease. This therapy is partnered with Bayer and is designed to prevent blood clots. Upon completion of this study, and assuming it advances to phase 3 trials, Isis Pharmaceuticals can earn a $55 million development milestone payment.

The question we should be asking here is whether or not the good times can continue for Isis Pharmaceuticals.

In one corner, investors have to come to terms with the fact that Isis Pharmaceuticals is still a work in progress. The company is running so many ongoing studies that its expenses could keep it from turning a profit for years to come. Although investors tend to be more forgiving of losses from drug developers than in other industries, ongoing losses could nonetheless weigh on the company's share price.

On the other hand, Isis Pharmaceuticals has one of the most diversified pipelines around. With close to three dozen ongoing studies and around a dozen collaborative partners, Isis has its fingers in just about every fast-growing indication. Having such a large development portfolio affords Isis the ability to fail and take chances without paying a huge price. On the flipside, it'll only take a couple of home runs within Isis' portfolio to justify its current valuation.

In my opinion, Isis Pharmaceuticals does have all the tools necessary to head higher, but investors need to understand that this is a story that's going to take years to develop. If you remain patient, I suspect you'll be rewarded.