Shares of department store giant Macy's (NYSE:M) had already fallen 35% from their all-time high before the company reported earnings last week. But while investors were expecting another weak earnings report, the situation at Macy's has deteriorated even more than analysts (or Macy's management) had expected. This precipitated another double-digit plunge for Macy's stock. 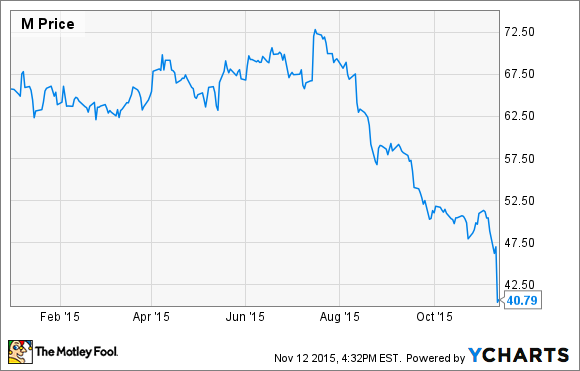 In conjunction with the earnings report, Macy's noted that it spent $1.84 billion to repurchase 30.6 million shares in the first nine months of the fiscal year. This elicited howls of disapproval from some pundits, who noted that Macy's had paid an average price of more than $60 per share for its buybacks, while the stock price had just fallen to around $40.

With 20/20 hindsight, it's easy to criticize Macy's management for "losing" billions of dollars on bad market timing. However, the point of share buybacks isn't just to time the market. The broader purpose is to create value for shareholders by steadily reducing the share count over time. From that perspective, it's too early to call Macy's share buybacks a disaster.

Buybacks gone bad?
Macy's has made share repurchases a core part of its capital deployment strategy since 2011. The table below shows the amount it has spent in each of the last five years, the number of shares repurchased, and the average price paid. (Amounts are rounded.)

Even after the rout in Macy's stock this year, the company's 2011 and 2012 share repurchases are still "in the black." The average price over the entire period since 2011 is still under $50, despite the purchases made above the current share price in the past three years.

Nobody was complaining about Macy's buyback program when the stock price soared above $70 in July -- just four months ago. And Macy's stock price was still above the average buyback price at the beginning of this month. It's convenient to criticize the buybacks now, when the share price has plummeted to a multi-year low. But if the stock bounces back, Macy's buybacks will start to look pretty good again.

Here's an example of a real buyback disaster
Share buybacks aren't always good or always bad; it depends on the circumstances. One example of a truly disastrous buyback program comes from Macy's rival J.C. Penney (OTC:JCPN.Q). In early 2011, under pressure from activist investors, J.C. Penney spent $900 million to repurchase 24.35 million shares at an average price of about $37/share.

Spending this money was extremely (small-f) foolish, because J.C. Penney was about to bring in a new CEO, Ron Johnson, with an ambitious (and expensive) plan to reinvent the brand. This plan was a complete failure and was scrapped after little more than a year. But by that point, sales had evaporated, and J.C. Penney had burned through billions of dollars of cash.

To avoid a liquidity crisis, J.C. Penney issued 84 million shares of stock for total proceeds of $785 million -- an average price of less than $10/share -- in late 2013. Thus, on a net basis, the share repurchase and subsequent share issuance cost $115 million and increased J.C. Penney's share count by nearly 60 million shares.

In other words, even if J.C. Penney recovers, shareholders will ultimately be worse off because of this series of transactions. J.C. Penney has less cash, and each share represents a smaller piece of the company than before. By contrast, if Macy's stock eventually bounces back, its share repurchases at $60 may not look so (small-f) foolish anymore.

The key is future performance
This means we won't really know if Macy's share buybacks were a huge mistake until we see how the company does in the next few years. The management team has executed a tough turnaround before, so it's way too early to count Macy's out.

A turnaround is not out of reach for Macy's.

Macy's already has major initiatives under way to bolster its profitability. It's rolling out a chain of off-price stores -- and testing off-price sections within full-line Macy's stores -- closing some unproductive locations, and testing consumer electronics departments in certain stores through a partnership with Best Buy.

Macy's is also becoming more aggressive about monetizing some of its real estate assets. Some experts think the company's real estate is worth more than its entire market cap! Asset sales may bring a large influx of cash that Macy's could return to shareholders through additional share buybacks (now at a lower stock price).

Finally, at least some portion of Macy's poor results are attributable to transient factors like unseasonably warm weather and a slowdown in tourist spending caused by the strong dollar. These headwinds will disappear with time. If Macy's can get its earnings back on track in the next few years, long-term shareholders will be very happy about its share buybacks.