Coming into 2013, it was clear that J.C. Penney (NYSE:JCP) was in bad shape. Every single earnings report during 2012 had missed expectations, and CEO Ron Johnson was scrambling to salvage his transformation plan. Meanwhile, the stock's value had fallen to just $20, down more than 50% from its early 2012 high around $43. 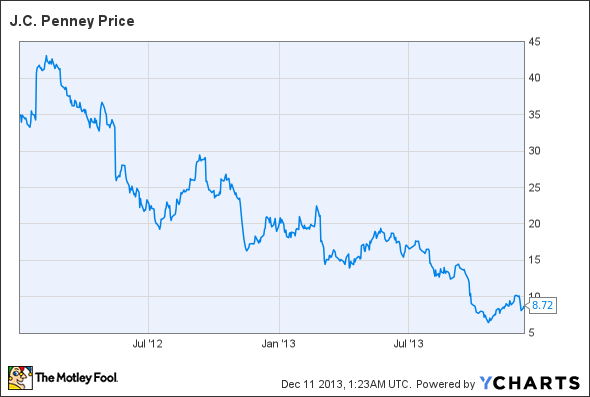 Still, at the beginning of 2013, investors could still hope that with a few ongoing tweaks to its strategy, J.C. Penney would be back on track. Instead, the department-store chain's results have deteriorated even further this year, causing the stock to lose more than half of its value yet again. Today, J.C. Penney's very survival is in doubt due to its persistent losses.

From bad to ugly
Back in February, J.C. Penney's disastrous fourth-quarter earnings report highlighted just how far the company had fallen. Comparable-store sales plummeted more than 30%! The sales miss forced J.C. Penney to put lots of merchandise on clearance, causing gross margin to contract to 23.8% (compared to the long-term target of 40%). This led to an adjusted loss of $1.95 per share in what would typically be the strongest quarter of the year.

A little more than a month after that terrible report, the company finally let go of Johnson. However, the board's decision to bring back former CEO Myron Ullman didn't inspire much confidence. After all, he had been pushed out less than two years earlier after leading J.C. Penney for six-and-a-half years, during which time the stock delivered a negative total return.

Survival at stake
Whereas J.C. Penney executives were able to claim in 2012 that the company had plenty of cash to fund its transformation, these illusions were quickly dispelled in 2013. In mid-April, the company drew $850 million on its credit line to boost liquidity. Shortly thereafter, it arranged a $2.25 billion term loan to cover operating losses and capital expenditures.

Executives stated that these transactions would provide J.C. Penney with plenty of cash for the foreseeable future. However, the company's performance continued to deteriorate, with sales falling and losses widening year over year in each of the first three quarters of 2013. During that period, J.C. Penney burned through a stunning $3 billion in cash.

The retailer arguably hit bottom in late September. After assuring investors one morning that the company did not need more capital, J.C. Penney executives went to their bankers in the afternoon to arrange a quickie stock sale to raise about $800 million. This questionable move has sparked an SEC investigation into whether the company misled shareholders.

Will 2014 be different?
J.C. Penney has shown some signs of improvement in the last couple of months. Just last week, the company announced that comparable-store sales grew 10.1% in November.

However, the sales gain was driven in part by a very easy comparison (remember that sales fell more than 30% in the fourth quarter last year) and heavy discounting. While the company's earnings performance should improve dramatically this fall, analysts still expect a significant loss.

Even though J.C. Penney has finally broken the cycle of falling revenue, just to hit breakeven the company will need to grow sales by about 20% from recent levels while also improving its profit margin. Furthermore, even if the company cuts its cash burn rate by 50% in 2014, it could reach a dangerously low liquidity position next fall.

If J.C. Penney can drive high-single-digit sales growth in 2014 without undermining profitability through overly aggressive discounting, the company will live to fight another day. This could help its stock bounce back next year. On the other hand, bankruptcy risk is still high for J.C. Penney due to its ongoing negative free cash flow. Investors should remain wary of investing in this dangerous stock.