This past week was not kind to the market. The S&P 500 ended the week on a 3.4% slide, and one of the largest culprits of that decline was the energy sector. The Energy Sector Select ETF (NYSEMKT:XLE) -- a bellwether for the energy index, ended the week down close to 5.5%. Like so many other weeks for more than a year now, low oil prices have been a major driving force of the sector's decline. Some of the biggest moves in the energy sector this week, though, were after companies reported earnings. These two reasons were part of the reason Targa Resource Partners (NYSE: NGLS), Rose Rock Midstream Partners (NYSE: RRMS), and Geospace Technologies (NASDAQ:GEOS) were some of the biggest energy movers for the week. 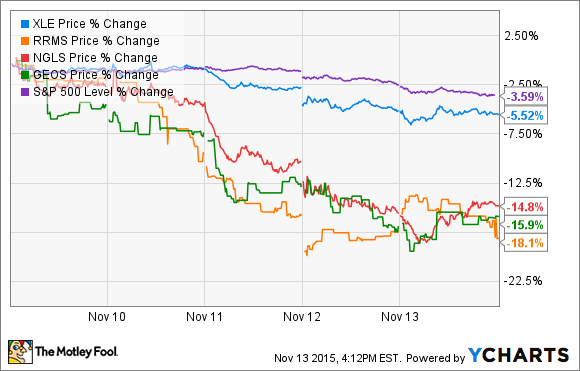 Let's take a quick look back at what happened this past week that made these three company's stocks look so dire.

No applause for Targa's buyout plan
Last week, Targa Resouces Corp. (NYSE:TRGP) announced that it will make an all-stock offer to buy out the remaining stake in Targa Resource Partners and value the combined company at around $9 billion. By itself, it sounds like a good idea. The merger would help to lower the combined company's cost of capital, make its current distribution rates more attainable, and realize some tax benefits that would help the company in the long term. When you consider that just last year Targa's management received a buyout offer from Energy Transfer Equity that would have valued Targa at $15 billion, though, last week's announcement doesn't sound as great to today's shareholders. The lower takeover offer is even causing some law firms to investigate the workings of the deal.

That wasn't the only news that has soured investors to Targa as of late. During the company's recent earnings release, management also noted that its 2016 capital budget would be $600 million, a decline from this year's expected spending of $700 million to $800 million. It appears that investors don't have a lot of confidence in a company that's looking to lower its cost of capital for new projects while lowering its total spend rate for the future.

Rose Rock's distribution outpacing its earnings growth
There are few things dividend investors like more than when a company decides to up its payout to shareholders. When that payout is starting to look to be on shaky ground, it can send shareholders for the exits. That appears to be the case for Rose Rock after its recent quarterly earnings results. Even though the company announced its 15th consecutive distribution increase back in October, this week's earnings showed that its distribution coverage ratio was 0.91, which means cash available for distribution is less than what was paid out.

It may just be a seasonal thing that happens from time to time at pipeline companies, but there are other factors that could be giving investors pause as well. So far, the company has reduced its 2015 capital spending by 21% and announced that its 2016 budget will be lower that previously guided. Also, there is the issue that lower share prices mean that increasing capital through equity raises is more expensive, which can be a vicious cycle when trying to fund new development. If the company can get back to its targeted distribution coverage ratio of 1.1 to 1.2, the company will be OK. If not, this may not be the last time we see Rose Rock on this list.

For several quarters now, Geospace's management has done everything in its power to cut costs and preserve some balance-sheet strength. In an industry where so many are subject to the spending habits of other companies, it's a necessity to have a flexible budget to weather the storm. However, with projects for this downturn to last for quite some time, it's not that surprising to see investors look for greener pastures for the time being.