What: Shares of Priceline Group (NASDAQ:BKNG) fell 14.1% in November, according to S&P Capital IQ data, after the online travel specialist reported weaker-than-expected guidance along with its quarterly results. Even after that drop, however, shares of Priceline are still up nearly 14% so far in 2015: 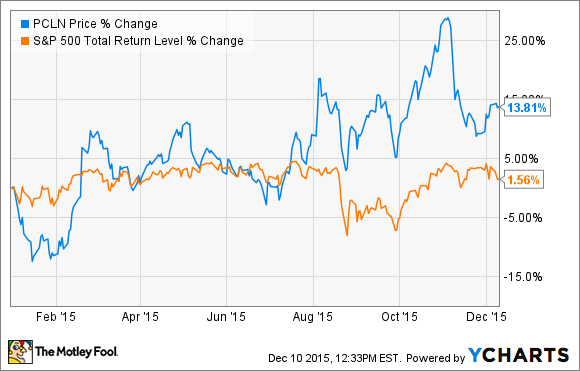 So what: Quarterly revenue climbed 9.4% year over year to $3.1 billion, including an 11.7% increase in agency revenue to $2.35 billion, a 2.8% decline in merchant revenue to just under $600 million, and a 30.3% increase in advertising and other revenue to $160.7 million. But analysts were only anticipating revenue of $3.05 billion. Gross travel bookings climbed 7% year over year, but would have risen a much more impressive 22% had it not been for the negative effects of foreign currency exchange. And again, that result came in above Priceline's guidance for total gross travel bookings in Q3 ranging from a decrease of 1% to an increase of 6% (or 13% to 20% on a constant-currency basis).

But the market was much less enthused by Priceline's guidance for revenue in the current quarter to rise 1% to 8%, and translate to adjusted net income per share between $11.10 and $11.90. Wall Street's models anticipated fourth-quarter revenue growth of 11.2%, and earnings of $12.42 per share.

Now what: As I pointed out shortly after the report, however, note Priceline tends to under-promise and over-deliver on its own guidance. And even then, I think investors should take a lot from management's positive tone during the subsequent conference call, which lends credence to the fact that primarily apart from the temporary problem of currency headwinds and macro challenges in Europe, Priceline's underlying business is as strong as ever. And that strength will become even more evident as Price grows its supplementary revenue sources, including restaurant reservations from last year's acquisition of OpenTable, and vacation rentals from newer sites like Booking.com, which enjoyed a 38% increase in properties listed on its platform over the same year-ago period. In the end, I still think investors would be wise to take advantage of this pullback to open or add to their positions in this industry juggernaut.