Please ensure Javascript is enabled for purposes of website accessibility
Log In Help Join The Motley Fool
Free Article Join Over 1 Million Premium Members And Get More In-Depth Stock Guidance and Research
By Reuben Gregg Brewer – Jan 2, 2016 at 9:35AM

The gold miner has been hit by falling commodity prices, but earnings quality is actually getting better underneath the headlines.

What's happened to Newmont Mining's (NEM -1.02%) earnings? It's a question that seems to have an obvious answer: They've suffered along with gold prices. But look past the obvious and there's something important going on underneath the headline numbers.

Nothing you can do
Pretty much the only thing a gold miner can do about volatile commodity prices is hedge its gold exposure in an attempt to lock in prices for future production. That can only protect a miner for so long and Newmont, as it were, doesn't hedge. So as gold goes, so go Newmont's top and bottom lines. That makes it one of the gold stocks more sensitive to swings in the price of precious metals. 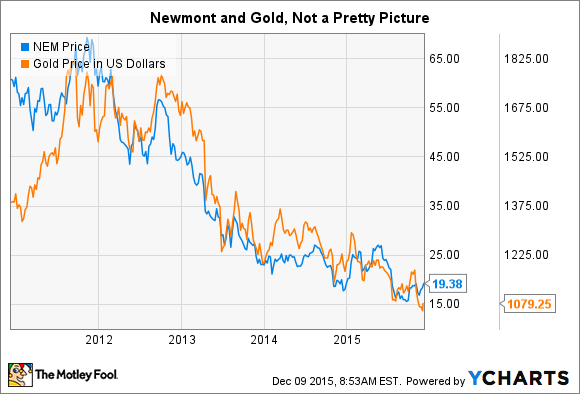 So it shouldn't be much of a surprise that revenue peaked along with commodity prices in 2011. Earnings, meanwhile, have been a mixed bag because of asset writedowns and sales. The dividend, too, has been in turmoil, falling from $1.40 a share in 2012 to a current run rate of $0.10 a share annually (the dividend is tied to the price of gold, so this drop was inevitable). It basically seems pretty bad when you look at the company from a distance.

Deeper dive
But, if you dig a little deeper, Newmont's earnings are actually getting stronger. How is that? In 2012 it cost the miner around $1,175 an ounce to get gold from the ground to the market. For 2015, it expects its all-in sustaining costs to be between $880 and $940 an ounce. Cut the middle and Newmont has been able to trim costs by more than 20%.

The thing is, Newmont believes it can keep its costs in roughly that range for at least the next two years. This is driven by necessity, of course, and all miners are trying to do the same thing. But not all miners are succeeding. For example, El Dorado Gold Corp (EGO -0.17%) has seen its all-in sustaining costs increase from around $730 to $800 an ounce last year to a full-year target of around $875 in 2015. Yes, this miner's costs are lower than Newmont's costs. But its position on the cost curve isn't getting stronger -- it's getting weaker. 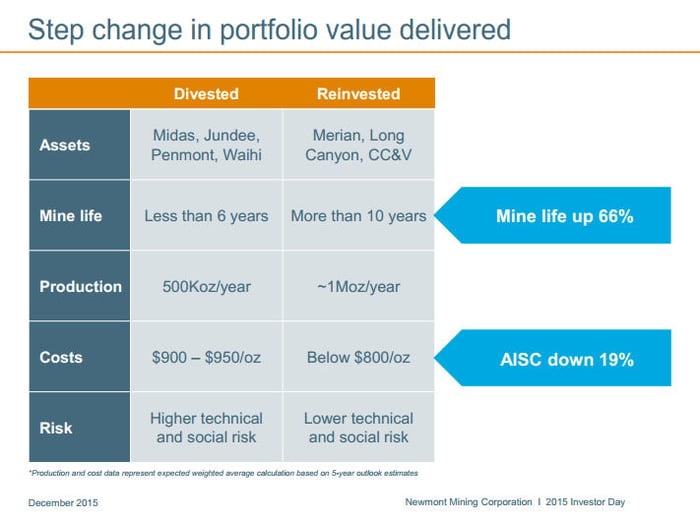 So Newmont's ability to earn is getting better. Part of that has been selling off higher-cost mines and using the gold downturn to buy lower-cost mines. This has helped to reduce costs, but there's another benefit: The acquired mines have also increased Newmont's average mine life. So its reduced cost structure should have longer legs now, too. In other words, despite what it looks like on the bottom line, Newmont is getting better in more ways than one during this downturn.

A survivor
If gold prices continue to linger at low levels, Newmont's top and bottom lines will continue to be under pressure. That's true of all miners. And while all miners are trying to cut back in the current environment, Newmont's ability to lower costs and reposition its portfolio during trying times is a testament to its staying power. It's also the real story of what's going on under the headlines. Yes, the top  and bottom lines have been tough to watch, but Newmont is a miner that's getting better underneath those numbers.