Offshore accounts, shell companies, tax havens -- it might sound questionable, but these are all legal methods U.S. companies and individuals can use to lower their tax liabilities. "Investing through a trust or company organized in a tax haven is a perfectly legal thing to do," said Stewart Patton, a U.S. tax attorney who specializes in taxes for Americans living and investing abroad.

For individuals, the best tax havens offer low or no taxes on capital gains, interest, inheritance and even personal income. Corporations can also save billions in taxes by reporting profits to subsidiaries in countries with favorable corporate taxes and other benefits.

The super-wealthy and megacorporations stand to save millions or even billions by taking advantage of the world's best tax havens. "The No. 1 benefit of a tax haven is the obvious benefit of saving money on taxes," said David Hryck, a New York tax lawyer and finance expert with Reed Smith. Here are the best and most popular countries that offer big tax savings. 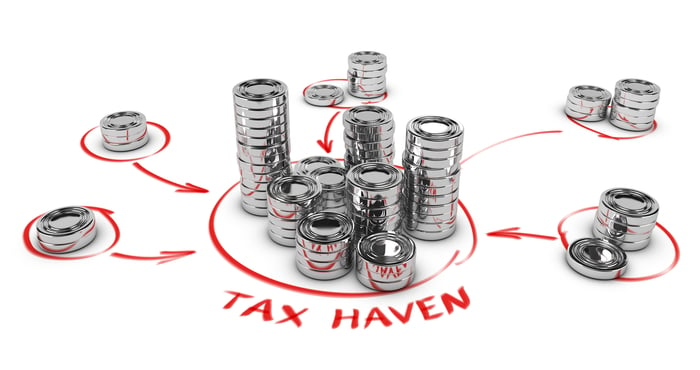 Luxembourg is a small European country that borders Belgium, France, and Germany with a population of 550,000. Luxembourg's tax haven status comes from its business-friendly laws that allow international companies to park portions of their business there to dodge billions in tax bills. About 33% of U.S. Fortune 500 companies have subsidiaries in Luxembourg, according to a 2014 report from Citizens for Tax Justice and U.S. PIRG Education Fund.

Amazon (NASDAQ:AMZN), for instance, has its official European headquarters in Luxembourg and was funneling all sales it made in Europe through its Luxembourg office. The online retailer ended the practice in 2015, instead booking sales with localized branches, a move that "could significantly boost the firm's tax bill in many European countries," according to The Wall Street Journal. Amazon made the changes after the European Union opened an investigation into the tax practices of this and other companies.

The Cayman Islands offer "probably the biggest [tax] loophole now for individuals as well as the multinational corporations," said Crystal Stranger, president of business tax firm 1st Tax. The Caymans are one of "several countries with laws that allow a corporation to be formed and retain assets without paying tax, and when held for business purposes this is perfectly legal and not a tax avoidance strategy." Stranger added, however, that the tax advantages and implications are complex, and probably best handled with the help of a professional.

Isle of Man is termed a "low-taxed financial center," thanks to its lack of capital gains tax, inheritance tax, corporation tax or stamp duty. The island situated between England and Ireland also carries low income tax, with the highest rates at 20% and total amount capped at 120,000 pounds, reported U.K. finance outlet MoneyWeek.

Isle of Man also offers great benefits for pensions. "Many international companies have their employee pension plans held in accounts in this small country due to asset protection and the ability to take benefits from the age of 50 onwards," said Stranger. Only employer-sponsored retirement accounts will benefit from this lax tax code, though, as "individually held international mutual funds are taxed heavily under U.S. tax law," Stranger added.

Located between England and France, Jersey's status as a tax haven rose mid-20th century when many wealthy British citizens moved their wealth to the island. Britain's inheritance tax on amounts over 1 million pounds was 80%, compared to the self-governed Channel Island of Jersey, which had no inheritance tax.

Today, there is still no inheritance or capital gains tax, and Jersey has a standard corporate tax rate of 0% -- with the exception of taxes levied on financial service, utility, and property companies. This has made Jersey a popular tax haven for the U.K., housing $5 billion worth of assets per square mile.

Ireland is often referred to as a tax haven, despite Irish officials asserting that their country is not one. Recently, Ireland made headlines when U.S. drug company Pfizer merged with Ireland-based Allergan, with plans to reheadquarter in Ireland, reported the Los Angeles Times. This tax inversion could help Pfizer dodge taxes on as much as $148 billion in profits held internationally, according to a report from Americans for Tax Fairness.

Another giant American-founded company that is incorporated in Ireland is Apple, which has booked over $180 billion in offshore profits through its international subsidiaries, dodging $59.2 billion in U.S. taxes, according to the Citizens for Tax Justice report. They aren't alone; over a quarter of Fortune 500 companies had subsidiaries in Ireland in 2014, including Google.

Mauritius is an island located in the Indian Ocean several hundred miles east of Madagascar, and is a popular gateway for foreign investments, particularly those directed to India. Mega-corporations with Mauritius subsidiaries include JPMorgan Chase, Citigroup, and Pepsi, reported The Wall Street Journal.

Mauritius does levy a 15% corporate tax, but companies that are tax residents of the island can take advantage of tax breaks granted through double tax treaties. Additionally, capital gains and interest are not taxed in Mauritius, making it an attractive tax haven.

Bermuda has long been a popular tax haven, said Ravi Ramnarain, an independent certified public accountant. "Wealthy individuals who transfer their assets to these countries could benefit from the fact that it may be deemed illegal (from a general standpoint) for the bankers in these offshore jurisdictions to disclose the identities of investors to third parties," Ramnarain said.

Big businesses also turn for low taxation to Bermuda, which levies no corporate tax at all, according to Deloitte. Just over a quarter of all Fortune 500 companies had subsidiaries in Bermuda in 2014, according to the Citizens for Justice report. Google, for instance, has routed foreign profits to Bermuda through subsidiaries in Ireland and the Netherlands, a move which could save the company as much as $2 billion a year in taxes, reported Bloomberg.

Monaco is less than a square mile and has just 36,000 residents. This tiny principality has a giant perk, however: it hasn't charged its residents income tax since 1869. Those that can claim Monaco as their primary nation of residence will keep all of the money they earn.

This has drawn some of the world's wealthiest to the tiny country of Monaco, as one in three residents is a millionaire, reported CNN Money. Monaco's popularity as a home to the super-rich has also made it the most expensive real estate market in the world with $1 million buying just 160 square feet, reported The New York Times. Taxes for corporations are also low, drawing in corporations like rental car company Avis Budget Group to set up subsidiaries in Monaco.

Switzerland's combination of low taxes and a bank system that protects account holders' secrecy above all else have made it a popular destination for funds leveraged overseas to enjoy lower taxes.

This has made Switzerland a popular financial center for individuals and corporations alike. Geneva, the country's capital, is the 13th-largest financial center in the world and one of the most broadly and deeply established in the world, according to the most recent The Global Financial Centres Index from Long Finance.

U.S. companies have taken advantage of Switzerland's tax benefits for years. In 2010, American multinational corporations reported $47 billion in profits to Swiss subsidiaries, according to the Citizens for Tax Justice report. Just under 30% of Fortune 500 companies have subsidiaries in Switzerland, including major businesses like Marriott, Ecolab, Pepsi, Stanley Black & Decker, and Morgan Stanley.

The Bahamas are another top tax haven, thanks to the lack of capital gains tax, inheritance tax, personal income tax, and gift tax. "All of these are extremely beneficial for the wealthy, especially to older wealthy people looking to limit the tax on their inheritance or to start gifting money," said Hryck.

These tax advantages can make the Bahamas an attractive tax haven for U.S. corporations, which reported $10 billion profits to Bahamas subsidiaries in 2010, equal to 123% of the country's own gross domestic product that same year, according to the Citizens for Tax Justice. Wells Fargo Bank and energy provider AES are a couple of the 5% of Fortune 500 companies with subsidiaries in the Bahamas.

This article originally appeared on GoBankingRates.