Please ensure Javascript is enabled for purposes of website accessibility
Log In Help Join The Motley Fool
Free Article Join Over 1 Million Premium Members And Get More In-Depth Stock Guidance and Research
By Tyler Crowe - Jan 6, 2016 at 8:15AM

Enbridge Energy Partners is getting pressured from both above and below as its general partner's debt levels look a little high and its operating subsidiary faces deteriorating results. 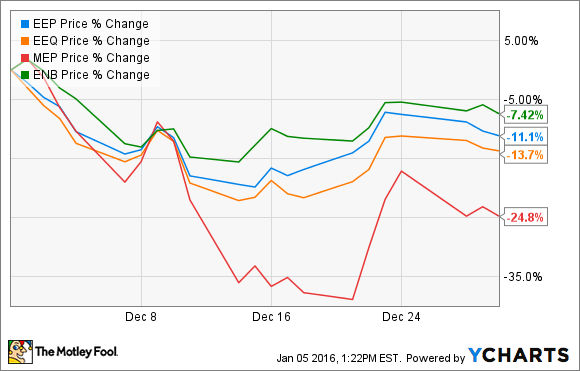 Another aspect that is impacting Enbridge Energy Partners is that it is the parent of Midcoast Energy Partners. A majority of Midcoast's assets are natural gas gathering pipelines in Texas and Oklahoma, which puts them at risk of seeing lower volumes over the next year as gas production around its assets is expected to decline. In a recent analyst note from Credit Suisse, gathering volumes for Midcoast will decline by 8% in 2016 and potentially more in the coming years.

With exposure to lower volumes and a system that isn't well protected with fee-based contracts, Midcoast could see declining EBITDA without some help in the form of new assets from Enbridge Energy Partners.

Now What: Enbridge Energy Partners seems to be stuck in the middle of two situations that look less appealing. Midcoast Energy Partners is likely going to need to have some assets dropped down to it to increase EBITDA, but its share price decline means that it will be harder to fund those transactions. Also, any midstream company that doesn't have an absolutely solid balance sheet is going to get viewed with a little skepticism.

While both of these things could just be temporary setbacks that equate to nothing, it may be worth holding off on taking any action with any stock under the Enbridge name until we see some of the moves needed to improve these two situations.

The Motley Fool recommends Enbridge Energy Partners. Try any of our Foolish newsletter services free for 30 days. We Fools may not all hold the same opinions, but we all believe that considering a diverse range of insights makes us better investors. The Motley Fool has a disclosure policy.