Please ensure Javascript is enabled for purposes of website accessibility
Log In Help Join The Motley Fool
Free Article Join Over 1 Million Premium Members And Get More In-Depth Stock Guidance and Research
By Todd Campbell - Jan 6, 2016 at 8:38AM

The introduction of a new and cheaper gene sequencing model could give this company an edge.

What: The launch of a new lower-cost system that could more effectively compete against DNA sequencing giant Illumina, (ILMN 5.82%) caused shares in Pacific Biosciences of California (PACB 15.47%) to zip 67.5% higher in 2015, according to S&P Capital IQ.

So what: Last fall, Pacific Biosciences of California unveiled its next-generation gene sequencing machine, the Sequel, that costs half as much as its prior-generation sequencer and puts the company in better shape to tango with Illumina, for market share.

Increasingly, drugs are being developed that specifically target genetic mutations and these drugs are crafted in part thanks to an improved understanding of the genetic code and disease's impact on it.

In large part, that insight comes courtesy of gene sequencing machines made by Pacific Biosciences and Illumina and so far, the battle between the two companies has been won by Illumina, which sells machines that range in price from $250,000 to $1 million. Last quarter, for example, sales of Illumina's machines and the consumables they use totaled $550 million, significantly dwarfing Pacific Biosciences product and services sales of $10.3 million.

Now what: Pacific Biosciences' Sequel will reportedly carry a price tag of $350,000 ,and on the company's third-quarter conference call, CEO Mike Hunkapiller said that inquiries by customers during the first couple weeks of its launch were similar to all the inquiries it had received for its prior-generation machine through the first nine months of the year.

Obviously, inquiries aren't sales and Pacific Biosciences has a lot of work to do if it hopes to unseat Illumina, but the revelation was enough to cause investors to reconsider bearish bets they've made against the company because of its second-tier status and ongoing quarterly losses. Since September, short interest has fallen to 13.4 million shares from over 15 million shares. 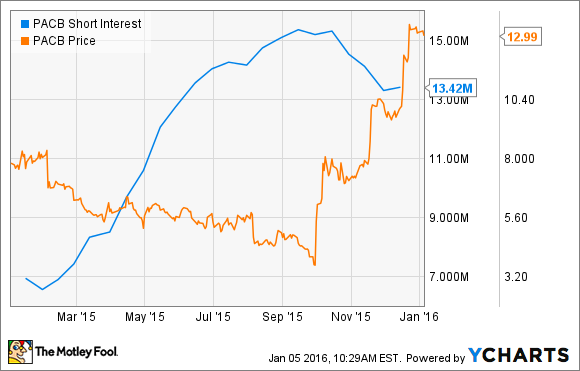 Arguably, the short squeeze could have legs. It will cost the company 75% less to build the Sequel than it cost to build the prior model. However, that cost benefit only matters if unit volume picks up and investors won't know that for a couple more quarters. For that reason, investors may want to wait and see if all those inquiries translate into revenue before jumping in with both feet.

Todd Campbell has no position in any stocks mentioned. Todd owns E.B. Capital Markets, LLC. E.B. Capital's clients may have positions in the companies mentioned. The Motley Fool recommends Illumina and Pacific Biosciences of California. Try any of our Foolish newsletter services free for 30 days. We Fools may not all hold the same opinions, but we all believe that considering a diverse range of insights makes us better investors. The Motley Fool has a disclosure policy.