Please ensure Javascript is enabled for purposes of website accessibility
Log In Help Join The Motley Fool
Free Article Join Over 1 Million Premium Members And Get More In-Depth Stock Guidance and Research
By Daniel Miller - Jan 9, 2016 at 7:49AM

This week was certainly gloomy for most investors, despite some positive economic data in the U.S. Here are some of this week's biggest losers. 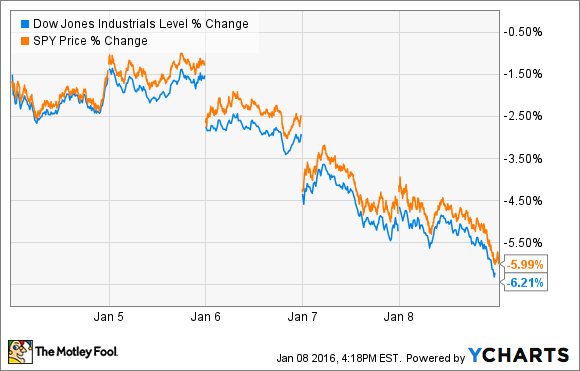 On the bright side, the U.S. created 292,000 new jobs in December according to the Labor Department, which was easily better than the forecast of 215,000 jobs. However, that wasn't enough to offset fears of China's weakening economy. Asian markets started the week off poorly with declines steep enough in mainland China to cause trading halts. Sadly, the trading halt Monday wouldn't be the last one as it was triggered again Thursday amid a global sell-off in equity markets.

While macroeconomic news dominated headlines, a handful of stocks made big moves this week.

Given that news came out that the automotive industry set a record high for new vehicles sales for 2015, reaching nearly 17.5 million vehicles and topping the previous record set in 2000, one might think car companies enjoyed a nice week of trading. That wasn't the case, however, as AutoNation's (AN 1.74%) CEO Mike Jackson made comments that the sales came with consequences. More specifically, Jackson noted that the sales were fueled by discounts and incentives.

"The fourth quarter industry sales environment was more push versus pull. As a consequence, we expect to report significant margin declines for the fourth quarter in both our new and used retail unit sales." AutoNation CEO Mike Jackson said in a press release.

Looking specifically at AutoNation's fourth-quarter results, the company now expects its financial results to show a decline of between $250 to $300 gross profit per vehicle – which suggests that despite a record year of sales, competition might be reaching a point where automakers are dishing high incentives to gain market share and in so doing, hurting profitability. That has long been a fear of investors hoping automakers had learned their lessons during previous incentive wars that ended poorly for all involved.

Those comments, despite a record high in sales for 2015, sent AutoNation's stock down 18% for the week. AutoNation's plunge brought its peers along with it, and even major automakers followed down, just not quite as drastically. 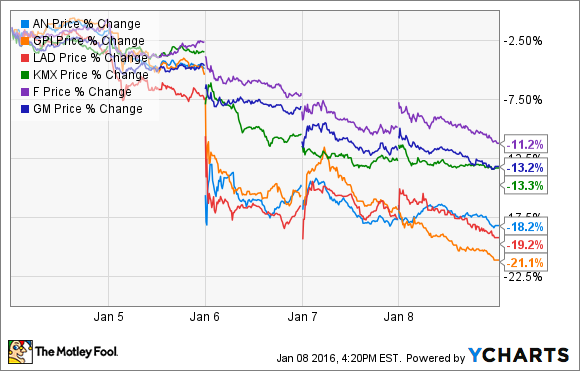 AN Price data by YCharts 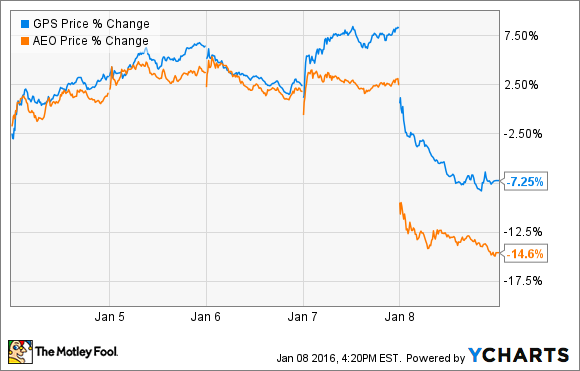 Holiday sales flop?
The Gap, (GPS 1.97%) was down nearly 14% Friday alone, which eradicated the small gains it had through Thursday. The company announced disappointing December comparable sales thanks in part to continued weakness at Banana Republic and another large decline in Old Navy sales performance.

The Gap's comparable store sales declined across the board with a 9% decline at Banana Republic, a 7% decline at Old Navy and a 2% decline at Gap. Gap reported a 4% decline in total sales for the five-week period ended January 2, which was even worse, considering same-store sales which declined 5%.

But Gap wasn't the only retailer trading down this week. American Eagle Outfitters (AEO 4.09%) was down roughly 15% on Friday after releasing disappointing sales. Despite American Eagle's sharp decline Friday, the company's same-store sales looked much healthier than the Gap's. American Eagle announced its same-store sales are up 4% so far during the fourth-quarter, albeit slightly behind Wall Street's forecast of about 4.7%.

"I am extremely pleased with the steady progress made in 2015, with expected annual EPS growth of roughly 70%," said American Eagle Outfitters CEO Jay Schottenstein, in a press release. "I'm optimistic about our future plans, and across the organization, we are diligently focused on driving continued momentum in 2016."

The big bang
But the down market wasn't done taking victims. The Container Store Group (TCS 3.12%) traded down about 40% on Friday alone after announcing weaker than expected third-quarter results, and then dished out equally disappointing guidance for the near-term. Rather than meeting analyst estimates for third-quarter net income of $0.05 per share, TCS posted a $0.04 loss per diluted share.

The Container Store CEO Kip Tindell noted that the company's key initiatives were gaining momentum, but with Friday's 40% drop in share price, it's clear investors and Wall Street disagree. Tindell also noted that the fourth-quarter is starting off a bit bumpy and now management expects fiscal 2015 comparable store sales to decline between 1% and 1.6%.

With the first week of trading in the New Year complete, here's to hoping next week is a much more positive one for investors.

Daniel Miller owns shares of The Container Store Group. The Motley Fool owns shares of and recommends The Container Store Group. Try any of our Foolish newsletter services free for 30 days. We Fools may not all hold the same opinions, but we all believe that considering a diverse range of insights makes us better investors. The Motley Fool has a disclosure policy.