Novavax turned in another strong year in 2015. Read on to find out why. 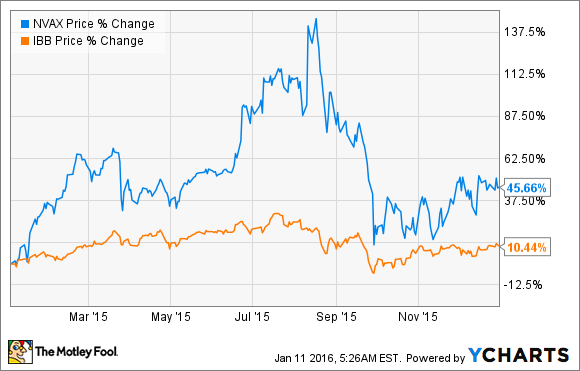 What: According to S&P Capital IQ, shares of the clinical-stage vaccine company Novavax (NVAX 2.68%) gained more than 45% last year, crushing the annual performance of the broader stock market and the industry-specific iShares Nasdaq Biotechnology ETF (IBB 2.41%). The company's strong annual performance is the direct result of the rapid progress of its experimental vaccine for respiratory syncytial virus, or RSV, indicated for pediatric and older patients. Over the course of 2015, for instance, Novavax reported promising mid-stage results in infants and initiated a late-stage study in older adults.

So what: Beside inching ever closer to transforming into a commercial operation after launching a pivotal stage study, Novavax was also able to shore up its balance sheet last year via an $89 million grant from the Gates Foundation. This grant will support the vaccine's further development in pregnant women.

Now what: Per a recent investor presentation, Novavax is planning on launching a second late-stage study for this vaccine in pregnant women in the first quarter of 2016. Given how quickly this vaccine has worked its way through the clinical testing process so far, there's a good chance Novavax could end up filing for the vaccine's approval for two high-dollar indications in 2017.

Commercially speaking, this experimental RSV vaccine is thought to have megablockbuster potential in light of the fact that there are over 37 million cases of RSV per year in just the major markets in Asia, the EU, and the U.S. alone. So, despite Novavax's monstrous 2015, investors shouldn't be surprised if this stock outperforms the IBB again in 2016, and easily surpasses the performance of the broader markets as well.

Of course, the potential downside risk is that something goes wrong during the vaccine's late-stage testing, dashing its hopes for a regulatory approval in the process. The good news is that this vaccine has already been tested in several fairly large mid-stage trials at this point, and it's looked great from a safety and efficacy standpoint for the most part -- although some analysts have questioned the vaccine's ability to confer maternal immunity to unborn infants.

All told, Novavax appears worthy of a deeper dive by seasoned biotech investors who understand the risks inherent in any clinical-stage company.

George Budwell owns shares of iShares NASDAQ Biotechnology Index (ETF). The Motley Fool has no position in any of the stocks mentioned. Try any of our Foolish newsletter services free for 30 days. We Fools may not all hold the same opinions, but we all believe that considering a diverse range of insights makes us better investors. The Motley Fool has a disclosure policy.