Welltower is one of the few bright spots in the market so far in 2016. Here's what could keep the momentum going.

In contrast to most of the stock market, Welltower's (NYSE: HCN) stock price has risen significantly over the past month. I believe there are several reasons to believe the company and its stock could do even better. Here are three reasons that Welltower's profits could rise, and the stock could continue to climb. 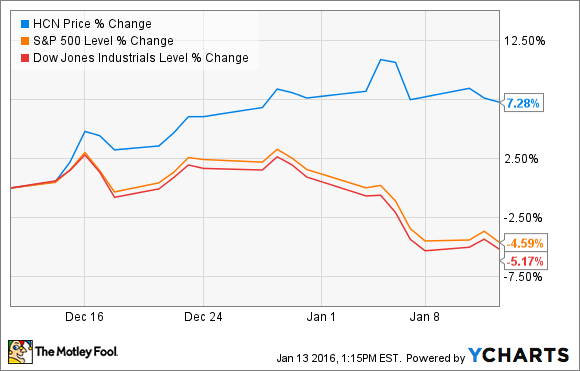 Commercial real estate will perform better than expected in 2016
According to a report by the National Association of Realtors, commercial real estate is actually expected to decline in value by about 1.7% in 2016, due to rising interest rates and low cap rates on properties. It makes sense -- plus commercial real estate has performed exceptionally well in recent years, with prices up more than 50% from 2009 to 2015. Price growth like that simply isn't sustainable forever as homeowners found out the hard way in the late 2000s.

However, there's a good chance that the forecast could be wrong. The same report also projects that GDP growth will accelerate, the consumer price index (CPI) will rise by 3.2%, and unemployment will continue to fall. All of these are positive economic signs, and could translate to higher rental income, which in turn would mean higher property values.

Since the value of a REIT is (theoretically) derived from the equity it has in its properties, if commercial, and particularly healthcare, property values rise in 2016 -- even slightly -- Welltower's stock could get a boost.

Investment activity could accelerate
Welltower has the cash, credit, and desire to pounce on attractive investment opportunities as they arise. In fact, during 2015 the company announced or closed $4.1 billion in investments.

Perhaps the most significant part of this is where those new investments took place. Of that $4.1 billion, more than $1.6 billion was invested in the U.K. and Canada, two largely untapped markets where Welltower is aggressively expanding.

In other words, the company is expanding rapidly into these markets, but they still represent a small fraction of the company's portfolio. Also, demand for healthcare real estate is expected to rise dramatically in both markets. The 75-and-older population is predicted to grow five times as fast as the overall population in the U.K., and Canada's elderly population is projected to grow even faster, at seven times the overall rate. And this is in addition to the aging U.S. population that's already working in Welltower's favor.

As long as the properties' income numbers make sense, if the growth rate proves to be greater than the market expects, it could be a major positive catalyst for Welltower's income and therefore its stock price.

Welltower starts to become a brand name
Welltower partners with some of the most well-known operators in the healthcare field to run its facilities. Just to name a few, these include Sunrise Senior Living, Genesis Healthcare, and Brookdale Senior Living. However, Welltower itself has not been a brand name, yet.

Until recently, Welltower was known as Health Care REIT. While the name was simple and to the point, it didn't exactly establish any brand recognition, which was a primary reason for changing the name. In its most recent corporate presentation, the company said, "Our marketplace approach clearly differentiates us... now our name does as well."

A strong brand name gives a company competitive advantages such as pricing power. This is why consumers are willing to pay more for Pepsi than generic soda. I have no delusions that Welltower will become a household name to the same extent, but the same idea applies here.

The list goes on
This is by no means an exhaustive list of the reasons Welltower stock could rise. For example, the elderly population could grow more rapidly than expected, creating a further increase in demand. Or interest rates could increase slower than expected, keeping borrowing costs low.

On the other side, I don't want to imply that any of these is going to happen or that things couldn't happen that would cause the stock to go down in 2016. However, I do believe that the three positive catalysts listed here are all likely scenarios, and that because of the nature of its business and the favorable demographic trends, Welltower has a greater chance for good news than bad.