Please ensure Javascript is enabled for purposes of website accessibility
Log In Help Join The Motley Fool
Free Article Join Over 1 Million Premium Members And Get More In-Depth Stock Guidance and Research
By Daniel Miller - Jan 14, 2016 at 8:00AM

Despite losing billions over the past few years in Europe, Ford continues to make slow and steady progress on the road to profitability. 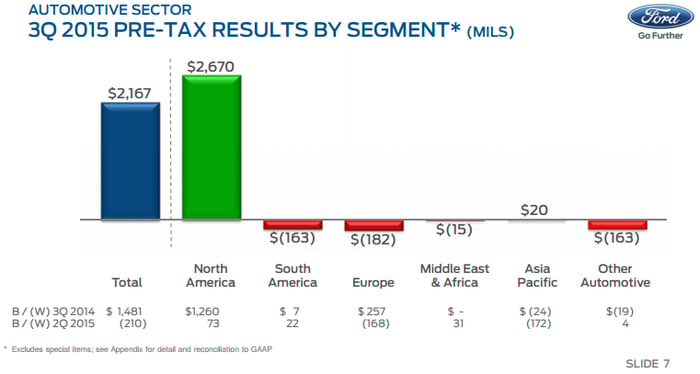 It's no surprise to Ford Motor Company (F 2.88%) investors that North America not only pulls its own weight financially but hauls the profits for the entire company. If Ford's business regions were a basketball team, North America is a superstar and future Hall of Famer, surrounded by bench players forced into a starting role. Fortunately, North America remains extremely profitable and investors hope that Europe's recovery will continue to gain traction and provide a profitable boost for the company sooner rather than later. Ford's results in Europe last year give reason for more optimism that 2016 will be the year it finally breaks even in its troubled region. Let's dig in.

Ford gains market share
Looking at Ford's traditional 20 European markets, Detroit's second-largest automaker sold 124,000 more units last year than it did in 2014 for a total of more than 1.3 million vehicles. If you're keeping track, that's Ford's best annual sales performance since 2011 with a 11% year-over-year gain, favorable when compared to the overall industry's growth of 9%.

Looking beyond Ford's traditional 20 markets, the automaker sold nearly 1.5 million units across all 50 European markets in 2015, which was a 10% improvement compared to 2014 and better than the overall industry's 3% year-over-year sales gain.

Those market-beating gains gave Ford's market share a boost of 10 basis points over 2014 to 8% (in its 20 traditional European markets. or Euro 20), marking the second consecutive year of improvement. With those overall figures out of the way, let's dig into some key takeaways from Ford's 2015 data out of Europe.

King of the hill
Ford has excelled in the past couple of years at increasing its commercial vehicle business. These are large, often work- and/or business-related vehicles that help diversify Ford's vehicle sales from only mainstream passenger cars, SUVs, and trucks to retail consumers. Ford's done well increasing its market share in the U.S., and for the first time in 18 years, it became Europe's No. 1 commercial vehicle brand.

Zooming in on Ford's commercial sales performance, its sales grew 23% in 2015 thanks to increasing demand for the new Transit range and the Ranger pickup. Ford's commercial vehicle market share increased 120 basis points to 12.6% in its Euro 20.

Mo' money, fewer problems
Ford investors know the story all too well: Ford's operations in Europe has burned through roughly $4.6 billion of profits since the beginning of 2012, and, if all goes according to plan, this will be the year the automaker breaks even in Europe. While that may only sound like a moral victory, getting its European operations back to profitability will be critical for the company to increase its earnings going forward -- it can't solely rely on North America forever, if Ford is to appease growth hungry investors.

The good news is that Ford's expensive trims are selling well in Europe, which should provide a small boost to top-line revenues. Ford's Titanium trim of passenger car sales were up 700 basis points, or 7 percentage points, in 2015 compared to the prior year. A couple of specific examples show that the Fiesta's most expensive trim accounted for 27% of its total sales in Europe. The Ranger Wildtrack, also the most expensive version of the pickup truck in Europe, accounted for 34% of its 2015 sales in Europe, which was a solid gain over the 25% it accounted for in 2014.

Individual highlights
As Ford continues to gain market share in Europe, it's fitting to look at what vehicles are helping drive the sales gains. As a rule of thumb, smaller vehicles sell well in Europe and that makes Ford's Fiesta a big winner annually. In fact, the Fiesta sold more than 311,000 units in 2015, which Ford expects to be the No. 1 best-selling small car in Europe once all data is available. It also believes the Fiesta was the No. 2 best-selling car overall, for the fourth consecutive year.

While small cars tend to sell extremely well in Europe, Ford's SUV sales managed to gain a surprising 31% sales gain. The Kuga, known to us as the Escape, posted a 19% sales gain to 102,800 units in 2015, its best annual volume since the first-generation vehicle debuted in 2008.

Ultimately, 2016 is setting up to be a pivotal year for Ford and its investors as it attempts to break even in Europe and generate profits to help bolster the company's earnings performance in the years ahead. And while breaking even might sound like a huge win for investors, it is, considering Ford has lost roughly $4.6 billion in the region since the beginning of 2012. Investors should expect further sales gains in SUVs and expensive trim sales, and as Ford launches eight new or updated vehicles this year, it should lead to another year of market share gains -- all good news for investors.