What happens when a 12-year record of rising dividends meets five years of declining revenues? As the chart above shows, U.S. defense spending more than doubled through the first decade of the new century and then began to subside about five years ago. Current Pentagon projections suggest spending won't return to 2010 levels for years, if ever.

That doesn't sound like it bodes well for Northrop Grumman, which has suffered more than most of the other defense majors. Over the past five years, U.S. defense spending has slumped 19%. America's largest defense contractors, however, largely managed to leverage their dominant positions in the market to grab the bulk of what defense dollars did get spent.

Defense giant Raytheon, for example, held its 2010-2014 revenue decline to just 9% -- less than half the overall slump in defense spending. Tank maker General Dynamics saw its revenues slide only 5% in five years. Best of all was Lockheed Martin, which has suffered almost no decline in revenues at all -- booking just 0.2% less revenue in 2014 than it did in 2010.

But Northrop Grumman? Its revenues are down 15%.

Trouble in defense paradise?
Northrop Grumman is the company behind the Global Hawk long-range unmanned aerial vehicles, the Fire Scout robotic helicopter, and the X-47B carrier-launched drone fighter jet. Given its dominant position in one of the "It" weapons technologies of the 21st century -- drones -- you'd think Northrop would be similarly dominating the nationwide battle for defense dollars this century. Instead, Northrop Grumman is taking it on the chin.

For some investors, this probably raises the worrisome prospect that Northrop Grumman will break with tradition, and choose to forgo its annual dividend increase in 2016, for the first time in more than a decade. Now here's why I don't think that will happen:

Hope for the future
Northrop has undoubtedly suffered more than most from the Defense Department's spending cutbacks. Regardless, analysts who follow the company -- and who recognize the popularity of Northrop's drone products -- believe strongly that Northrop hit its nadir in 2015, and is now poised to grow its revenues strongly again. While the final figures for 2015 aren't yet in, consensus targets on S&P Capital IQ call for Northrop to report $23.8 billion in revenues this year. Four years from now, even as overall Pentagon spending stagnates, projections are for Northrop to be doing more than $30.3 billion in annual business -- 28% more revenue than Northrop makes today.

And indeed, Northrop probably does agree with analyst projections for a turnaround in its business. In 2015, Northrop was awarded a contract to build the U.S. Air Force's new LRS-B stealth bomber, a contract worth $79 billion to Northrop at a minimum. The company's also a leading contender to build the Air Force's new "T-X" training jet -- another project in the multi-tens of billions of dollars. With one of those contracts in the bag already (lawsuits permitting), a good chance at winning the second and the prospect of multiple profitable contracts to build future generations of drone aircraft for the Pentagon, Northrop's financial future looks pretty secure to me.

And that's why I think 2016 will see yet another dividend increase at Northrop Grumman. 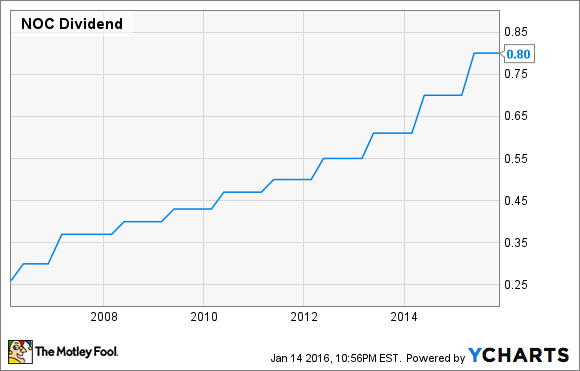 Northrop Grumman has a long history of paying rising dividends to its shareholders. 2016 should be no exception. NOC Dividend data by YCharts.

Fool contributor Rich Smith owns shares of Raytheon. You can find him on Motley Fool CAPS, publicly pontificating under the handle TMFDitty, where he's currently ranked No. 255 out of more than 75,000 rated members.