There's been a lot going on for General Electric (NYSE: GE) this year, but not much of it has been going on in its oil and gas unit. For the past several quarters, oil and gas prices have been a thorn in the company's side.

So why on Earth is GE thinking about purchasing the drilling unit of Halliburton (NYSE: HAL). And why is Halliburton selling?

Out with the old ...
Halliburton has been trying (and trying and trying) to acquire rival Baker Hughes (NYSE: BHI). A deal of this size has raised antitrust eyebrows in the U.S. and abroad, keeping the transaction on ice since it was proposed in November 2014.

Halliburton has been going to great lengths to close the deal. The Wall Street Journal recently reported that Halliburton had met with Bill Baer, the Justice Department's top antitrust official. The company also resubmitted its proposal to the European Commission, where a Jan. 12 deadline is looming. Finally, and most importantly, it has signaled that it's willing to sell off some of its assets, particularly its drilling unit. And that's where GE comes in.

The price is (probably) right
One of the reasons GE is thinking about buying Halliburton's drilling unit now, despite the weakness in the oil and gas sector, is that now happens to be when it's for sale. And conveniently for GE, it may be on sale for a huge discount.

Halliburton has been hit hard by the falling price of crude oil, as cash-strapped customers have been forced to delay or cancel their plans to upgrade their equipment. This situation is likely to scare away some potential buyers and could provide excellent leverage for an interested GE.

Think about your future
The obvious reason for GE to double down on its faltering oil and gas business by buying Halliburton's drilling assets is that it expects a future recovery in the oil sector. But a speedy recovery is far from assured.

The upshot is that nobody knows what's going to happen to the prices of oil and gas in 2016. GE clearly expects continued weakness. In a December presentation, Lorenzo Simonelli, president and CEO of GE Oil and Gas, cautioned investors to "expect 2016 to be down 10%-15%." Nobody seems inclined to make longer-term predictions (and, honestly, such predictions would probably be worthless, anyway).

In his presentation, Simonelli compared the current oil price cycle to three prior cycles: 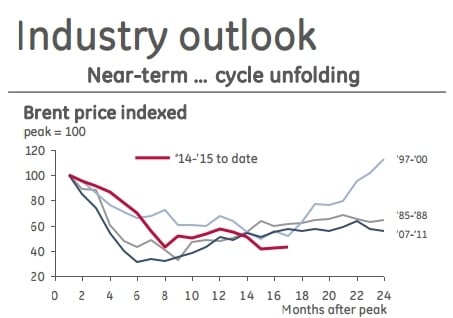 Price is irrelevant
Simonelli said something very telling near the beginning of his presentation:

We don't really focus on the oil price at GE Oil and Gas. We focus on the long-term elements of this industry, and the fundamentals, and when you look at the fundamentals: growing population means growing need for energy, increasing consumption of electricity, and at the end, the resources need to be extracted. So when you look at the long term as we come through this down cycle ... we feel good about oil and gas continuing to increase in demand.

Simonelli makes a good point: Oil and gas prices have been cyclical in the past and will probably continue to be cyclical in the future, so focusing on the long term is the best strategy for investors and corporations. In the case of GE, the size and diversity of the parent company helps to insulate it from some of the near-term concerns that smaller or less-diversified oil and gas services companies such as Halliburton and Baker Hughes are facing right now.

GE envisions its oil and gas division as a "full stream" company -- one that operates in all three segments of the oil and gas industry: upstream (extraction), midstream (transportation and storage), and downstream (refining, processing, and distribution). In this context, the acquisition of Halliburton's drilling unit makes sense: It will augment GE's existing upstream businesses in onshore drilling trees and subsea production systems, risers, and blowout preventers.

The Foolish bottom line
GE's potential acquisition of Halliburton's drilling unit aligns with the goals of GE Oil and Gas to become a "full stream" services provider to the oil and gas industry. What's not clear, though, is whether this vision will become a reality -- or how long it will take to get there.

Even if antitrust regulators approve the Halliburton-Baker Hughes merger and Halliburton agrees to sell its drilling unit and GE is the buyer (already three big ifs), there is no consensus -- even from GE itself -- on how long it will take for such an acquisition to begin paying off. Certainly, oil prices would need to recover enough for upstream companies to begin making investments in their drilling equipment again. Because of technological progress and the advancement of green energy, though, rapid growth is not assured.

Amidst so much uncertainty, investors would be better of not buying or selling any of these companies based on this potential transaction.