Taking a close look at your winners can present some insights. See what Selena Maranjian has to say about some of her own biggest holdings. 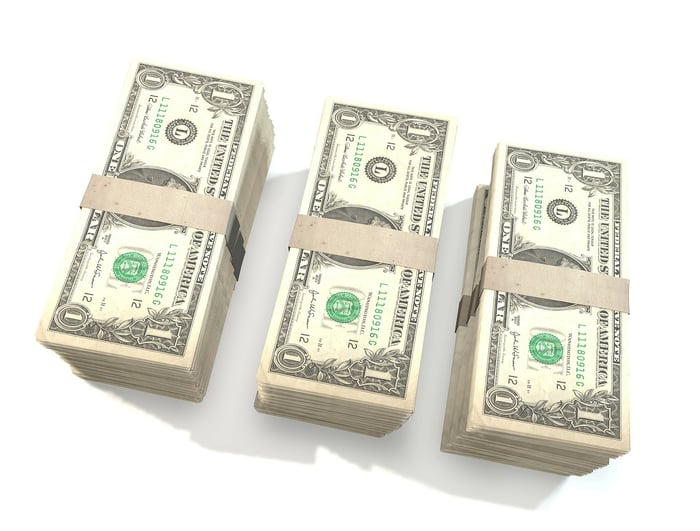 My biggest holdings represent a lot of dollars. Image: Pixabay

I've had some great successes in my personal investing, and plenty of very regrettable investments, too. A glance at my biggest stock holdings will reveal my best -- or smartest -- investments. That's not surprising, since I have let many winners run and those that have grown the most significantly make up most of my biggest holdings.

You may want to consider three of my top holdings for your own portfolio, as I still have high hopes for further growth from them. They offer a few investing insights, too.

Berkshire Hathaway encompasses a lot of insurance and also other businesses, such as an entire railroad. Image: Pixabay.

Berkshire Hathaway
Warren Buffett is a hero of mine. I have so much faith in him that his company, Berkshire Hathaway (BRK.A 1.66%) (BRK.B 1.71%) is my biggest holding. It's not the one that has grown the most, though, since it was already a huge company when I first bought into it and most of its businesses are not ones that grow at an extremely rapid clip. In case you're not familiar with the company, It's at heart an insurance company, but is also a major conglomerate, with operations in railroads, energy, home building, jewelry, furniture, paint, private jets, candy, recreational vehicles, ice cream, chemicals, newspapers, underwear, tools, foodservice equipment, and car dealerships, among others. It also holds major stock stakes in companies such as Coca-Cola, Wells Fargo, American Express, and IBM.

Berkshire Hathaway has averaged annual gains of 14% over the past 25 years, and has handily topped the S&P 500's performance over the past 10, 15, and 25 years, too. The stock offers no dividend, but that's because Buffett is plowing profits into growing the companies he oversees and boosting Berkshire's value.

Berkshire stock is attractively priced these days, with its recent and forward-looking price-to-earnings (P/E) ratio well below its five-year average. It's a sturdy company suitable for a wide range of investors, as it sports many defensive businesses that tend to hold up well in flagging economies as well as booming ones. We need insurance no matter what, for example, and electricity, too. Don't expect rapid growth, but do expect growth.

Apple
I've held a few shares of Apple (AAPL 2.14%) for less time than I've been a Berkshire shareholder, but they have grown in value much more briskly -- nearly eight-fold, in fact. Apple is the only one of my top holdings to offer a dividend, and there's a useful lesson in it. For starters, Apple paid no dividend when I first bought in, but began paying on in 2012. At the time, its yield was around 1.7%. For anyone buying the stock today, the dividend is yielding 2.1%. Here's the thing, though: For me, the dividend yield on my purchase price a fat 16.7%. Why? Because the dividend was increased by an annual average of 11% over the past three years, and because the stock price has appreciated considerably since I bought it, leaving me with a relatively low cost basis. This is a great example of what great investments companies with growing dividends can be.

Is Apple still a promising investment? You bet, at least in my opinion. It's a technology powerhouse, with a market cap topping half a trillion dollars, more than $230 billion in annual revenue, annual free cash flow near $70 billion, and net profit margins topping 20% for many years in a row now. Forbes has estimated  its brand to be the most valuable one in the world, with a value of $145 billion. That powerful brand gives the company the ability to charge premium prices and it drives a lot of demand for products, too.

Apple reports its first-quarter results in late January, and its 2015 was rather strong, with iPhone sales surging 52% to $155 billion, and services such as iTunes growing by 10% to $20 billion. iPad revenue dropped 23%, but still contributed $23 billion, and the new iPad Pro is likely to give sales of the device a boost. CEO Tim Cook cited the company's "strongest product lineup yet, including iPhone 6s and iPhone 6s Plus, Apple Watch with an expanded lineup of cases and bands, the new iPad Pro and the all-new Apple TV which begins shipping this week." Meanwhile, Apple is also moving aggressively into promising regions abroad, such as China, where it has already become the top smartphone seller.

Apple's valuation is appealing, too. Its recent and forward-looking P/E ratios are both below 11 and that's well below its five-year average of 14. Its price-to-book value, price-to-sales, and price-to-cash-flow ratios are also below its five-year averages. Apple is committed to rewarding shareholders, not only via its dividend, but also via share buybacks. Last year it expanded  its capital return program to $200 billion, planning to return that much to shareholders by the end of March 2017.

Netflix
Finally, there's Netflix (NFLX 2.72%). While the shares I own have appreciated in value about 4,000%, it has not happened smoothly. The company has had some missteps, such as when it announced it was splitting into two businesses, with its flagship DVDs-by-mail business to be called Qwikster. Within a few months, the stock lost half its value. The company recovered and went on to grow, and recently sported more than 70 million members. Earlier this month, Netflix debuted service in a host of new countries and new languages, as it ramps up its global expansion

Still, it's been a bumpy ride and that's likely to persist in coming years. Over the past decade, annual returns for the stock feature a handful of triple-digit gains, a few years of losses, and a few more conventional performances. The company has some great advantages, such as a well-known brand, compelling content, and recurring revenue from subscriptions. It also faces some meaningful challenges, such as the steep cost of acquiring and producing content and growing streaming competition from Amazon.com, HBO, Hulu, and more.

The main lesson my Netflix investment offers is the importance of confidence and patience. I had to remain confident in the company's ability to right itself after missteps and in its future potential, and I had to be patient. Many people are tempted to sell once they realize a certain gain in a stock, such as a 25% bump or doubling their money. But if you focus on long-term potential and hang on as long as you believe, you may be rewarded with much bigger gains.

Take a little time to think about your own top holdings, to see whether there are some lessons there that can help you with other investments.

Longtime Fool specialist Selena Maranjian, whom you can follow on Twitter, owns shares of Amazon.com, American Express, Apple, Berkshire Hathaway, Coca-Cola, and Netflix. The Motley Fool owns shares of and recommends Amazon.com, Apple, Berkshire Hathaway, Netflix, and Wells Fargo. The Motley Fool has the following options: short March 2016 $52 puts on Wells Fargo. The Motley Fool recommends American Express and Coca-Cola. Try any of our Foolish newsletter services free for 30 days. We Fools may not all hold the same opinions, but we all believe that considering a diverse range of insights makes us better investors. The Motley Fool has a disclosure policy.