Southern Co.'s got over a decade of hikes behind it, but one big corporate move is worth watching on the dividend front.

Southern Company (SO -3.55%) is one of the largest utilities in the United States. With 15 years of annual dividend increases and a yield of around 4.5%, it's a favorite of dividend investors. But Southern is making a big move in 2016 to expand its business and continues to spend heavily on utility projects. So it isn't unreasonable to wonder if Southern Company will raise its dividend in 2016 or not. The company is strongly hinting at a yes, but its still worth watching the dividend. Here's why.

Functionally, yes
Southern Co. has historically raised its dividend in the middle of year. The last increase was announced last May, with the dividend paid that June. So, technically speaking, as long as the dividend doesn't get cut, Southern Co. will have a higher dividend this year than last year. In other words, it doesn't need to raise the disbursement to extend its streak to 16 years.

But that's not how dividend investors want to see the annual streak extended. They want an actual increase to occur during the year. So as May approaches, dividend-focused shareholders will be watching closely for the news of the next increase. But will they be pleased with what they read? 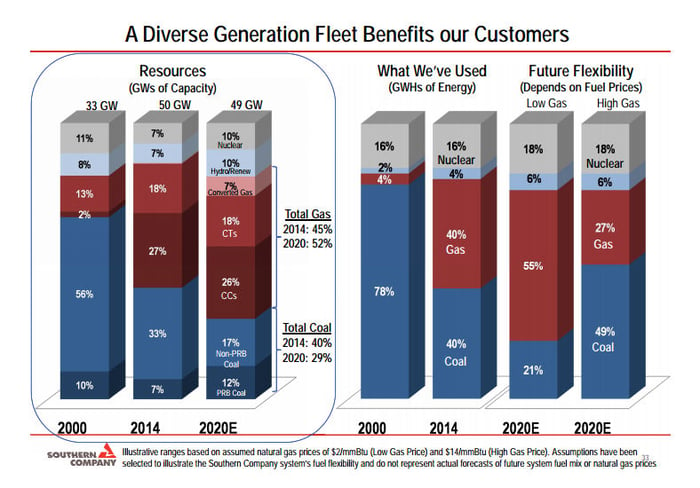 Big changes
To Southern Co.'s credit, it has been making huge changes to its portfolio, decreasing its reliance on coal and increasing its exposure to cleaner options such as natural gas and renewables. That's great and has provided the company with the ability to shift between the cheapest fuel options. However, there are still two big projects being worked on that have, well, not gone as well as planned: a clean-coal plant with carbon capture technology, and a nuclear facility.

But despite the delays, cost overruns, and write-offs related to these projects, Southern Co. hasn't wavered in its support of the dividend. It's increased right through the tough spots. With a long operating history, management knows that, sometimes, big construction projects don't go as well as hoped. But, once complete, the company will be better off. So Southern Co. still sees the long-term payoff from these big expenses.

However, there's something else taking shape at Southern Co. -- an acquisition. Southern Co. is buying natural gas utility AGL Resources (NYSE: GAS). It's a pretty big deal, essentially doubling the number of customers that Southern Co. will serve in its largely Southeast region. The price tag is $8 billion plus the assumption of around $4 billion in debt. 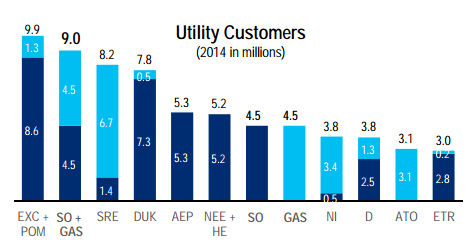 Southern will have a quick growth spurt from the AGL acquisition. Source: Southern Company.

Southern Co. expects the deal to add to earnings from the get-go and believes it will allow for the "opportunity to raise the dividend growth rate, subject to board approval." So, on that score, it looks as if dividend increases, and larger ones at that, are what management is gearing up for.

But there's one small wrinkle. The acquisition, which is expected to close in the second half of 2016, still has to get through regulators. That includes regulators in each state where the combined company will operate. Southern Co. has generally positive relationships with its regulators, but all it takes is one regulator to turn the deal into a problem spot.

The troubles facings Exelon's (EXC -6.10%) proposed $6.8 billion acquisition of Pepco Holdings (NYSE: POM) is a prime example of what can go wrong on the regulatory front. Despite Exelon making multiple financial concessions, Maryland and Washington D.C. still oppose the deal because regulators say it will cause harm to the competitive landscape. One of the big fears, it seems, is that Exelon will stifle the growth of renewable power investment if the merger is consummated.

With Southern's difficult coal and nuclear projects making front-page news over the past couple of years, it's realistic to be concerned that regulators might not be as easygoing as they once were.

Yeah, most likely
The easy answer is that Southern Co. appears to want to raise the dividend again this year and in future years. In fact, management has pretty much stated that it wants to grow the dividend even faster than it has been of late. So I would expect a dividend incerase come May or June. But I would pay close attention to the AGL acquisition and what regulators have to say about the deal. Any problems here could put a fly in Southern Co.'s dividend ointment.