Please ensure Javascript is enabled for purposes of website accessibility
Log In Help Join The Motley Fool
Free Article Join Over 1 Million Premium Members And Get More In-Depth Stock Guidance and Research
By George Budwell - Feb 9, 2016 at 10:23AM 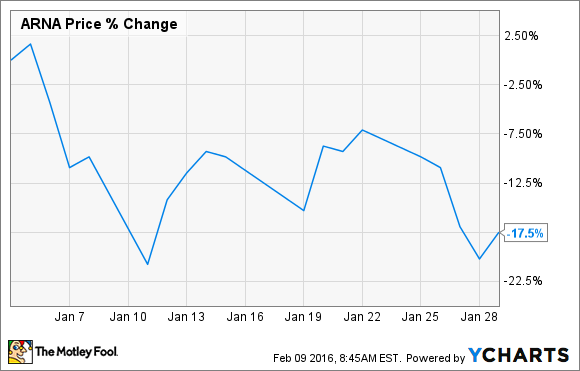 What: According to data provided by S&P Global Market Intelligence, shares of Arena Pharmaceuticals (ARNA) dropped by more than 17% in January. Given the lack of negative catalysts during the month, its poor showing appears to simply reflect the widespread sell-off in the biotechnology industry, which hit small-cap companies particularly hard.

So what: During its presentation at the J.P. Morgan Healthcare conference in January, Arena's management said that the company plans to pivot more toward its rich pipeline of drugs targeting G protein-coupled receptors, and away from its FDA-approved fat-fighting pill Belviq, in order to create shareholder value going forward. The commercial development of the obesity drug market has been painfully slow since Belviq's approval, and the environment hasn't exactly improved for it with the approval of competing pill Contrave from Orexigen Therapeutics (NASDAQ: OREX).

Now what: Arena recently announced a licensing and collaboration agreement with privately held German giant Boehringer Ingelheim to develop drug candidates targeting orphan central nervous system receptors. Under the agreement, Arena is eligible for milestone payments of up to $262 million. That's welcome news, in that those cash influxes would help the biotech advance its wholly owned clinical candidates without requiring it to wipe out shareholder value via multiple secondary offerings.

Having said that, I won't be picking up shares in this small-cap drugmaker until its pipeline produces another late-stage product candidate. The slower-than-expected commercial uptake of both Arena and Orexigen's anti-obesity medications means that these companies are essentially back to functioning like risky, clinical-stage entities. Unfortunately, the market has basically turned its back on developmental biotechs this year, and unless the mood changes, Arena's shares could fall even further.