The container leasing company is due to report on Thursday morning.

A slowing global economy is putting the brakes on demand for shipping containers, and that is having a big impact on Textainer (TGH 1.32%). That was evident in its earnings report last quarter, when revenue declined 6.2% year over over while earnings slumped 82.1%. Unfortunately, this quarter the company will more than likely experience another decline in both revenue and earnings because operating conditions were expected to remain very challenging.

First, let's review
Before we look at what we might be able to expect to see in those results, let's take a step back for a refresher on the third quarter. Here's a look at where the company felt the most pressure last quarter:

The core container leasing business was fairly stable and flat year over year because Textainer recorded $2.6 million in proceeds from a bankruptcy settlement in the third quarter of 2014. That said, the company's fleet size was much higher last quarter and that increase was offset by weaker rental rates and lower utilization after demand for containers was much more anemic than anticipated. Furthermore, the company other higher-margin business segments weakened materially due to poor container pricing. That was the driving force behind the decision to reduce its quarterly dividend from $0.47 per share to $0.24 per share.

Here's the outlook for the third quarter
These weak conditions were expected to persist during the fourth quarter, according CEO Phillip Brewer, who noted in last quarter's press release that:

The outlook for the remainder of 2015 and early 2016 remains challenging. Improved performance requires an increase in demand, container prices and/or interest rates. We do not expect a significant increase in demand until at least Chinese New Year and possibly much later. Maturing leases that are extended will be repriced at lower rental rates. Container prices are not expected to increase in the near term and any increase in interest rates, if it does occur, is expected to be minor. We expect these factors combined will lead to lower financial results in 2016.

None of those positive catalysts emerged during the fourth quarter. In fact, global economic conditions deteriorated further. China's economy, for example, only grew by 6.8% last quarter, which was down from 6.9% during the third quarter and below the 7.3% it grew in the fourth quarter of 2014. Meanwhile, global steel prices, which are critical to container prices, slumped last quarter partially due to product dumping by Chinese steelmakers. Finally, while the U.S. Federal Reserve raised interest rates for the first time in a decade, other central banks reduced their interest rates during the quarter. These factors likely put a lot of pressure on Textainer's earnings during the quarter.

Keep an eye on possible acquisitions
Those negatives aside, there is one thing investors should watch. Last quarter, Brewer tried to calm investors worries about the demand downturn by reminding them that Textainer was "well positioned" to overcome the current cyclical cycle in the industry because it had "the largest fleet and lowest operating costs in the industry." However, that's no longer going to be the case after rivals Triton and TAL International (NYSE: TAL) announced in November that they would merge to create the world's largest intermodal container lessor. As the slide below shows, prior to the merger announcement, Triton and TAL International were the No. 2 and No. 3 players, respectively, behind Textainer, but will now be the undisputed global leader. 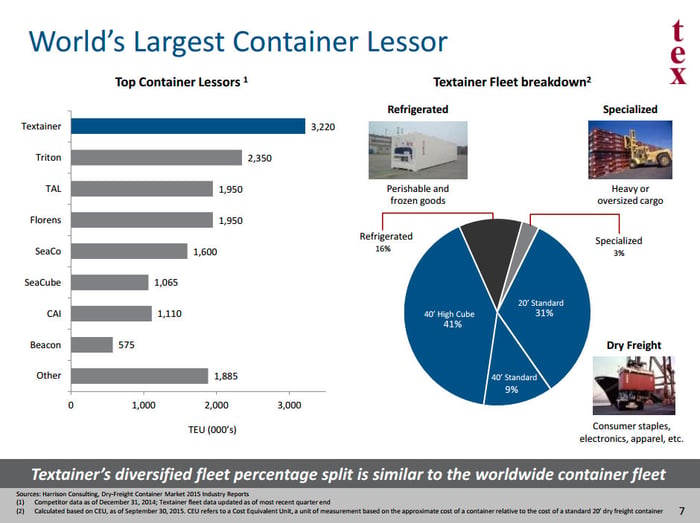 This shifts the balance of power in the sector and could prod Textainer to be on the lookout for its own merger partner. Also, TAL International and Triton are merging partly because they see significant cost synergies, making the transaction 30% accretive to net income per share for TAL International investors once those synergies are captured. With so many challenges facing the industry right now, this could be prime time for Textainer to be on the prowl for a merger partner of its own.

Investor takeaway
Given how tough things are in the container leasing industry these days, Textainer will more than likely report a pretty weak quarter on Thursday. In addition, with the global economy off to a poor start in 2016, the company's outlook will likely be very muted as well. Having said that, with these challenges come opportunities and one to keep a close eye on in 2016 is whether Textainer is able to make a highly accretive acquisition that would enable it to reclaim its crown as the global container leasing leader.