Please ensure Javascript is enabled for purposes of website accessibility
Log In Help Join The Motley Fool
Free Article Join Over 1 Million Premium Members And Get More In-Depth Stock Guidance and Research
By Brian Feroldi – Feb 10, 2016 at 10:23AM

What: Shares of Shire PLC (NASDAQ: SHPG), a biotechnology company focused on creating drugs that treat rare diseases, fell by more than 15% in January, according to data from S&P Global Market Intelligence. 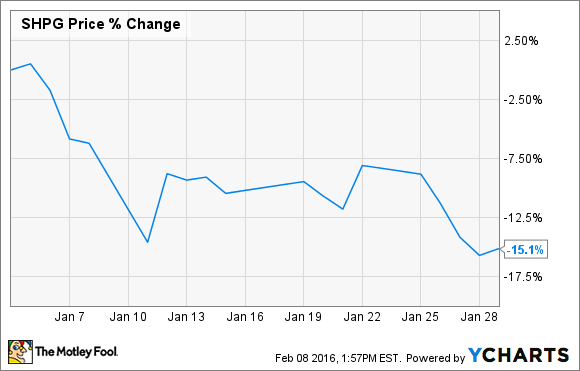 So what: Despite the stock's downward movement, Shire gave investors plenty of reason to cheer during the month

However, these news releases pale in comparison to the announcement that Shire would be spending $32 billion to acquire Baxalta (NYSE: BXLT), a huge biotechnology company with a strong presence in the hematology and immunology markets. The deal has already been blessed by Baxalta's board of directors. Once completed, it will turn Shire into the biggest rare-disease-focused biotech company in the world.

Now what: The market was taken off guard by the Baxalta acquisition news -- shares fell nearly 10% after the news broke of the deal, likely over possible tax ramifications for shareholders. While Shire's executive team was confident that the deal would remain tax free for shareholders, it's possible that the IRS could play hardball and demand a tax huge payment.

Assuming regulators and shareholders approve the deal, then the transaction is expected to be completed sometime during the summer. However, until we get a definitive answer to the lingering tax question, it's tough for me to get excited about this deal's potential.