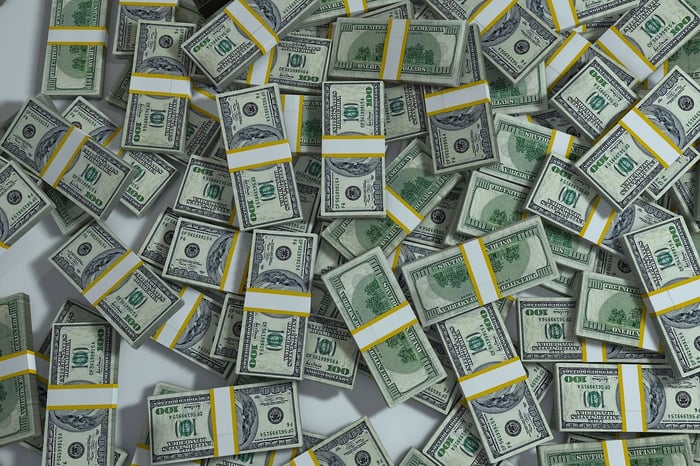 After months of negotiations, news finally broke today that Baxalta (NYSE: BXLT) agreed to be acquired by Shire PLC (NASDAQ: SHPG). Baxalta has confirmed that it's selling itself in a deal valued at $32 billion. Once completed, the combined entity will be the largest rare disease-focused company in the world. Shareholders of Baxalta are slated to receive $18 in cash and 0.1482 shares of Shire, which values Baxalta's stock at $45.57 based on Shire's Jan. 8 closing price.

As expected, Shire provided its investors with a long list of positives to justify its push to make the deal happen. Combining the two companies' pipelines creates a total of 30 recent and planned product launches that hold an estimated $5 billion in sales potential. By 2020, Shire believes that the combined companies' revenue could exceed $20 billion, with the majority of sales coming from orphan drugs that treat rare diseases.

Over time, Shire also expects that the deal will provide significant cost savings. It expects to realize synergies of more than $500 million a year and could also bring substantial tax savings. Shire estimates that the combined company will have a non-GAAP effective tax rate of 16%-17%, which is a lower rate than Baxalta is paying today.

Wall Street isn't impressed
While everything sounds good on paper, the market isn't cheering the deal. Shares of Shire fell nearly 10% after the news broke, but that's not much of a surprise, since it's common for shares of the acquiring company to take a hit. As is typical, there are questions about whether it paid too much to make the deal happen.

However, what is surprising is that shares of Baxalta are trading lower on the news as well. Shares closed today at $39.10, which is lower than the priors day's closing price of $40 and represents a substantial discount the the $45.57 takeover price.

So is this an arbitrage opportunity, or is there something else going on?

Tax concerns
The disconnect in the current market price and the offering price appears to be over potential tax issues that could arise from the deal. Baxalta has only been a publicly traded company for about six months, having been spun out from its parent, Baxter International (BAX -0.73%), this past summer. The spinout was a tax-free transaction, so Uncle Sam didn't get a slice of the pie at all.

Since Shire is based in Ireland, it enjoys a lower tax rate than Baxalta, which means that if this deal goes through, then the U.S. will lose yet another tax-paying pharmaceutical company. With many presidential candidates calling for plans to stop these kinds of deals from happening, it's possible that the IRS might not allow this to remain a tax-free transaction.

Shire's executive team tried to assure investors that it went to extensive lengths to make sure that the deal will remain tax-free for Baxter International shareholders -- that appears to be the primary reason that negotiations took so long -- but with the U.S. Treasury coming under huge political pressure, it's possible that the IRS could demand a tax huge payment.

How huge? One analyst estimated that if the government decided to play hardball, the tax bill could reach $10 billion. While the odds that that will happen appear to be quite low, they are not zero, and that looks to be a reason to doubt that the deal will go through.

This transaction is expected to close by the middle of this year, assuming shareholders and regulators give it the thumbs-up, so we'll know soon enough if today's share-price decline was warranted.

Brian Feroldi has no position in any stocks mentioned. The Motley Fool recommends Baxter International. Try any of our Foolish newsletter services free for 30 days. We Fools may not all hold the same opinions, but we all believe that considering a diverse range of insights makes us better investors. The Motley Fool has a disclosure policy.