Please ensure Javascript is enabled for purposes of website accessibility
Log In Help Join The Motley Fool
Free Article Join Over 1 Million Premium Members And Get More In-Depth Stock Guidance and Research
By George Budwell - Feb 11, 2016 at 11:59AM

Biogen's slowing growth has investors looking towards the future. 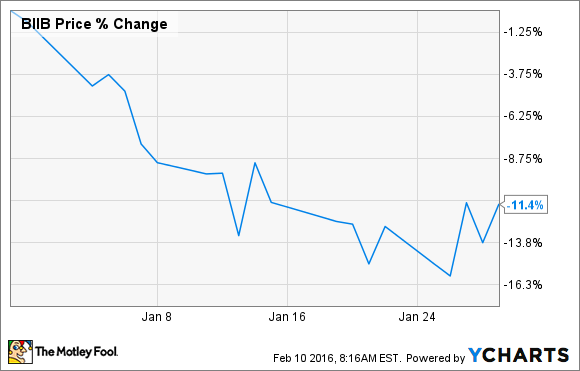 What: Shares of the biotech giant Biogen (BIIB 1.60%) fell by more than 11% last month, according to data provided by S&P Global Market Intelligence. The drugmaker's monthly tumble was due to the downturn among all-things biotech, along with the domestic sales of its top-selling multiple sclerosis drug Tecfidera leveling off in recent quarters.

So what: Biogen is one of the largest holdings of the iShares Nasdaq Biotechnology ETF (IBB -0.02%), making it a key name to watch in terms of the market's sentiment regarding biotechs at large. After all, Biogen's poor showing last month probably contributed significantly to the IBB's January blues: 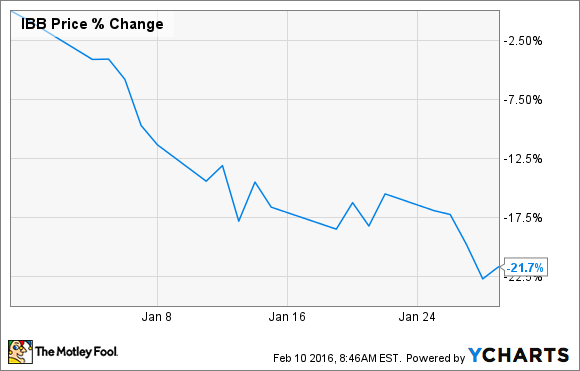 Now what: With Biogen's top-line expected to grow by a modest 6% this year, the market's focus is likely to turn toward the biotech's clinical activities moving forward. The good news is that Biogen is planning on plowing roughly 20% of its total revenues into R&D this year in hopes of kick-starting its growth engine.

Among the biotech's more noteworthy clinical activities, Biogen and its partner Ionis Pharmaceuticals are reportedly making steady progress with their late-stage experimental treatment, nusinersen, for spinal muscular atrophy that might result in an accelerated regulatory filing sometime soon. Regardless, this collaboration should start to produce top-line data readouts in the first half of 2017, possibly leading to Biogen's next major new drug.

Although Biogen probably won't turn in a great 2016 in terms of its share-price performance, I think the stock remains a compelling buy longer term because of the company's emerging clinical pipeline that sports potentially groundbreaking new drugs like aducanumab for Alzheimer's disease and, of course, nusinersen for spinal muscular atrophy.