What: Shares of Southwestern Energy (SWN 0.27%) slumped as much as 10% by 3:15 p.m. EST on Tuesday. That's despite the fact that David Tepper's Appoloosa Management bought a big stake in the company.

So what: According to the fund's latest 13-F filing, Tepper bought 4.3 million shares of Southwestern Energy during the fourth quarter. That purchase was part of a very large bet made on energy stocks, which also included buying 9.4 million shares in energy infrastructure giant Kinder Morgan (KMI 0.54%) and big positions in a number of other energy midstream companies. In fact, the bulk of his energy-related buying last quarter was midstream companies, which made his purchase of Southwestern Energy really stand out.

Tepper, it would seem, is betting that the energy sector has bottomed and is picking up some of the most beaten-down names, which would certainly describe both Kinder Morgan and Southwestern Energy: 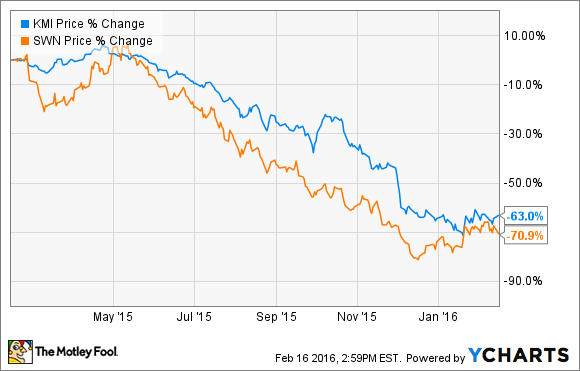 Despite that growth potential and Tepper's bullishness on natural gas, Southwestern Energy is taking today. It's anyone's guess why the stock is slumping, because all of Tepper's other buys are up today. This could be a bit of profit-taking because Southwestern Energy's stock is up 50% in just the past two months, or because oil slumped today. Either way, it's not thesis-altering.

Now what: Tepper buying stock in Southwestern Energy is clearly not thesis-changing either. Instead, this is a company that lives and dies with natural gas prices, which have remained stubbornly low because there's just too much gas on the market right now. What's more important to watch for are signs that the supply situation is getting under control, as well as signs that demand is heating up. Everything else is really just noise.